Augment is about to get, uh, augmented with $4.7 million in funding. The enterprise augmented-reality company uses iPads and smartphones to help people visualize how a new retail kiosk might look in a real store.

Augment’s platform takes the form of a simple mobile app, which has already been downloaded more than 2 million times on iOS and Android. It is the No. 1 app in the augmented reality section of the app stores. The company has 200 customers in 35 countries, and they include companies such as Coca-Cola Germany, Engie, and L’Oréal.

“We build a platform for object visualization in the real world, using augmented reality,” said Jean-Francois Chianetta, CEO of Augment, in an interview with VentureBeat. “It’s all about removing uncertainties from the act of buying or the act of designing. We have a wide variety of users from teachers and academics to product designers and architects.”

Augment will use the money to expand globally and invest in new talent.

“With Augment, L’Oréal’s sales people can go to a location, take a picture, and show what the display would look like in that place,” Chianetta said. “Then they can show the customer exactly what they want to get. It is all about visualizing at scale in the real world.” 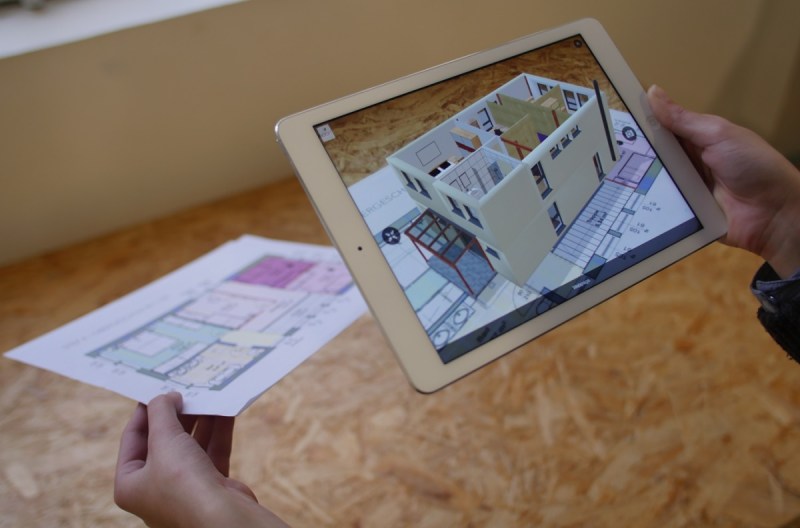 Above: Augment lets you simulate 3D models in the real world.

Meanwhile, an architect could zoom into a scale model and move around so they could see the point of view from a certain point in a landscape. You can also show an object with a marker or a tag on a card that you can put in front of a smartphone camera. The camera will recognize the tag and produce the 3D image associated with it. You can see what that object would look like in the real-world setting. Having a tool like this helps salespeople close a deal on the spot.

“We use a sensor in the tablet to guess where the ground is and place an object correctly,” Chianetta said. “We can remove any uncertainties around an object in the real world.”

The money came from Salesforce Ventures and other investors. Chianetta started the side project in Paris in 2010, and he formed the company in 2011. He added cofounders and went through an accelerator in Paris in 2012. The initial funding came as a $300,000 round in 2013, a subsequent $1 million round in 2014. Chianetta said the company has grown quickly over the past year, with revenue up 200 percent and a variety of new customers.

The app is available in the Salesforce AppExchange, and it is integrated into the Salesforce1 Mobile App. That enables Salesforce users to exploit it. Augment has 30 employees.

“I see Augment everywhere in the future,” Chianetta said.