Limitless wants virtual reality entertainment to be as moving and immersive as a Pixar movie. You should be able to create characters and virtual worlds who are as believable as Woody in the Toy Story movies. And so Limitless, founded by former Pixar and Bungie alumnus Tom Sanocki, is announcing today its Limitless Creative VR Environment that will enable artists to craft characters for virtual reality.

Sanocki wants VR to grow up quickly as a new kind of interactive and immersive entertainment medium. That way, it can get on with becoming the medium that everyone wants it to be, and become a $30 billion industry by 2020, as envisioned by tech advisor Digi-Capital. The platform from Limitless is a kind of foundation technology, allowing a VR user to hold a conversation with a virtual character, that makes a VR world into the kind of place that you would want to visit.

The Limitless platform can be used to create VR worlds in video games, films, and other interactive media that we don’t really have a name for yet. So far, the quality of characters isn’t very good, and the process for creating them can be cumbersome, said Sanocki, in an interview with GamesBeat. He illustrated how those characters can be made better through a demo created by his friend and customer, Mark Walsh, a former Pixar filmmaker who is now an independent VR film creator at Motional. Walsh created a short called Gary the Gull, which is included at the bottom of this story.

I looked at Gary the Gull while wearing a HTC Vive virtual reality headset. Gary, a seagull character, came up to me on the beach, and he clearly intended to steal food from my cooler. He asked me what my name was, and when I spoke and moved my head, he didn’t quite realize I was talking to him. So he said something like, “Don’t like to talk much?” Then he tried to get me to look in different directions. When he perceived with the motion-sensing indicators from the Vive that I had turned my head, he raced for the cooler and tried to steal something from it. 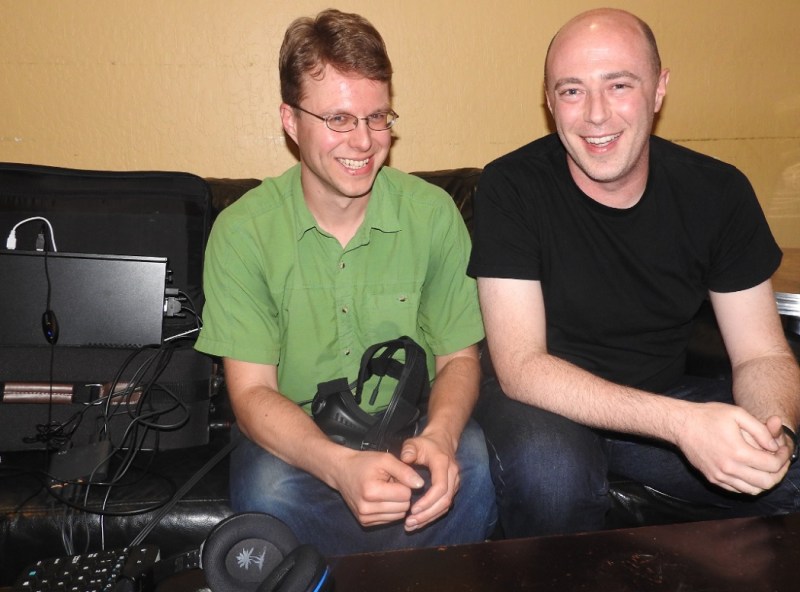 Above: Tom Sanocki (left) of Limitless and Mark Walsh of Motional.

“My career has always been about mixing art and technology,” said Sanocki. “We are going to build interactivity as the hook, and get people to stay by focusing on creating characters and the whole environment.”

“We want the developers and filmmakers to focus on their storytelling, not the technology,” Sanocki said.

The platform includes the Limitless Real-Life Code for VR characters, which provides a kind of real-life emotion engine for developers and storytellers. It allows characters to respond to voice, gestures, gaze, and other cause/effect rich input. It also includes Limitless VR character integration so that it works with underlying game engines such as Unity and Unreal. Limitless has applied for patents on its technology.

Walsh, who was also at Pixar for 18 years from A Bug’s Life onward, is now running his own VR film company called Motional.

“The currency at Pixar is emotion and characters,” Walsh said. “The biggest asset isn’t the film. It’s the character. People identify with Buzz Lightyear. It’s about emotional truth, funny situations. When I first saw VR, I saw a lot of passive content. I thought there was a space for interactive content, where I could talk to the characters. I talked to Tom. ”

Sanocki said, “We have this in science fiction all the time, with novels like Ready Player One, Diamond Age, and Snowcrash. That is the promise of VR. You have the illusion of being able to pick up a coffee cup now. People, and interacting with them, is the next step. It starts with entertainment and storytelling.”