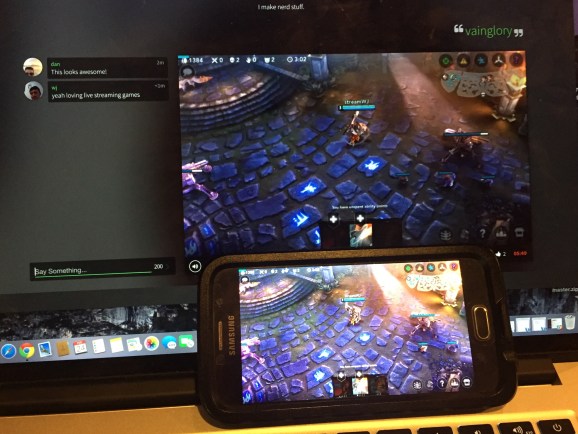 While Twitch and YouTube gobble up live and recorded video for traditional gaming platforms, a battle is heating up on smartphones.

Stre.am, a mobile livestreaming video company, is expanding from camera-based content to video games — at least on Android. It’s using the new additions to Google’s operating system to enable broadcasters to share their gameplay action live online. This puts the company in competition with upstarts like Kamcord and a surging Mobcrush, which has started gaining serious traction with Clash of Clans and Boom Beach fans. Mobile gaming is a $34.8 billion business, and it is growing faster around the world than PC or consoles. And as people get more serious about this hobby, they’re going to want more content. Kamcord has already seen some of its more popular streamers attract nearly 200,000 unique viewers in a matter of hours.

This comes as Periscope dominates the camera livestreaming mobile scene with tens of millions of accounts and an astonishing 40 years world of video watched every day. For comparison, Stre.am says it has had 100 years of video watched in the last 30 days. But Stre.am chief marketing officer Will Jamieson thinks his company can compete in gaming because it sees a path to success that mirrors Twitch and includes focusing on esports. The company is excited about releases like the mobile multiplayer arena battler Vainglory, and it wants to start building around that immediately. This includes potentially working with developers and event organizers on livestreamed events because Stre.am designed its technology to integrate at an enterprise level. This means that Stre.am is trying to make it easy for a business to come in and start broadcasting in a professional manner. As evidence of that, Jamieson points to the Jacksonville Jaguars organization of the National Football League using Stre.am to provide dozens of different camera angles all on one official site.

Now, Stre.am wants to bring that tech to mobile developers.

“We started really diving in and paying more close attention to games when, a couple months back, we saw a stat saying that League of Legends, the world championships had more viewers than the NBA finals and the World Series combined,” said Jamieson. “Esports was not only growing, but it’s at massive scale. It’s a huge popular sport. We wanted to find a way to get into that market through our live streaming platform, whether it be through live streams or around events.”

Right now, Stre.am doesn’t have anything official in place with Vainglory developer Super Evil Megacorp. The video company has only recently introduced its game broadcasting option, which works by having you broadcast your whole screen to your Stre.am followers. We tried it out, and it is simple to get started.

Sharing live gaming video from your Android smartphone or tablet is something we’ve seen from Kamcord for several months now, but Stre.am points out that it’s differentiating factor is the technology that powers its super low latency. The company claims it has a 1-to-2 second delay between you and what your viewers are seeing. This essentially eliminate the 20-to-30 second delay that you get on platforms like Twitch, YouTube Gaming, and Kamcord.

“From a gameplay perspective, latency is not a good experience,” said Jamieson. “It’s not realtime communication back and forth between the people watching the stream and the broadcaster. We think our low latency provides a much better user experience. It’s going to attract a lot of users to have more interactive experience with the broadcasters they’re following.”

This could provide a great solution for streamers who love interacting with fans, but Stre.am is emphasizing esports. Jamieson thinks mobile competitive gaming is only going to grow, and he thinks Super Evil Megacorp is going to push it forward.

“It’s backed by such a large amount of money,” he said. “The other big indicator for me is that Super built their own engine, as opposed to using Unreal or Unity. They did it 100 percent in-house to pioneer in the space and build on top of that. With mobile devices continuing to improve with big hardware upgrades and all of that, it’s indicative that the growth is going to continue. Vainglory has already been able to draw a large following in Esports as the first game adopted there.”

Up to this point, Kamcord, Mobcrush, and even YouTube Gaming has seen most of their traffic come from games like Supercell’s megapopular games. Vainglory is growing, but it’s a blip compared to Clash of Clans, Boom Beach, and Clasy Royale. Stre.am will try to attract those players as well, but it clearly has a strategy in mind that puts esports upfront.

“We’re trying to attack all the avenues,” said Jamieson. “We’re focused on Vainglory initially because it seems like they have the biggest following in esports.”