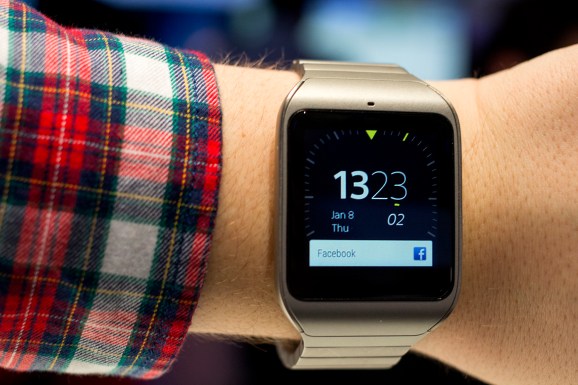 BARCELONA, Spain — Across the floors of the mobile industry’s annual mega trade show a year ago, it was difficult to walk the cavernous halls without someone shoving a smartwatch in your face.

In 2015, Mobile World Congress took place at a precipitous moment between the time Apple had announced its smartwatch the previous fall and late spring, when the gadget would actually go on sale. As such, everyone at MWC seemed to be simultaneously holding their breath and doing their best to pimp whatever wrist-bound technology they had for fear that Apple would soon stomp on them.

This year, however, it was a different vibe. There were almost no significant smartwatch announcements at MWC, and wandering the showroom floors, one had to turn over a few rocks in company exhibit booths to find wearable gadgets. Instead, everyone wanted to talk virtual reality and Internet of Things.

The curious absence of smartwatch talk was even more surprising because the show was held amid reports that wearables are doing quite well. And when it comes to mobile, this is an industry seemingly in need of every trick possible to find new revenue, with smartphone sales expected to hit a plateau this year.

So is the smartwatch revolution stillborn? Hardly, says Patrick Moorhead, principal analyst at Moor Insights & Strategy. Instead, it seems to have hit the pause button, as companies wait on several developments due later this year.

“There wasn’t a whole lot of discussion on wearables at the show,” he said. “No one should confuse that with a reduction in consumer interest, though.”

The numbers certainly back that up. As IDC recently reported, the worldwide wearable device market shipped 78.1 million units in 2015, up an astounding 171.6 percent over 2014.

“It shows that wearables are not just for the technophiles and early adopters; wearables can exist and are welcome in the mass market,” said Ramon Llamas, research manager for IDC’s Wearables team, in a statement. “And since wearables have yet to fully penetrate the mass market, there is still plenty of room for growth in multiple vectors: new vendors, form factors, applications, and use cases. This will help propel the market further.”

And certainly, there were some smartwatch announcements at MWC.

Garmin announced the Vivoactive HR smartwatch, which includes special sensors to measure heart rate. It costs $249.99 and will be available in regular and extra-large black bands. Haier announced a $220 smartwatch that funds a full Android operating system. Omate released the Wherecom K3, a smartwatch for kids that has 3G connectivity and a GPS tracker running on Android 5.1 Lollipop.

And, in a relatively odd match, Deutsche Telekom unveiled “dial,” a new smartwatch made with Will.i.am.

On the other hand, Samsung barely mentioned its smartwatches at its high-profile press conference the night before MWC. And HTC reportedly decided to push back release of its new smartwatch.

Kevin Walsh, director of trends and forecasting at GfK, said he believes part of the problem was that the smartwatch announcements made at MWC were a bit too incremental to warrant much media attention, even though companies are still pouring resources into the devices.

“Having been at MWC, my view is that smartwatch announcements have perhaps been drowned out of the news coverage by newer product groups,” Walsh said in an email. “There seemed to be a lot of updated watch products and many new manufacturers entering with a ‘me too’ device. The proliferation of devices was compounded by a large fashion driver element, meaning many brands had reasonably large portfolios even if the variants were mainly cosmetic in nature.”

According to GfK’s smartwatch tracker, the number of smartwatch options available to consumers continues to explode. In January 2013, GfK noted 23 different smartwatches. By the end of December 2015, that number had grown to 598 choices of styles, brands, and features. But, as Walsh notes, there is little to set most of these new entrants apart.

Within the IDC report, there are some hints as to why smartwatch fever may have cooled — at least temporarily — among mobile giants.

First, the Apple Watch does in fact seem to be eating everyone’s bacon. In just nine months, Apple (which famously does not attend big shows like MWC) has shipped more than 11 million Apple Watches, making it number three in overall wearables market share. In general, Apple has gobbled up the high-end market for the pricier smartwatches that might actually have decent profit margins.

Samsung is number five in wearables, having shipped 3.1 million units — only a modest increase from the 2.7 million it shipped in 2014 — despite the release last year of the well-regarded Gear S2 smartwatch.

The top two wearable slots belong to Fitbit and Xiaomi, who both focus on lower-cost fitness trackers. A good business for some, but with smartphone prices tumbling, many in the smartphone business probably aren’t looking for more commodity items to sell.

It appears that some companies are waiting with impatience for an update to Android Wear, Google’s companion watch OS for its Android ecosystem. There is widespread hope that Google will announce a major update at its I/O developer conference in May.

Apple is expected to announce some modest updates to its watch later this month, but a full redesign may not come until the fall, according to multiple reports.

New Apple Watches and an Android Wear update that offer new functionality could re-ignite excitement among manufacturers and app developers. More challenging, though, is that some observers believe that smartwatches, for the moment, may have simply bumped up against the limits of their components.

Boris Brault, CEO of Swiss smartwatch startup MyKronoz, said he expects that the next wave of major innovation in smartwatches will come in a couple of years, when a new generation of miniaturized chips, batteries, and sensors arrive.

“My feeling is that chipset manufacturers are putting so much emphasis on wearable energy and performance that this new technology is going to make the wearable even smaller and more acceptable to users,” he said. “Right now, I feel many people still hesitate to buy a smartwatch because of the power consumption.”

Walsh, of GfK, certainly remains bullish on smartwatches. His firm projects that over the next two years, smartwatches will grow from 31 percent to 52 percent of the wearable market.

In 2016, GfK expects to see 85 percent growth in smartwatch sales (from 2015, when 19 million smartwatches were sold). But the really big growth is projected in 2017 and 2018, when unit sales are projected at 75 million and 141 million units, respectively.

Those aren’t anywhere near sales of smartphones. But those kinds of numbers would still put the gadgets squarely in the mainstream of usage and — just as importantly for mobile companies — make them a major piece of business for years to come.