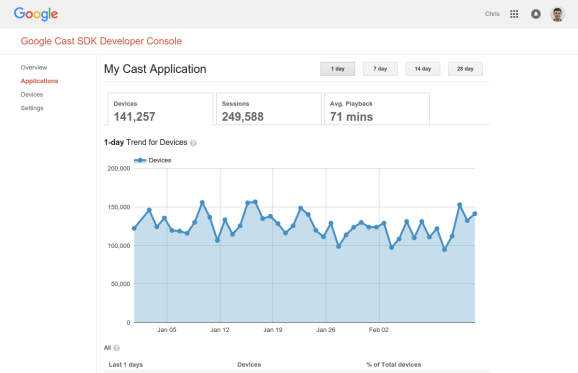 Google today announced a significant enhancement to the developer tools for its Google Cast software, which lets people stream media from their PCs and mobile devices to TVs and speakers. The Google Cast software development kit (SDK) Developer Console now includes dedicated pages for analytics for apps that work with Google Cast.

The tool is a bit reminiscent of Google Analytics, which lets people see check website performance and usage. Developers can access it by clicking the View link under the Statistics column for a given app.

Today’s update could be a big step forward to those developers who have supported Google Cast from the beginning despite the lack of first-party tools for measuring usage of it. Cast first showed up in 2013, with an SDK geared toward integrations on iOS, Android, and Chrome.

Google Cast works with the Chromecast, which Google updated last year, as well as Android TV and Cast-enabled speakers. Google has enriched Cast for developers with new application programming interfaces (APIs) and a plugin for the Unity game engine.

Yahoo’s Flurry analytics tool added support for Apple TV last month, and in January Twitter’s Answers analytics tool got Apple TV support. Now companies like Spotify have a good way to see how their apps are doing on Cast devices like Chromecast.