I have put dozens of hours into playing a single game of XCOM 2, the turn-based tactical strategy game from Take-Two Interactive’s 2K Games label. I have tried to turn back the alien conquest of Earth in a last-ditch guerrilla war by humanity. And now I am surrendering. The game is too hard, and I’m in so deep that I can’t make more progress unless I start over.

I’m going to get a lot of flak for this from hardcore gamers who want their games to be difficult. But I started playing this game on the “normal” setting and had to ratchet it down to “rookie” in order to continue with the game. This raises a question about the wisdom behind the game industry’s spiraling quest to make games more engaging by making them harder to play for a smaller group of hardcore gamers. If a game is too hard, a lot of more casual gamers like me are just going to give up. I’m here to testify that it is possible to make a game too difficult.

We’re seeing a new obsession with “permadeath” and high difficulty in games such as Dark Souls, Bloodborne, and Necropolis. Those games can make you feel like you’ve climbed a mountain when you beat them, but they have a pretty big downside. The completionist in me wants to keep going, but I’m giving voice to my shame. I’ve tried to beat some of the harder missions against the alien facilities in the title more than a dozen times. And I’ve been playing for the better part of a month. I’m not sure I like this trend all of the time. I loved it in Total War: Attila, which was really difficult. But I always felt I was making progress. In XCOM 2, I hit a wall.

Certainly, this made me feel inadequate. After all, the critics gave this game an 88 out of 100 on Metacritic, the review aggregator. But it’s noteworthy that players only rated the game at 6.9 out of 10. That’s about where I would rate it, given my troubles. If I didn’t run into the difficulty wall, I would have rated it much higher myself. Overall, it worked mostly fine on the Lenovo Ideapad Y700 entertainment laptop that I played it on.

I actually brought this up in an interview with Sid Meier, the founder of Firaxis and the legendary game designer of the original XCOM and the Civilization titles. He wasn’t much help. 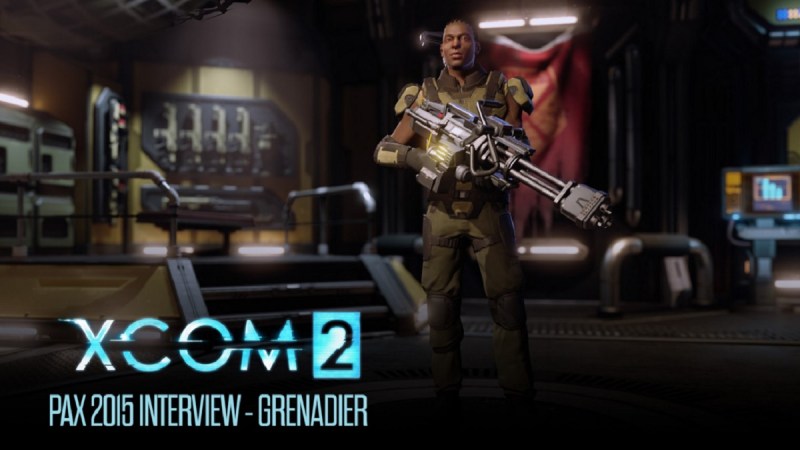 Above: I wish every soldier I had was a grenadier.

“Yeah, it’s definitely challenging,” he said. “That was one of the things that got a lot of discussion during development. The first level is very achievable. It gets tough after that.”

In XCOM 2, a sequel to XCOM: Enemy Unknown, you are part of a special forces unit dubbed XCOM. The aliens have conquered Earth, and some humans working for the Advent Coalition are collaborating with the aliens in a quest to wipe out all opposition. You are now part of a resistance force and must rebuild the XCOM organization. You play a high level strategy game on a global level, and then it moves into a purely tactical, turn-based battle when you execute the missions. These missions are the part that gets really hard late in the game.

As the commander, you have to build up your base ship, the Avenger, and acquire resources. You have to acquire new recruits for science, engineering, and soldiering. On the engineering side, it takes a long time to get the Avenger in good condition because you’ve retaken this mobile base from the aliens and have to clear out the debris. Then you have to spend resources on securing communications with other regions and powering up the areas that you have cleared. Then you can start getting some real work done.

On the scientific research side, you have to stay busy doing autopsies on aliens and decrypting their communications. Then you find out they are building some kind of Avatar project that is going to be a disaster for humanity. You have to expose that project and renew humanity’s will to fight. Meanwhile, you have to set the scientists loose on designing better weapons. All of this takes time, and you are in a race to stop the aliens from completing the Avatar project. In other words, the game designers have figured out ways to completely slow down your progress in building up your strengths.

The combat itself is also difficult. It seems simple enough, as you land a team of four soldiers at the mission location. You move one square at a time until you run out of movement points. You can either move halfway so you can have weapons ready, or you can move as far you can without weapons ready. The soldiers start in a concealed area at first, but they have to blindly go out to find the location of the objective. If they move too fast, they can be ambushed at any time. If you move too slowly and try to ambush the enemy, you may find that you run out of time on completing the mission.

When you run into the enemy, you have to try to concentrate your firepower. But the enemies are quite strong. The Sectoid leaders can manipulate minds and make your soldiers panic and run away. The squad leaders can target you and make it easier for others to hit you with shots. If you go in with rookie soldiers, they may panic more easily, or they may miss easy shots. And if you miss some shots, the enemy can close on you and just take you out at close range.

The initial mission is pretty easy, but as soon as you move into the second mission, it gets hard. One of the horrible design decisions (at least from the mere mortal’s point of view) is that you can’t really catch the enemy in an ambush. Your first soldier can toss a grenade at three aliens. But the grenade doesn’t kill them. Once they are alerted, they scatter. Your second soldier (even if he or she is on Overwatch, where they fire at anything that moves) cannot throw another grenade and catch all three at once. Later on, one of your grenades can become powerful enough to take the weaker enemies out all at once, but the more difficult, stronger enemies you encounter later will survive. You can get multiple shots at enemies through Overwatch during an ambush, but that’s not nearly as good as multiple grenades. 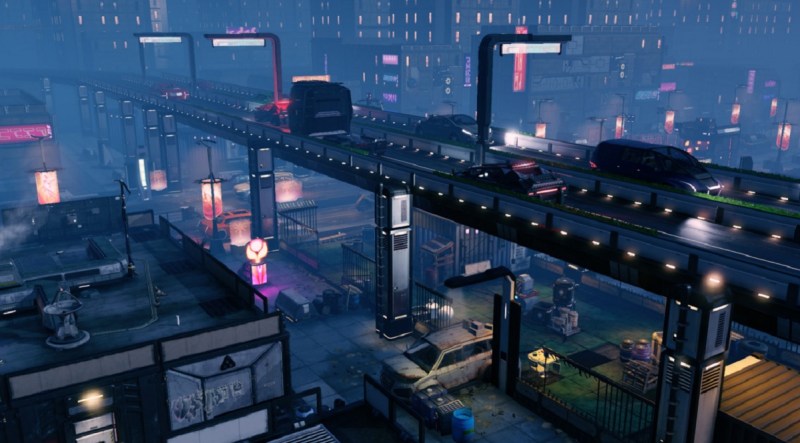 Above: The slum map in XCOM 2 had a lot of vertical challenges.

You have many ways to improve your soldiers’ survivability. You can customize your soldiers with upgraded weapons. You can give them accessories that help them resist alien mind control. You can run scientific experimments that give you more powerful guns and grenades. But you’re always running behind.

The deck is stacked in favor of the aliens. They have badass aliens, whereas you have grenade launchers or rocket launchers that cannot take the aliens out with a single shot most of the time. They outnumber you. You have to get through them to reach objectives on a timetable. And they get reinforcements.

One of the problems is that you can dig yourself a hole if you can’t execute a perfect mission every time. In XCOM 2, the aliens get tougher and you have to beat them with better weapons, more resources, and veteran soldiers. But your veterans can die in the missions. And once they are gone, you are stuck with wimpy rookies. When this happened to me, I had to bring the game’s difficulty level down from “normal” to “rookie.” That was like a humiliating retreat.

That was fine until I started going into missions where the enemies were protecting the Avatar project. They had these gigantic robots projecting the enemy base, as well as a bunch of other aliens. My four soldiers would have to go up against nine enemies, many who were better than my soldiers. I managed to blow up one base by sending in four rookies who sneaked their way to the objective. Then I airlifted three of them out. 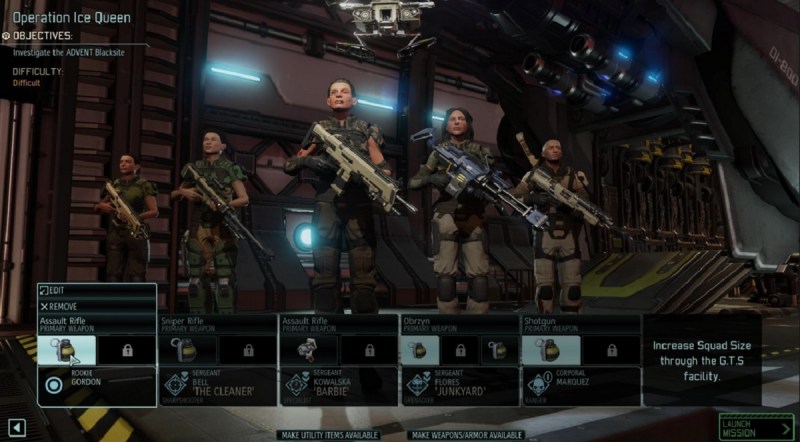 Above: You have to pick the right team in XCOM 2.

But the next base was even harder, with a bridge over a canyon guarded by heavily armed aliens. I could find no way to get through that even when I sent in four leveled-up veterans. After fighting that battle a bunch of times, I concluded it was unwinnable. And so I’m hanging up. I could start over and play every battle perfect or restart it. But the game makes restarting hard. It doesn’t automatically save at the point where you made a bad decision. You have to save the game manually if you want to head off trouble. And when you revisit some of the maps, they will regenerate in a way that they are not the same anymore.

The aliens will be in different places on the map, and you have to learn how to fight them all over again. That makes the missions replayable but also very hard to complete without any losses. In other words, it would just take too long to replay the game in a perfect way to preserve your veterans for the important fights late in the game. I’m sure I could figure out how to cheat and read a bunch of tips, but I feel like the game is just too unforgiving. I’ve seen a lot of other complaints about it, and Meier’s own comments really hit home.

The XCOM 2 lead designer, Jake Solomon, at Firaxis acknowledged that the team feared the game was too easy, so they made it more difficult late in the development cycle. The problem is that they got that feedback from members of the team, who were all expert XCOM players.

I don’t think they rebalanced the game properly when they did that. Laughably, a bug helped me out. In two missions the aliens did absolutely nothing. I was able to kill them and hit the objectives without any alien interference. It was as if the A.I. went to sleep. But that only earned me a temporary respite.

It’s too bad because, for all of my complaining, it really is a fun, cinematic game with a lot of strategic thinking required. Steam says I have put 78 hours into the game, but I figure it’s about half of that since I left it running idle a lot. And I’ve only unlocked about 40 percent of the game’s achievements so far. Sadly, I’ve spent enough time trying to survive my first playthrough, and I’ll have to leave this game in my pile of shame.

I played the game on Steam on Windows 10. Take-Two Interactive Software’s 2K Games label provided me with a copy of the game. 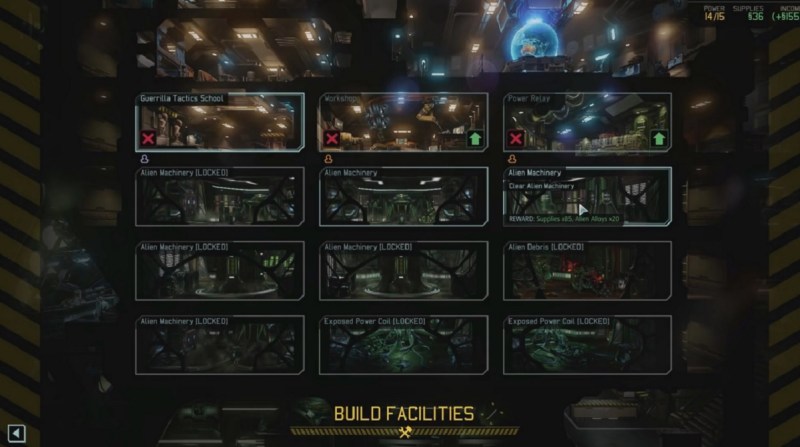 Above: I spent a lot of time building out the Avenger mobile base in XCOM 2.