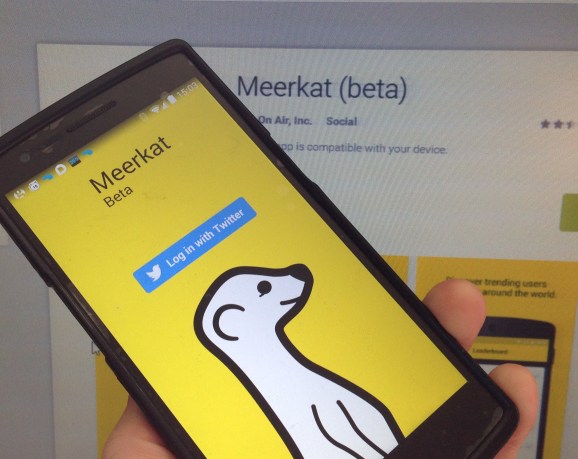 Meerkat, the app that generated much of the attention last year around live streaming video from a mobile device, is announcing today that it’s officially changing course and is building a new product toward that end.

The news has been a long time coming. Meerkat definitely had a base of some consistent users, and brands had even experimented with it. But as Periscope picked up usage after it was acquired by Twitter, many had wondered what was up with Meerkat. Then Facebook started pushing hard with its own live streaming tool.

It turns out that competition from the two popular social networks did play a part in Meerkat’s decision to go in a different direction, or pivot, in Silicon Valley parlance.

“The distribution advantages of Twitter/Periscope and Facebook Live drew more early users to them away from us and we were not able to grow as quickly alongside as we had planned,” Meerkat cofounder and CEO Ben Rubin wrote in a memo he sent to the startup’s investors a couple of weeks ago. Today Meerkat published the memo on Medium, following the publication of an Re/code article on the news.

But the problem may not be as simple as Twitter and Facebook “going live” in the way that Meerkat had. The medium of live streaming might actually be ahead of its time — it’s something that has only taken off with certain types of early adopters. Rubin explains in the memo:

So far, the value proposition of being live is just not clear to people who are not celebrities/media/news. If you are one of them (and particularly if you have an existing audience on Facebook or Twitter), there is clear value in occasionally going live as a new way to bring content to your audience or interact with them. This is especially true around existing live events with behind the scenes content, etc. But for most regular people – it has been hard to figure out when or even why to go live. It’s different than sharing photographs – think of it this way: before Instagram, people already knew what constituted a beautiful photo and tried to take them. With live video no one really knows what “good” live video they can create is.

At least the startup isn’t short on funds. Greylock Partners and others invested $14 million in Meerkat a year ago.