At the recently concluded SaaStr Annual, every founder I met had the same question: “What is happening with SaaS valuations? Should I be worried?”

The answer to the first part of that question is covered in excellent detail here and here. Rather than rehash that shift, let’s try to answer the second part by looking at how software venture financing reacted to the 2009 downturn. Many of the conclusions are intuitive, but perhaps the numbers can shift the collective discussion from “Is the sky falling?” to “Here’s what we are dealing with.”

The software funding picture in 2009

In 2009, invested capital in software companies fell 34% year-over-year, from $6.1 billion to $4.0 billion. Interestingly, most of that contraction was driven by fewer deals getting done (-26% year-over-year) while average check sizes stayed relatively constant (-11%).

That shift brings us to Takeaway #1: There’s a “flight to quality” during market downturns — high quality companies are still able to raise but have to execute on (slightly) smaller dollars. 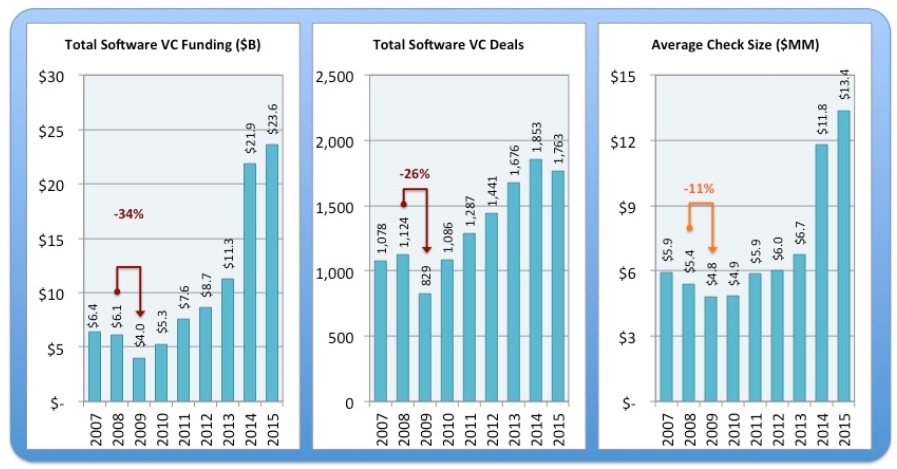 Optimists will notice another pattern in the image above — software funding bounced back relatively quickly from the 2009 downturn, exceeding pre-recession (i.e., 2008) levels within two years. The speed of recovery brings us to Takeaway #2: Capital markets can bounce back quickly, so even extending your runway by 2-3 quarters can make a big difference to your financing environment and funding terms.

The table below shows that the initial part of the recovery (2009-2012) was relatively controlled, with  investors growing steadily more aggressive on annual invested capital (+29% CAGR) and deals (+20% CAGR). However, average check sizes stayed relatively flat, in the $5-6 million range (+8% CAGR), which brings us to Takeaway #3: While overall funding levels can return quickly, investors value capital efficiency and manage capital exposure (dollars per company) well into a recovery.

The software funding picture by stage

So how will that funding surge pull back? And what does it mean for founders? Let’s look at the 2009 data by stage of funding. For early-stage companies, the 2009 downturn holds an incredibly important lesson. There was no noticeable change in invested capital, number of deals, or check size! 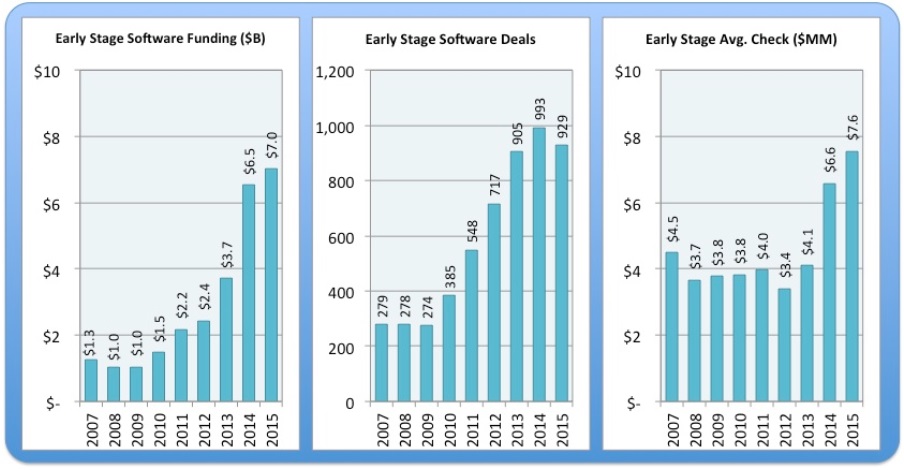 However, a new downturn is starting from a much higher baseline than 2007 funding levels. Early-stage rounds have seen a run-up in valuations over the last three years. This shows up in the ballooning average check sizes (2013-2015) above and the growth in median valuation below. Both trend lines will probably go back to pre-2013 levels.

Together, these two charts bring us to Takeaway #4: Early-stage (pre-Series B) founders should NOT be as concerned about overall capital availability, but they should temper their valuation expectations. 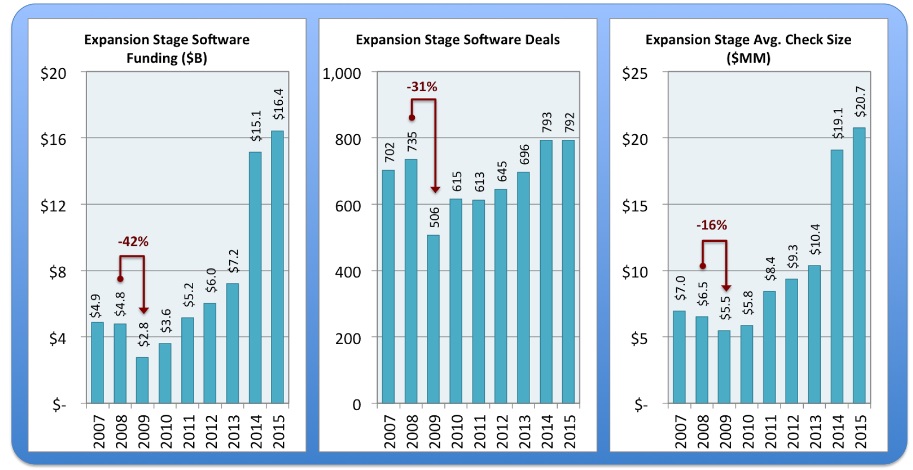 That degree of downturn in dollars deployed means that unlike early-stage companies, expansion-stage companies will face a fundamental problem around capital availability, not just lower valuations. Unfortunately, the run-up in late-stage valuations (below) is likely to compound that problem.

These two charts bring us to Takeaway #5: Later-stage (post-Series B) founders should be concerned about capital availability and focus on Takeaway #2 (finding 2-3 quarters of added runway) to avoid fundraising in the near term.

Unsurprisingly, all the lessons from the last downturn tie back to doing more with less capital and extending your cash runway. That may seem impossible in the short term, but there are some great ideas around navigating the shift here and here. Remember that as recently as 2013, great teams were delivering record results on far less capital. And we will be helped by things like office space and hiring getting cheaper as me-too competitors fall away. As an ecosystem, we can rediscover those lean growth muscles.

Indy Guha is a partner at Bain Capital Ventures (BCV). He joined BCV in 2007 and invests in application software and SaaS companies, with a focus on sales and marketing technologies. He also leads the BCV bespoke demo day series for Fortune 5000 CMOs. He currently sits on the boards of InfusionSoft, 6Sense, Wrike, and Kenshoo. Previously, he was a Product & Engagement Manager at BloomReach, working on key go-to-market issues such as performance attribution and pricing. He was also the interim Head of Marketing at Captora, helping launch the company from stealth mode and managing two product releases.