One of my favorite apps on the HTC Vive Pre virtual reality headset is Google’s Tilt Brush, a 3D painting program that lets your turn the virtual world into your canvas.

This kind of VR experience could very well be one of the killer apps for virtual reality, which tech advisor Digi-Capital predicts will be a $30 billion market by 2020. It may not look like much in my hands, but real artists can truly create some eye-popping virtual paintings that are more like museum experiences. I expect that VR art is going to be one of the best uses for the medium, as people figure out what they want to do in the new worlds that we’re about to create.

VR is a new frontier, and we’re at the very beginning of it. Dozens of apps are coming, and some of them will truly make you feel like you are somewhere else. Tilt Brush is one of those applications that you can get lost in. I certainly wish I was better at drawing, but you don’t have to be an artist to enjoy it. 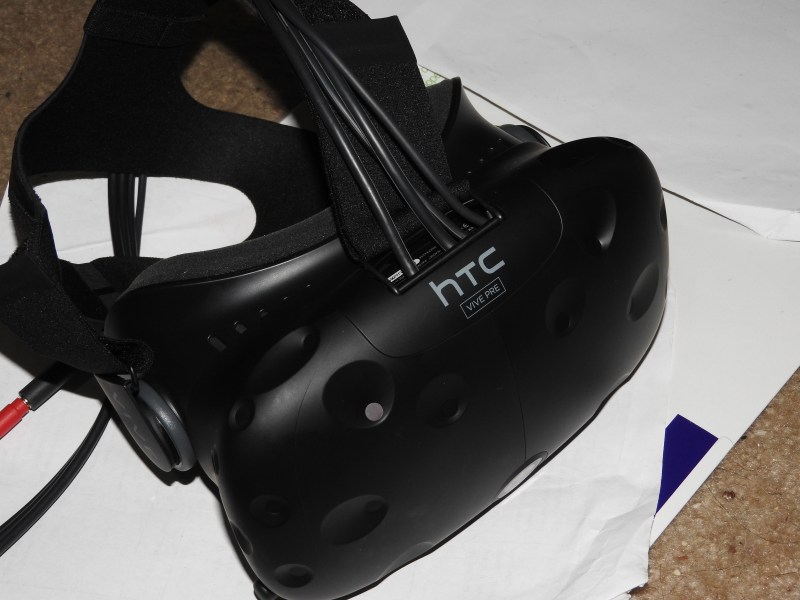 Above: The HTC Vive Pre will ship in the first week of April.

I unpacked my HTC Vive Pre headset this week and started testing a bunch of titles with it on a new gamer PC. These games aren’t yet final, but they’re available under Valve’s SteamVR demos on the Steam digital-distribution store. Valve created SteamVR as a platform, and HTC is building the Vive VR headset. The headset debuts in the first week of April for $799, not counting the cost of a PC. It’s not cheap, but when you’re standing on the edge of a new frontier and all that, you have got to pay up.

Above: Tilt Brush from Google.

The system included an Intel Core i5-4590 CPU running at 3.3 gigahertz, Windows 10 Pro, and eight gigabytes of main memory. It also had an Nvidia GeForce GTX 980 Ti graphics card with six gigabytes of video memory. That’s the recommended system that you need in order to run a PC-based VR headset like the Vive or its rival, the Oculus Rift. When you fire up SteamVR, some indicators tell you in green if the system’s components are all working properly. Then, you go into your Steam library to select VR titles to play.

I’ve seen more than a dozen demos so far on the Vive Pre, which is not the final hardware. But, I quickly returned to the Tilt Brush app to get reacquainted with the technology. And Tilt Brush was the ideal app to introduce my 12-year-old and 16-year-old kids to VR on the PC.

Google’s Tilt Brush, which I saw a year ago, has come a long way as a virtual painting experience, where you can be inside the 3D painting that you are creating. Google acquired Tilt Brush from prototyping firm Skillman & Hackett in San Francisco.

While Oculus VR created a sculpting app dubbed Medium, Tilt Brush is all about painting with your hands. You can use the hand controls to select different kinds of brushes. You can even paint with colorful bubbles or sparkling spots. It is a wondrous experience and something that you can do only inside an immersive, 360-degree virtual reality experience. I guarantee that if you show Tilt Brush off to young kids or grandparents, they will truly be wowed. And it will take them perhaps a minute or two to learn how to use the interface.

My youngest kid stayed inside the world and giggled as she was reaching up as high as she could to build something that was taller than herself. She moved around in the 3D space to view her creation from different perspectives. It’s cool to see how you can get very physical while drawing in VR. But, my kid had to sit down in a chair after a while because it was tiring. 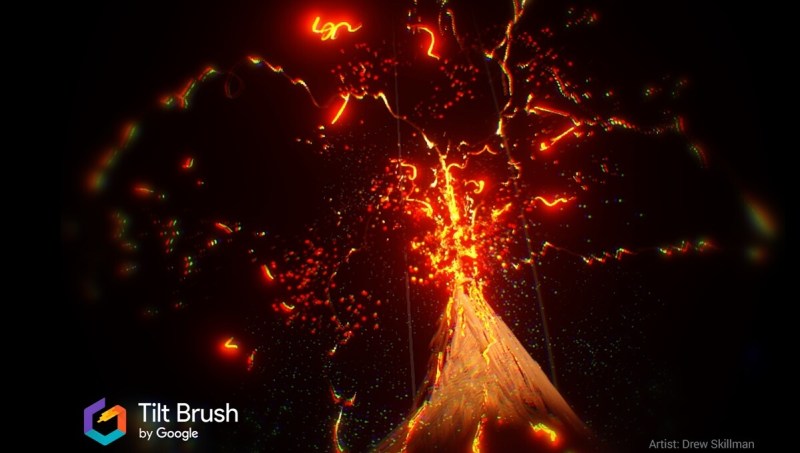 Above: More from Tilt Brush.

You can paint things that are life sized, meaning they are as tall in the virtual world as you can reach. You can turn around 360 degrees and paint all around you. You can use a marker, a broad brush, a fine pen — just about any kind of painting device. You can display the choices you have by pulling the trigger of the left-hand control. Then, you pick which one you want to choose by squeezing the trigger of the right-hand control. You point at the item you want to use in order to select it. At that moment, you can start moving your arm around as if you were really painting.

You can choose from a wide array of textures, such as smoke, stars, light, and sparkles. You can flip, rotate, and reposition a grid in space.

Nothing compares to walking around inside the art that you are making. You can also share your creations in the future by exporting them as GIFs. I’ve looked at some of the work that real artists have produced in the past year, and I’m astounded at what has already emerged before the launch. You can take those pieces and build upon them to make them your own.

Google isn’t nearly done with Tilt Brush. I know exactly where I want this to go. I want to be able to step inside existing virtual worlds and start creating within them — not only painting things but sculpting them like I can in sandbox mainstay Minecraft or Oculus VR’s Medium app for the aforementioned Rift. I don’t want to paint inside a dark world but one that seems like it has no boundaries.

Check out the video of my kid playing Tilt Brush below.