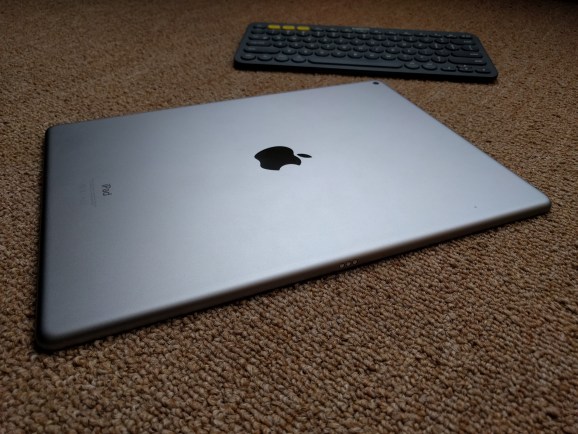 The back of the iPad Pro in the foreground. In the background is the Logitech K380 Bluetooth keyboard, which I've been using with the iPad Pro.

Google today updated its cloud-based document and spreadsheet apps, Google Docs and Google Sheets, on iOS, and there’s a notable addition for these updates — they’ve now officially been given iPad Pro support.

Specifically this means the keyboard in the apps now looks much more fleshed out than it did a few months ago, when the iPad Pro first came out. And indeed, I found the presentation of Docs and Sheets to be lacking in comparison with Microsoft’s Word and Excel on the iPad Pro.

But one thing that works nicely with Excel and Word on the iPad Pro is still completely missing from Docs and Sheets: the Split View feature that lets you use two apps at once, side by side. For example, you can use Word on the left side of the screen and Excel on the other. You still can’t do that with Docs or Sheets, as Jason Snell over at Six Colors points out.

It’s not extremely surprising to see Google hold off on supporting every single feature of Apple’s entry into the big tablet market. After all, last year Google did come out with its own answer to Microsoft’s Surface in the form of the Pixel C. Meanwhile on iOS 9, many of Google’s core apps, including Docs, Hangouts, and Maps, don’t use the 3D Touch feature of the operating system. Of course, Google has Android to look after and constantly optimize for.

But hey, Google Docs on iOS does now offer you a word count for the document you’re working on. So there’s that.