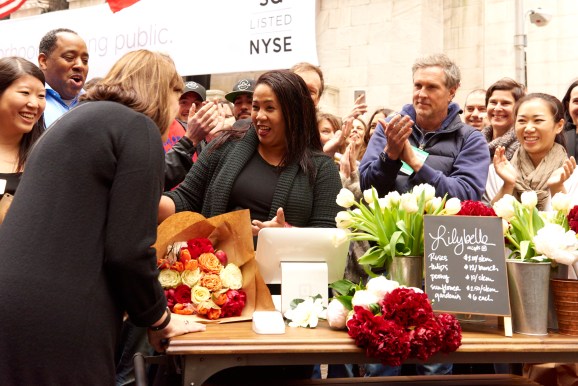 Square ($SQ) has released its earnings results for the first quarter as a public company, bringing in $374 million in total net revenue, up 49 percent annually, and a gross payment volume of $10.2 billion, an increase of 47 percent from the previous year. It had a net loss per share of $0.34. Furthermore, revenue from its software and data products was $22 million, up 52 percent sequentially from Q3 2015.

Wall Street analysts had been expecting the company to generate $343.22 million in revenue and a loss per share of $0.13.

Gross payment volume is the total dollar amount of all the card payments that Square processes, excluding those payments done for Starbucks. Having done $10.2 billion in the quarter and $35.6 billion for all of 2015, this indicates that more merchants are using the service in their businesses. Square attributes this increase to “both ongoing growth in our existing seller base and new sellers added in 2015.” And it’s not just from small businesses either, as larger sellers — those that generate more than $125,000 in annualized GPV — grew 70 percent in Q4 and make up 39 percent of its GPV.

Square went public in November with its stock debuting at $11.20 per share after being priced at $9. At the time, it reported having losses of $77.5 million on revenue during the first half of last year. Its stock had largely fallen below its IPO price and going as far down as $8.37, but has been slowly rebounding. The company closed the day up 4.01 percent at $11.94. Soon after, its stock jumped more than 3 percent in after-hours trading.

This quarter, the company launched a reader that accepts Apple Pay and made it more accessible at Apple retail stores. Square said that it has received over 350,000 preorders for the new readers.

As the company nears the end of its relationship with Starbucks, it reported that the partnership generated $47.08 million in revenue this quarter and $142.3 million in 2015.

With its other products, Square says that through Square Capital, it extended more than $400 million to 70,000 businesses in 2015, with nearly $150 million advanced in Q4. Its Instant Deposit tool has helped 58,000 sellers complete nearly 600,000 deposits to date, and its on-demand food service Caviar has grown 4.5 times annually.

Analysts at Zacks Equity Research believed that the payment processing and tech company was “positioned well to cross sell its broad and growing set of ancillary offerings including financial services and marketing services. The company’s strength lies in the innovative means of generating revenues from its relation with more than 10 million merchants.”

Pacific Crest Securities’ Josh Beck told TheStreet.com that he thought that Square was on the right path, but there was a big caveat: “We are optimistic that Square can continue to add several hundred thousand customers per year and generate upside to our 2016 estimates. However, the bar is high — an 8% jump in EBITDA margins in 2017 may be difficult — and we are cautiously biased on meaningful upside given the success required in execution, lending and software.”

The next test of Square’s financial stability will come May 17 when its IPO stock lock-up expires and more shares begin to flood the market.