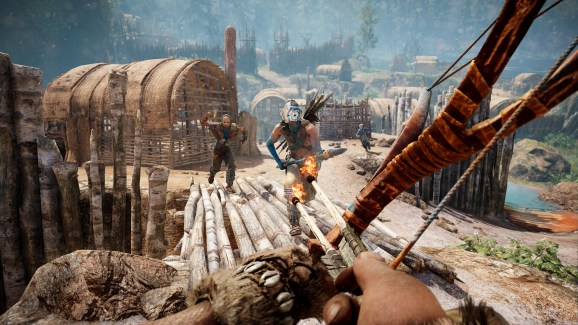 Far Cry: Primal did well, but it couldn't overcome February 2015 launches like ... Evolve.

February had a lot of blockbuster game releases, but that wasn’t enough to match spending from last year.

Consumers spent $842.5 million on new physical gaming products at United States retailers during the four-week period from January 31 through February 27, according to industry-tracking firm The NPD Group. That’s down 12 percent from $960.3 million year-over-year. That’s largely because of a tough comparison to February 2015 that included Nintendo debuting the New 3DS XL along with The Legend of Zelda: Majora’s Mask 3D. This year, February had no such hardware launch, and games like Street Fighter V couldn’t make up the difference.

Hardware sales were the biggest drag. They were down 23 percent year-over-year from $378.2 million to $292.2 million. Sony and Microsoft have both cut the price of their home consoles, and unlike last year, Nintendo didn’t have a 3DS launch.

“The main cause of the decrease was portable hardware, which dropped by 58 percent, or $48 million, due to a difficult comparison to the launch of Nintendo’s new 3DS in February 2015,” said Callahan. “Console hardware sales suffered due to the dramatic drop off of 23 percent as both [current- and last-generation] consoles experienced declines.”

“Despite the success of some February 2016 new launches relative to their predecessors, collectively, new launches sold 4 percent less in dollars and 12 percent fewer units than those of February 2015,” said Callahan.

While Far Cry and Street Fighter couldn’t handle Evolve and Majora’s Mask 3D, most of the decline came from Xbox 360 and PlayStation 3. Software sales for these obsolete consoles dropped 52 percent. Portable software was also down 30 percent.

The NPD report is only a small slice of a wider market. This data only takes into account new physical games sold at retailers in the United States. That means no Japan, no Europe, no mobile games, and nothing digital. NPD is providing only a small, helpful glimpse at a dynamic market that is difficult to pin down.

But with that out of the way, let’s get to the charts.

Far Cry, Fire Emblem, Naruto, and Street Fighter were the big new releases in February. Nintendo’s 3DS strategy game Fire Emblem: Fates made the chart despite having its sales split up between three different boxed versions at retail. Fire Emblem: Birthright, which Nintendo positioned as the best entry point to the series, came in at No. 9. But it likely also did well thanks to its Conquest version and the hard-to-find Collector’s Edition.

Naruto Shippuden: Ultimate Ninja Warrior showed that the anime franchise still has a huge fan base that wants more content involving their favorite orange fighter. Insanely, Naruto was the top-selling game on PlayStation 4 in February. And Street Fighter V did well despite not launching for Xbox One.

But February’s big winner is Ubisoft with the release of Far Cry: Primal. The open-world survival game did its part to help publisher Ubisoft finish fiscal 2016 with an influx of cash. That trend should continue into March with Tom Clancy’s The Division.

“Ubisoft’s Far Cry: Primal was the top game of February 2016 with greater sales than Far Cry 4 when adjusted for the number of days the games sold within their respective launch months,” said Callahan.

Before we get to the rest of the chart, let’s point out a few interesting tidbits and outliers.

Sony’s PlayStation 4 continues to dominate in terms of software sales. Sony Computer Entertainment America confirmed to GamesBeat that the PlayStation platform led in terms of games sales in February. We can see that in the parentheticals in the software chart where the PS4 is listed before Xbox One by games like Far Cry and GTA V. This indicates those games made more money on the Sony system. This makes sense considering the PS4’s larger owner base, but Call of Duty: Black Ops III selling best on Xbox One (the list doesn’t include bundled software) shows that games can still do just fine on Microsoft’s device.

Another interesting point is that sci-fi shooter Star Wars: Battlefront has dropped off the list. The game had legs through January following a lot of buzz for the Star Wars: The Force Awakens film, but that hasn’t lasted. It looks like publisher Electronic Arts still hasn’t found its Call of Duty.

One last point, a lot of the new games on the chart have stopped listing physical PC versions even though they are available for PC. Far Cry: Primal, Lego Marvel Avengers, and Street Fighter V didn’t sell any physical Windows discs at U.S. retailers, according to the NPD. Distributing PC games through brick-and-mortar outlets may soon be extinct.

Outside of all that, February was the return of some familiar blockbusters. We already mentioned Call of Duty, which debuted in November, but Grand Theft Auto V is still in the top three despite first launching all the way back in 2013. Of course, that’s nothing compared to Minecraft, which I first played in 2009.

As usual, Microsoft, Sony, and Nintendo are stingy with the numbers regarding their gaming systems. We’ve reached out to each company for a comment about their consoles performed, and we’ll update this post with any statements.

Sony was the first to respond. It confirmed that, once again, PlayStation 4 was the top selling console. This puts it ahead of Microsoft’s Xbox One and Nintendo’s Wii U and 3DS. No one shared any specific numbers.

“We would like to thank our fans and partners for making PlayStation 4 the top-selling hardware platform and the software sales leader in February, according to NPD. We continued to see strong year-over-year sales growth for PS4 hardware and software and are truly humbled by the support and enthusiasm from gamers.”

““The unmatched lineup of games available on Xbox One continues to generate a strong response from gamers as seen through global Xbox Live engagement and exclusive game sales. Compared to February 2015, exclusive Xbox One U.S. game sales drove a 49 percent increase and the total number of hours spent gaming on Xbox One worldwide rose 93 percent.”

Nintendo’s NPD statement did not include any information about hardware.