Probably anyone with a phone has had this happen to them. You send a quick text to a couple of friends to meet up for a movie, and before you know it, you’ve got multiple text threads going as conversations about what theater, what movie, what time, and what additional friends ought to come along spiral out of control. Enter Cola, a messaging OS that aims to put an end to this texting madness.

Cola has been in private beta since November 2015 and today launched an iPhone app in the App Store. The app uses “Bubbles” within a single text message to eliminate the problem of text-a-thons. The Cola app comes with six Bubbles pre-installed, but the company hopes to attract third-party developers to create more Bubbles for the platform. Cola is working with a small group of developers and aims to formally release an SDK later this spring. According to Cola, an Android version is also in the works, but the iOS app won’t exclude non-iPhone users. They follow a web link within the message to open the interactive Bubble. 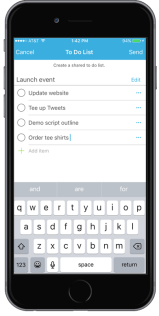 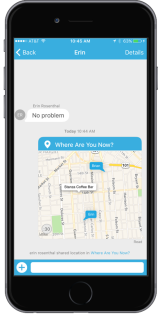 – Live location tracking: “Where are you now?”

– Take a photo or video: “Access your device camera”

– Photo library: “Add photos and videos to your chat”

“We recognize that texting is the center of our mobile life; it’s the core experience of having a smartphone,” said Cola CEO David Temkin, in a prepared statement. “In 20 years of text messaging, the biggest innovation the industry has seen is the ability to share an animated GIF. No one is focused on making texting more useful, and that’s our mission.”

For the more than two-thirds of American adults who now own smartphones, the device is becoming their primary connection to the Internet and the center of their communications. These increasingly involve pictures, links, videos and more recently, .GIFs. It’s a mode of communication that is overdue for disruption, whether by chatbots and Facebook Messenger, or from developers embracing Cola’s platform.

The San Francisco-based startup’s founding team includes veterans of Apple, Adobe, Microsoft, and PayPal, among others. The company announced a $1.3 million funding round in November 2015, led by Naval Ravikant, with participation from Tribeca Angels and Ravikant’s AngelList syndicate, which includes AOL founder Steve Case, Brad Garlinghouse, and other angel investors.

Aside from lending some overdue organizing principles to texting, the company has also produced a very amusing introductory video: