Virtuix, maker of the Omni virtual reality treadmill, said today it will move ahead with a “mini-IPO” under new regulations that allow companies to raise money in a different way. The move comes after potential investors pledged a non-binding $29 million in funds toward the investment.

The Austin, Texas-based Virtuix has begun shipping the Omni, a new product that allows you to run on a treadmill-like platform while wearing virtual reality goggles. It enhances the feeling of presence, or being immersed in a virtual world, because it allows you to make use of your legs and run. Virtuix hopes to raise $10 million while the market is hot, as VR is poised to become a $30 billion market (all sectors and all platforms) by 2020, according to tech adviser Digi-Capital.

“A lot of people from our own community have asked how they can buy shares,” said Jan Goetgeluk, founder and CEO of Virtuix, in an interview with GamesBeat. “In the past, we had to turn them away. Now we can say maybe you can and invest alongside Silicon Valley VCs.”

The system works with a variety of upcoming VR goggles such as the Oculus Rift. Now that Virtuix has begun shipping it, the company wants to raise more money on SeedInvest under the new mini-IPO rules of Regulation A. Institutional investors that have already indicated interest in participating in this Series A round include Scentan Ventures, Western Technology Investment, Tekton Ventures, and Scout Ventures.

Historically, investors had to be accredited by the Securities and Exchange Commission in order to invest in private companies. The approvals were based on income and net worth, enabling only the wealthiest 2 percent of Americans the opportunity to invest.

With the new regulation under Title IV of the JOBS Act, now the general public is allowed to invest in private tech startups. Virtuix will move ahead with its preferred stock offering for the general public on March 23 on the SeedInvest crowdfunding platform. The company is targeting $10 million in funding, with a maximum round of $15 million. More than 3,200 potential investors have already indicated they’re interested. 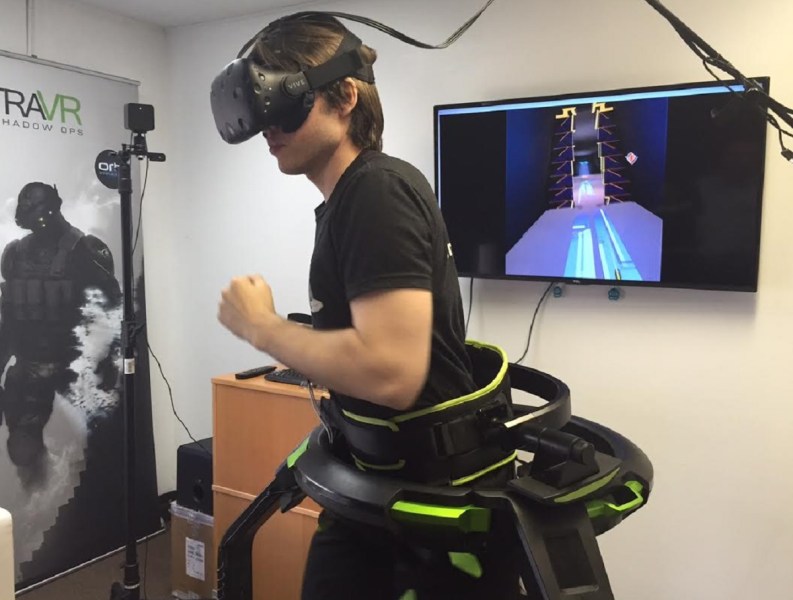 Above: The Omni treadmill makes you exercise in VR games.

Virtuix has 31 employees, and it has raised $9 million to date, primarily from private and institutional investors including Mark Cuban and Silicon Valley venture capitalists including Maveron and Tekton Ventures. Virtuix has sold more than 4,000 Omnis to date and started shipping in December 2015. It will take several months to ship that backlog, Goetgeluk said.

The Omni is pretty inexpensive to put into a mall as a kind of location-based entertainment, where operators can charge for a 10 minute experience.

“We’re getting inquiries from people everyday who want to put an Omni in a mall or an arcade,” Goetgeluk said.

Virtuix plans to use any new money it raises from its upcoming offering to fund growth and further product development. Ultimately, Virtuix’s vision is to have an Omni be part of every Active VR setup both for home use and for commercial applications that include out-of-home entertainment, training and simulation, and virtual tourism.

Since the start of 2010, 353 companies have raised nearly $3.9 billion in venture money, according to PitchBook.

Goetgeluk founded Virtuix in April 2013. The Omni is available for preorder for $700. The company is displaying the Omni at the 2016 International CES in Las Vegas this week.

“The Virtuix team has brought a great product to market and has delivered on its goals in the last two years,” says Brad Harrison, current investor and managing partner of Scout Ventures. “We are proud to be part of this financing round and support Jan and his team as they continue to build the next big entertainment platform and brand.”

Virtuix plans to use the proceeds from its upcoming offering to fund growth and further product development. Investors can make a reservation to participate in the offering. I recently gave the Omni a try at the company’s office in Menlo Park, Calif. I found it was easy to get used to, though I probably leaned on the rails a little too much. Still, it was a great shooting game experience, and I was winded by the time I finished playing the demo game. Check it out below.