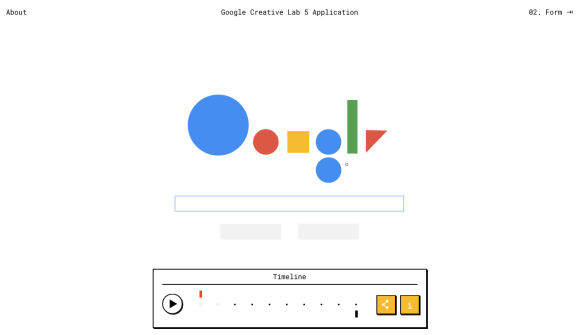 Google has come up with a novel way to weed out candidates for its Google Creative Lab, a yearlong internship-like program where people work on experimental technology, such as the recently launched Chrome Music Lab.

Rather than providing a conventional form that applicants fill out, Google is now asking them to do something fun: redesign one iteration of the Google homepage.

And rather than make a special site, the Google Creative Lab just stuck this very interactive job application right on its homepage, as It’s Nice That points out. (If you close the window, the site saves your work, so you can pick up where you’ve left off.)

This is certainly out of the box as far as job applications go, but it is something that you might expect from an experimental division of Google.

And this is not the first inventive scheme Google has designed for impressing talented people in the process of bringing them on board. Google has previously deployed a special program that looks out for people who search the Web for certain technical terms and then overtly interrupts search results with a call to participate in a “challenge” that has previously been described as a “secret interview process.”

Fortunately, the Google Creative Lab application is easier than the programming challenge, and anyone can try it — and play around with the search box, the “Google Search” button, and a spacey version of the Google logo. Try it out for yourself here. Good luck!