For the people who take pride in doing their own taxes, and on time, it’s getting easier to file your taxes straight from your mobile phone.

For some of us, the thought of doing taxes on a phone can be intimidating. But if the process is made easy, it’s doable. Tax-filing apps like TurboTax simplify the task by letting you snap a photo of your W2 and uploading it immediately into your tax return, along with other simple steps.

Initial stats from the uptake of the TurboTax’s mobile app suggest that an increasing number of people are using the mobile app to do their taxes.

TurboTax earned $560,000 in a single day on February 1 — even though the tax season is just starting to heat up — according to the latest stats from Sensor Tower, a company that provides mobile app store data. 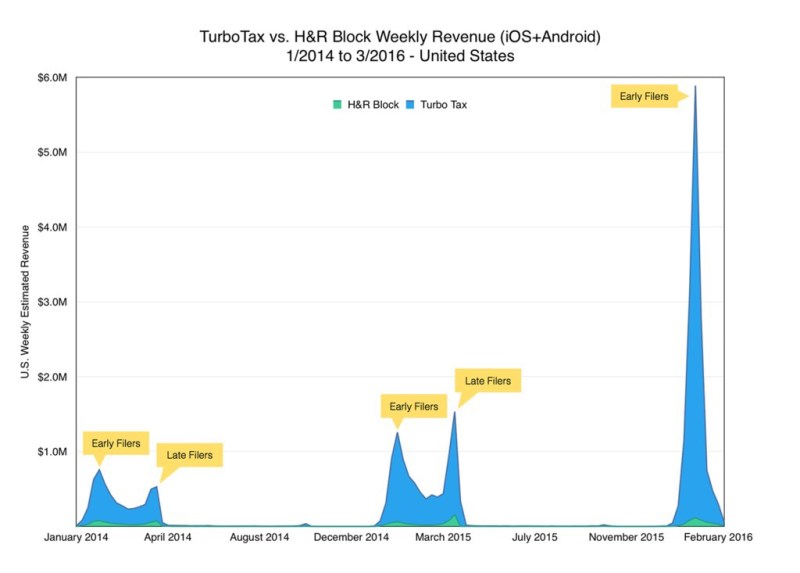 As you can see in the chart above, the revenue from the app has grown considerably since it was first released three years ago. And if the trend from last year continues, with revenues soaring in April, the revenue per day could potentially be in the millions of dollars by the time we hit the tax deadline of April 18.

In contrast, H&R Block, one of TurboTax’s chief competitors, is seeing negligible revenue right now, according to Sensor Tower’s data (see the green in the chart). When presented with the data, an H&R Block spokesman Gene King said the company does not report revenue data, and said only that “this information is not accurate.”

In terms of user satisfaction, TurboTax has a five-star rating on iOS, versus H&R Block’s 1.5 stars, and TurboTax’s app has a 4.3 rating on Android, compared to a 3.8 rating for H&R Block’s main app. TurboTax also has many more reviewers on both stores.

Intuit, the parent company of Turbo Tax, has made a concerted effort to orient its entire team to go mobile-first, and it is clearly starting to reap the dividends. The company says it has gained at least a million mobile users of its software each year.

The TurboTax app is free to download (as is H&R Block’s), so the revenues tracked by Sensor Tower are from payments made in-app. 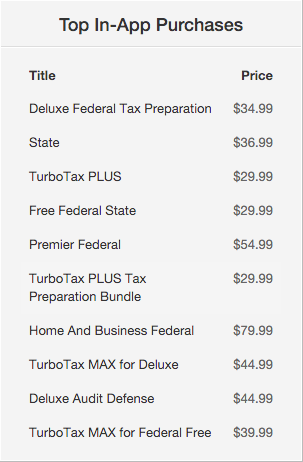 Also, the TurboTax app allows you to switch between desktop and mobile, so if you start on mobile but finish on the Web, the revenue paid to TurboTax isn’t counted in the app store revenue that’s tracked by Sensor Tower. In other words, the $560,000 daily revenue figure is just from users who completed their taxes end-to-end with their mobile devices. The table at left shows the top kinds of purchases made in the TurboTax app, according to Sensor Tower.

TurboTax’s traction on mobile is one of the reasons we’ve invited TurboTax SVP Nat Rajesh Natarajan —  who is also senior VP for product and engineering at Intuit — to our Mobile Summit on April 4-5 to talk about how how exactly his team pulled this off.