David Gaider is now part of the renaissance.

The acclaimed writer for the blockbuster Dragon Age role-playing game series left EA-owned studio BioWare in January. It didn’t take long for him to return to his roots — the Infinity Engine, a development tool that helped create some of the greatest RPGs in gaming’s history, which include Baldur’s Gate and Planescape: Torment. These fantasy titles became so renowned that they established a genre of their own: isometric RPGs (named after their pseudo-top/down viewpoint). In February Gaider joined Beamdog, the Canadian studio that put out enhanced versions of the Baldur’s Gate games he worked on years ago, as its creative director. 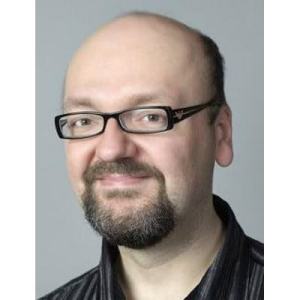 Above: David Gaider of Beamdog.

And he has done so as the style is enjoying, as Gaider termed it in an email interview, a “renaissance” that started when Obsidian Entertainment accomplished a successful Kickstarter campaign for Pillars of Eternity, an Infinity Engine-style fantasy RPG, in 2012. This led to other isometric games finding success on the crowdfunding platform. Beamdog joined in with enhanced editions of both Baldur’s Gate games and Icewind Dale, another beloved isometric RPG.

“I’m not sure I miss Dungeons & Dragons specifically insomuch as I miss the classic, isometric-style of party adventuring that the Infinity Engine games excelled at,” Gaider said on his enlistment with Beamdog, which is preparing to release the D&D-based Baldur’s Gate: Siege of Dragonspear (a new story that fits between the first two games in the renowned series). “I suppose, at heart, my RPG tastes are pretty old school, which is why I’m thankful it’s going through a bit of a renaissance these days.”

Gaider’s journey to Beamdog reads like a bit of kismet. It’s been more than a year since he left the Dragon Age team at BioWare, where in addition to writing for games he also authored three novels and a series of comic books based on the franchise. He’d spent more than a decade in this world, and he felt it was time to leave.

“I’ll always have a soft spot in my heart for fantasy, and for Dragon Age in particular, but there’s only so long you can work on one thing before you start to feel a bit of fatigue,” Gaider said. “That’s not really a reflection of the quality of the company [BioWare] or the projects I was working on, but more my personal desire to move onto something new, or even old, I suppose, since being away from something for a while can certainly make it feel brand new again.”

As GamesBeat reported when Gaider joined Beamdog, CEO Trent Oster said Gaider talked to him about a writing job the studio had advertised. Gaider said “a few things made it pretty easy, actually,” to join the Beamdog team.

“Trent Oster, cofounder of Beamdog, is someone I worked with at BioWare previously (on Neverwinter Nights: Hordes of the Underdark). I ran into him at my gym, and after chatting a bit, that’s what set me down the path of considering Beamdog as a place I could go,” Gaider said. “Beamdog is beyond the stage where it could be called a ‘startup’ now and is working on some pretty exciting stuff — which includes the games that I have some very fond memories of, such as the Baldur’s Gate series — and the position of creative director gives me more influence over what I’ll be working on, as well as more responsibility, which would be a much more frightening prospect for me if the overall team size wasn’t much smaller.”

“It certainly doesn’t hurt that the company’s also located in Edmonton, so I don’t have to uproot my entire life to work for them.”

Fantasy remains a constant in Gaider’s life. He’s been writing about might and magic since 1999. He plays tabletop role-playing games, which he said have “always been a source of inspiration for me.” And while he said he can’t discuss whatever he’s working on since joining Beamdog, it’s clear that he’s going to continue his passion: writing about fantasy worlds and designing worlds that live on for years.

“I cut my teeth on both Dungeons & Dragons and J.R.R. Tolkien’s Lord of the Rings series when I was a child, so I imagine there will always be a big part of me which leans toward fantasy as my go-to genre,” Gaider said. “Part of it is nostalgia, I suppose, but there’s also a part which has ideas regarding the parts of fantasy I like or don’t like or that I think I could do better.

“You carry around those ideas with you forever, and I think they’re a lot of what propelled me into becoming a writer and designer in the first place.”