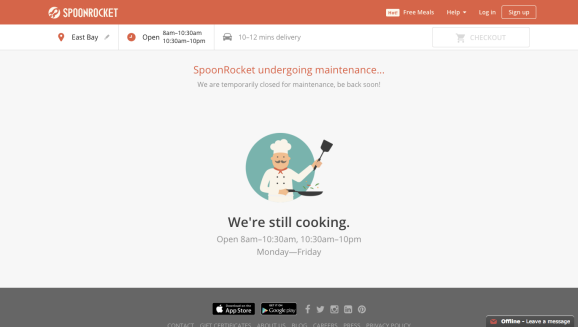 Update March 15, 9:08 a.m. PT: SpoonRocket now says it is, in fact, shutting down, despite suggesting that the site was “just resetting” in an interview with VentureBeat yesterday. We’ve updated the headline to reflect this. The original story follows.

The mobile-enabled food delivery service SpoonRocket might be facing competition from multiple companies, including Bento, Munchery, and Sprig, but it’s not shutting down. Today the Berkeleyside Nosh blog asserted that SpoonRocket was closing its doors, but that’s just not true, cofounder and chief technology officer Anson Tsui told VentureBeat in an interview.

“We’re just resetting,” Tsui said. The site is indeed undergoing some maintenance, as Nosh reported, but within a couple of days it should be completely back to normal, Tsui said. He said the company had not made any layoffs.

The report about the complete shutdown comes less than a year after Berkeley-based SpoonRocket temporarily suspended operations in the Seattle area a few months after expanding to the area (as reported by GeekWire). But things have changed since then, and SpoonRocket is now delivering food on the University of Washington campus and in downtown Seattle.

SpoonRocket has sought to distinguish itself by offering gourmet fare that’s fast and budget-friendly. Some recent meals include grass-fed beef stew and Salvadoran pupusas revueltas, according to the San Francisco Chronicle.

DoorDash, PostMates, Uber, and Yelp’s Eat24 all deliver meals as well, but they don’t have in-house cooks the way that SpoonRocket and its kind do.

SpoonRocket started in 2013. Investors include Alexis Ohanian, Foundation Capital, Garry Tan, and Y Combinator. In 2014, when the startup threw its first “dinner party,” its website temporarily collapsed under all the traffic.