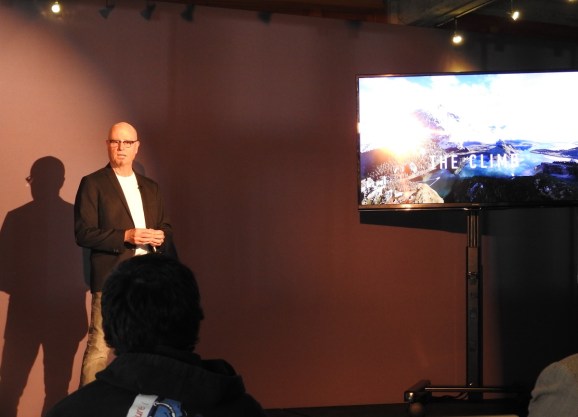 Crytek announced today that it is changing its business model for its game-development tools to “pay what you want.” It is also setting up a $1 million indie game development fund.

The new business model is a bold bet that relies on the kindness of fellow game developers, especially when Epic’s Unreal Engine and Unity’s tools have free options. The company made the announcement as part of its unveiling of its next-generation CryEngine V game engine, which supports for virtual reality headsets.

Frank Vitz, creative director at Frankfurt, Germany-based Crytek, said at a press event at the Game Developers Conference in San Francisco that the industry is changing and his company has to change with it.

As for the pricing, Vitz said, “You contribute what you can.” If a company can’t afford to pay, then it doesn’t have to do so, Vitz said. He just noted that if the company is successful later on, “you think of us.”

“This means a stunning degree of realism in real time,” Vitz said, in reference to the new engine, which developers can use to make high-end games with the most sophisticated graphics effects.

The new pricing model is a sign of the times, as other game engine providers provide their engines either for free or at no cost. The CryEngine competes with Epic’s Unreal Engine, Unity’s Unity V engine, MaxPlay’s new game engine, and even the CryEngine-based Lumberyard game engine from Amazon.

Crytek resisted low-end pricing for a long time, but the competitors now have more developers, and the move to “pay what you want” shows that the company is feeling some pressure from the likes of Amazon, which has made its game engine available for free.

Crytek licensed its CryEngine to Amazon, which used the technology to build its own freely available game engine, Lumberyard. Crytek reportedly received $50 million from Amazon, and it has used that money to finance more improvements and games.

Crytek acknowledged that other game engines have done a better job of making game development more accessible and intuitive. So Crytek has put an emphasis on accessible, intuitive tools with great user interfaces, the company said.