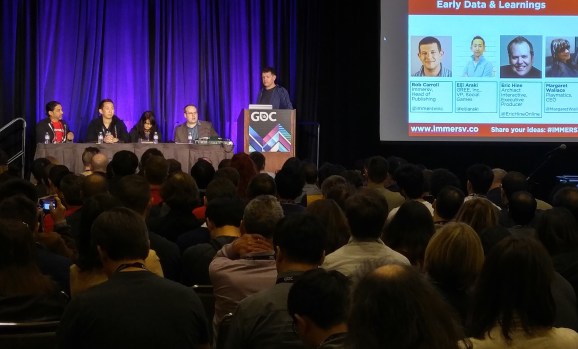 Game developers have an opportunity to set price expectations for virtual reality games, but as with mobile, the industry will probably decide the price for a new game download is … nothing.

Free-to-play gaming is coming to virtual reality, a panel of developers and VR experts said during a panel at the Game Developers Conference today in San Francisco. Right now, many studios expect consumers to have a lot of demand and money to spend on virtual experiences and games. This has led to products like AirMech — a free-to-play release for PC — coming out later this month for Oculus Rift at $40. But that trend of charging more for games on VR because they’re new and novel probably won’t last as studios experienced in the mobile market flood app stores for Samsung’s Gear VR, Google’s Cardboard, and more with games that are free to download.

Analysts at tech adviser Digi-Capital expect VR to generate around $30 billion in spending by 2020, and a business model that’s reminiscent of Clash of Clans or League of Legends could fuel the climb to that milestone.

“This is an early market,” Immersv chief executive Mihir Shah said during a panel at GDC. “But it already has millions of daily active gamers.”

Immersv launched a VR ad platform earlier this month that helps studios generate revenue by adding video trailers to free-to-play VR games. These ads are either 360-degree videos or played on a 2D screen in a simulated theater. Shah noted that more than 80 percent of the people watching these ads end up finishing them, which is nearly double the completion rate of video ads in mobile games. And each person is watching an average of four of these commercials.

This creates a market where developers could make 5-to-8 cents from each one of their daily active players (ARPDAU). With Google, Samsung, and more planning to implement in-app purchases in their VR platforms, that number is going to balloon quickly.