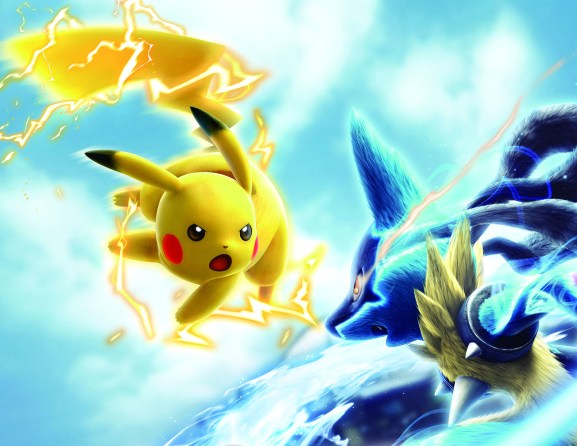 Pokkén Tournament -- a unique mix of Pokémon and Tekken.

If the idea of Pikachu dressed up in a luchador costume and fighting against other Pokémon on the deck of a ship where a giant Magikarp festival is taking place is your idea of a good time, Pokkén Tournament is going to fulfill your wildest fever dreams. Pokkén Tournament is the Pokémon game that finally realizes battles in an atmospheric way that matches, if not surpasses, how trainers have imagined battles for years.

Pokkén Tournament is an oddity, and the Pokémon and Tekken series are odd bedfellows. Originally released in Japanese arcades in 2015, Pokkén struggled to find a following, making it seem slim that it would ever see a Wii U home console release, let alone one in the States. But Pokkén Tournament, a collaboration between the Pokémon Company and developer Bandai Namco (Tekken), combines the two franchises into a fighting game in the style of Tekken, Street Fighter, or Marvel Vs. Capcom, shedding the turn-based roots of the Pokémon series. It’s a unique twist on the Pokémon formula that works … for the most part.

It isn’t fair to call Pokkén simply a Pokémon and Tekken crossover. Instead, it has a more complex (perhaps too much so) battle system than expected, especially given the Pokémon branding. But it suffers from a lack of gameplay variety and depth that even Pikachu in spandex can’t overshadow.

Chandelure is one of my favorite Pokémon, but it’s an odd choice for a fighting game. It’s a giant ghost chandelier and doesn’t even have legs. How could it even fight opponents or grab and throw them? It’s not even humanoid, like Machamp! Put it next to Ryu from Street Fighter or anybody from Tekken and its immediately out of place. But its inclusion captures what is probably one of the more important elements of Pokkén: It’s wild and crazy fun that doesn’t make sense, nor does it need to. It’s a game where Pokémon battle each other in outrageous ways that break almost every rule of the Pokémon universe, and that’s a good thing.

It’s almost Pokémon fan fiction. Or, at least, it proposes an answer to people looking to battle Pokémon in a way that isn’t turn based and one that is more about flourishes and combos than leveling and elemental balancing.

But that’s part of what makes Pokkén fun. Chandelure and many of the Pokémon wouldn’t fit in a regular fighting game. I would never have picked Suicune, Gardevoir, or Braixen, either. They’re bold — and out there — choices. You can play as 16 different Pokémon (the franchise’s full roster is 722), including two different versions of Pikachu and Mewtwo. Frankly, your love of the roster will probably have a lot to do with how much fun you have. If one of your favorite Pokémon is in it, like Chandelure for me, that’s a good start. 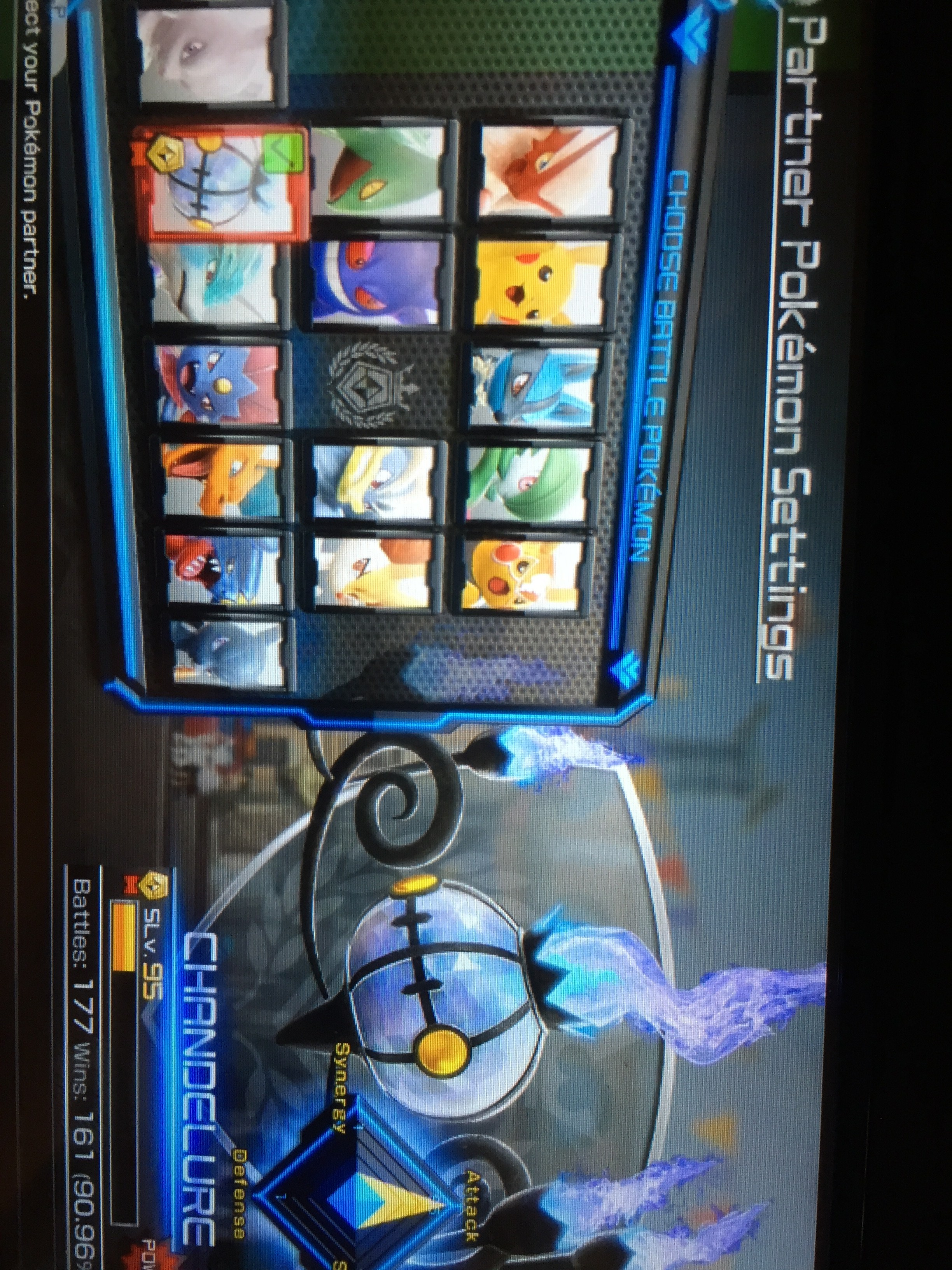 And what other game, aside from Pokkén, would get away with letting these Pokémon battle in such a manner? The concept is something that I’ve been intrigued by from the start, and I’m glad Pokkén exists and that we can play it in the U.S. Where else can you have Chandelure grab a Charizard and throw it against a wall before summoning an Yveltal and blasting that Charizard into the sky? Exactly.

Each Pokémon also has powerful Burst Attacks (think Final Smash moves from Smash Bros.), that have the strong and over-the-top flash and glamour that make certain fighting games more enjoyable to play and to watch.

This really is Pokémon like you’ve never seen it before. And that’s part of the charm.

As I played Pokkén Tournament, I kept writing down just how much fun I had. The game is full of explosive, high-octane Pokémon battles that call to mind both the Pokémon Stadium series and the anime — but taken to new extremes.

When the A.I. is properly matched to you (or you match up with someone well online), the battles are fun and intense. I think that Pokkén has a real chance to catch on in the professional fighting game scene and with the Twitch livestreaming crowd. It has real potential as a viewing experience.

Pokkén is fun. Plain and simple. And fun can carry a game a long way, even one with problems.

Pokkén is the best looking Pokémon game, period. That shouldn’t come as much surprise, given the Wii U, Nintendo’s only HD console, hasn’t had a proper Pokémon release. The battles here feature the best looking — and shiniest — models of Pokémon we’ve ever seen. A few jaggies are here and there, but still, Pokkén is the best-looking Pokémon game yet.

Above: Pokkén Tournament is fun, but not without its problems.

Pokkén is over the top and flashy — not quite to the point of a fighter like Tatsunoko vs. Capcom: Ultimate All-Stars but over and above Smash Bros. It’s probably the most badass entry in the Pokémon series (well, if that’s possible for a game that stars Pikachu).

Unlike other fighters released this year, Pokkén offers quite a bit out of the gate. You’ll find a story mode (more about that later), local battles (with one person on the TV and one on the GamePad, which is a cool option, though weird it’s the only way offered to play local battles), CPU training, tutorial lessons, and online battles (which worked pretty well before the official launch, with a few initial hiccups at the start of some battles and only one instance of bad lag).

I started (and recommend starting with) the practice area, which includes a tutorial, free training, and action and combo dojos to help you get the feel for things.

My battles online were more enjoyable (well, except those that I lost) than playing the story mode, mostly because playing against a real person is going to be a better matchup than fighting the A.I. more often than not. And people who just focus on multiplayer might not have as many qualms with the rest.

If you thought grinding to level up Pokémon was repetitive in the mainline games … well, Pokkén’s story mode may feel all too familiar, but in all the wrong ways.

It does have some meat with a roughly 12-hour story mode. The problem is how that content is framed. In order to progress through the various leagues, you start at a low rank and battle your way up in chunks of five trainers at a time. Once you are ranked in the top eight, you can enter a finals tournament and challenge the league champion. If you lose one of these battles, you won’t rank up as high. This endless string of cookie-cutter trainers just isn’t a fun progression system. Unlike with other fighters, fatigue started setting in, and Pokkén Tournament just isn’t one of those titles I can sit and play for hours at a time. 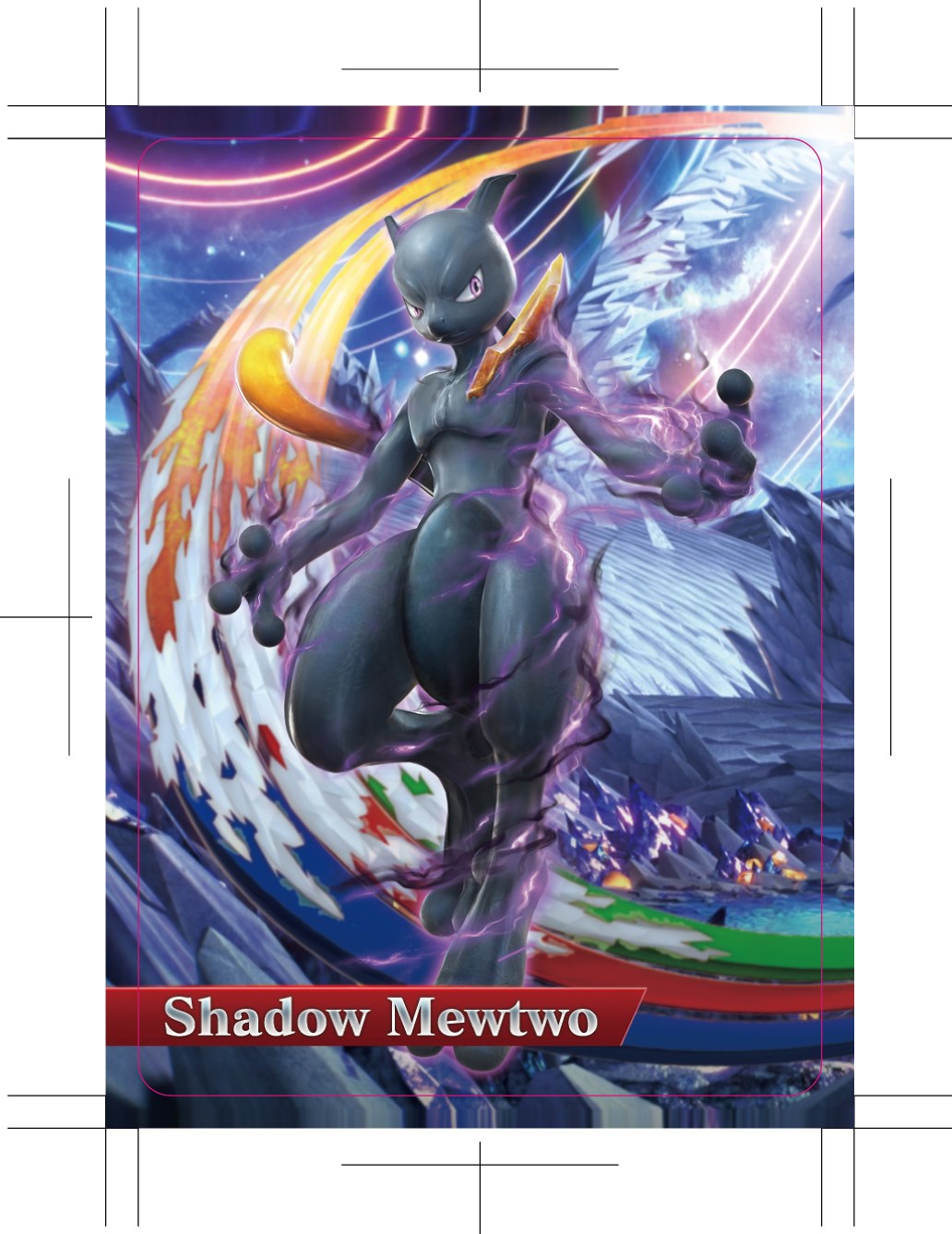 Above: First-run editions of Pokkén Tournament all come with a Shadow Mewtwo Amiibo card.

This all becomes even worse with the small Pokémon roster here. Pokkén Tournament just needs more monsters, and given how many Pokémon there are to choose from, this shouldn’t be a problem. I’m surprised, too, that only two unlockable characters are available outside of the initial roster. And how are no-brainers like Hitmonchan and Hitmonlee not here? Sigh.

Even so, each Pokémon doesn’t have the same level of personality that most characters in fighting games possess. The trainers behind them are even worse (read: personalities of wet mops), and once you’ve fought multiples of the same Pokémon within one session, things start to blend together. You are fighting generic versions of each Pokémon, too, not specific Machamps with different traits, further adding to the sense of repetition.

Being locked into using a certain Pokémon throughout all the battles doesn’t help, either. You actually have to leave the league and go to a whole other set of menus to link up with another Pokémon, meaning the game pushes you more toward sticking with one throughout the story. It’s a system that isn’t conducive for experimentation, which is sad because changing up the Pokémon you are using would have broken the monotony up a bit.

A shadow of a story

The story — which is lackluster, even by Pokémon standards — sits in the background, appearing once in a while to remind you that Shadow Mewtwo is causing some type of trouble, threatening the way that Pokémon and humans connect and blah, blah, blah … yeah. Pokkén has flimsy (and unnecessary) trappings of a story to try to justify and ground the idea of Pokémon fighting. Story is a good thing, but needless justification for the premise is not.

Pokkén Tournament also uses a weird approach to its battle system. Each fight has two different phases: a 2D “duel” phase, which is exactly how you are used to playing fighting games with only two planes of movement.

The other phase is a 3D “field” free-roaming phase, where the Pokémon have full 3D range of motion. It’s an overly complex way to try to spruce up the fighting genre, which results in even more combos to learn and memorize since some will only work in one phase or another. I also had several instances of combo-entry problems but don’t know if it was due to the different phases’ movesets or not. Certain moves also “shift” the phases — something that will happen several times in a battle — but Pokkén never tells you which maneuvers do this. You have to discover them on your own.

The way the battle and health system works, too, is one mistake and you could be stuck in a string of attacks ending in death, even if you are starting from full health. The various leagues also suffer from frustrating and random difficulty spikes — even within a set of trainers — with the early leagues being too easy and not challenging enough to prepare a player for later encounters. It takes some time to get to battles of adequate difficulty, as well as taking time to feel actually proficient at battling (if I ever got there). Being this unforgiving can be a problem, and lead more to me developing cheap battle tactics just to survive than feeling like I was actually mastering the battle system. A gradual progression of battles, instead of a sudden and sharp switch from too easy fights to too hard ones, would have helped a lot in this.

The difficulty and the progression system make for an especially brutal experience during the last league, where you have to rank up through a lot of trainers. If you lose one fight in a string of five battles, you won’t climb as high … meaning you need to keep trying the leagues over and over and over again. It’s just not a fun progression system.

Pokkén Tournament isn’t quite as successful as some of the other Pokémon releases and other genre experiments (Pokémon Conquest comes to mind), but it offers high-energy battles and a unique framework for fights, even if it could use some tweaking. It’s fun, and it has a battle ecosystem with real potential. Also, I do think its multiplayer could have legs in the esports scene.

But a few changes to Pokkén’s mechanics and structure could make a potential future entry something even more solid and special.

Pokkén Tournament releases on March 18 for the Wii U. The publisher provided GamesBeat with a digital code of the game for the purpose of this review.