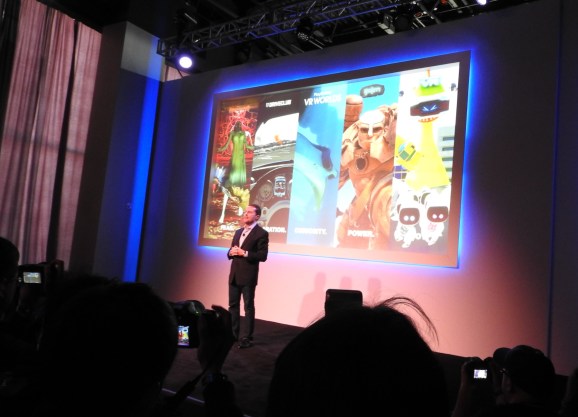 It’s going to be a big year for virtual reality, and the crowds at the VR sessions at the Game Developers Conference reflect that. VR is expected to be a $30 billion market by 2020, according to tech adviser Digi-Capital. The PS4 has sold 36 million systems since its November debut, and it’s the leading home gaming console in the $99.3 billion global gaming market.

“It’s been a long road for virtual reality,” said Andrew House, the CEO of Sony’s game business. “It has ignited a shared passion through all the levels of the company.”

The anticipation reminds him of the creation of the original PlayStation, he said. More than 230 developers are working on PlayStation VR games, he said, and Sony expects over 50 games should be available at launch.

“We always look for PlayStation to push the boundaries of play,” he said. “We have never shied away from new territory” when it comes to delivering gameplay for gamers. “VR is a big part of the future of games.”

Oculus is charging $600 for the Oculus Rift headset, while the HTC Vive will sell for $800. The Samsung Gear VR, which requires a Samsung smartphone, sells for $100.

House said Sony built the headset for optimum comfort, and he showed the final version of the headset. The headset has a 5.7 OLED screen at 1,920-by-1,080 RGB resolution. It runs at 90 to 120 frames per second. It has 360-degree tracking, a 100-degree field of view, sub-18 millisecond latency, and controls such as the DualShock 4 and PlayStation Move, which tracks motion.

The PS camera tracks the PS Move and DualShock controllers. It supports 3D audio, which means the sound can change based on the player’s head orientation.

“We designed a visor style that reduces the pressure on the player’s face,” he said. “We firmly believe getting the price right is part of any new technology.”

Sony showed a demo reel of a bunch of games that are in the works, such as Golem and 100 Foot Robot Golf.

It has an updated media player app for PS4 so players can enjoy omnidirectional videos and apps.