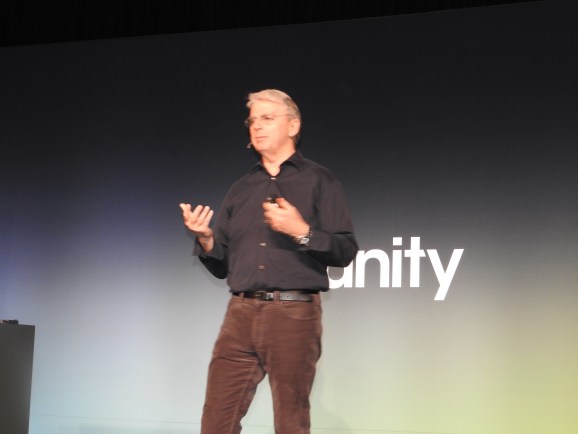 Unity Technologies is announcing two new versions of its game development software at the Game Developers Conference today. The San Francisco company also said that it has a 30 percent share of the top 1,000 revenue generators among mobile games.

Unity is trying to democratize game development, enabling anybody to make games. And it is plugging away at that goal, with more than 5.5 million registered developers. Games made with Unity’s tools now reach 1.5 billion devices, and there are 1.1 million monthly users for the personal edition.

Unity’s 5.3.4 version gives developers features and tools in a stable environment, while Unity 5.4 offers developers a chance to experiment in a prototype mode. Going forward, Unity will release its beta tools to personal edition users, allowing them to work on it and help find bugs. Unity 5.4 has new visual features, improved performance, and a VR rendering upgrade.

“We’ve achieved a lot in the past year,” said John Riccitiello, CEO of Unity, at a press event today. “Unity allows you to say ‘and.’ Not ‘or.’ You can have it all.”

After a beta phase that saw Unity Analytics integrated into 60,000 games, Unity today announced that its analytics service is moving out of beta and is available to all developers. Analytics is built into Unity. No new software development kit is required, providing easy one­-click integration. Included are heatmaps, data exploration, and integration of in­-app purchasing for multiple app stores including newly added support for Amazon Appstore, Samsung Galaxy Apps, and Tizen Store.

Now in closed beta, Unity Collaborate is a way for small teams to save, share, and sync their Unity projects in the cloud. Rival MaxPlay has made this feature a central part of its new game development engine. Riccitiello said cloud features have saved developers 600,000 hours in time in the past year.

Unity also announced the Unity Certification Program and Unity Certified Developer Courseware. These programs are designed to give developers the opportunity to prove their skills in Unity, achieve a qualification and use that to further their careers. Courseware will be available for purchase online soon and certification exams will be made available at Unity-­hosted events worldwide.

The program is designed to help companies more easily measure an individual’s Unity knowledge and skills and help with the assessment and professional development of their teams.

“Unity Technologies have rightly spotted the gap in the market and have managed to address it with a suitable approach that solves many issues for evaluating Game Design and Development skills of individuals,” said Damon Daylamani­-Zad, senior lecturer at the Department of Computing and Information Systems, University of Greenwich, in a statement. “This is especially useful for graduates, as they can officially demonstrate their skills to prospective employers. It also reduces the risk of employing developers and graduates as they can now support their [resumes] with an official evaluation. Finally, this approach also helps the higher education to align their focus with the industry standards.”

Meanwhile, Unity for Microsoft Hololens Tech Preview will ship on March 30, and Unity will add support for Amazon FireOS. Unity will also enable developers to make their games while inside VR, and it will support Nvidia VR Works technology and AMD LiquidVR as well, giving developers access to the latest graphics chip technologies.