Virtual reality so far has looked like a solitary experience. Ubisoft wants to show that it can be as social as sitting around a table and playing a board game with your closest friends — even if your fellow players are halfway across the world.

Last night, Ubisoft showed off Werewolves Within, a virtual reality game from its Red Storm Entertainment studio in North Carolina. Werewolves Within is a riff on party games like Werewolf and Mafia, where one (or more) players are the bad guys, and the rest must ferret out who’s out to kill them — and if people are telling the truth or lying about their roles. It riotous fun, but more importantly, it shows off how VR can be more than a solo experience. This is key to helping augmented and virtual reality gaming reach what tech adviser Digi-Capital estimates will be $10 billion market by 2020.

Red Storm has been making multiplayer games since the 1990s, and senior creative director David Votypka said his excitement for VR goes back to that era. Ubisoft demoed Werewolves Within on PCs with the Oculus Rift VR headset, and Votypka said that they’re targeting all major VR platforms for a fall launch, so don’t be surprised to see this running on the PlayStation 4 on its PSVR headset and tech. When asked about the Samsung Gear, a headset for mobile devices, he insisted that Ubisoft was targeting all major VR platforms but didn’t commit any further than this. It’s an online game, though you could play it with friends in the same room (if you have enough systems and headsets to go around, that is).

Werewolves Within touts a cartoony presentation, and that fits with the zaniness that comes about from players arguing and, well, fibbing about what role they’re playing. It casts you as a group of villagers sitting around a table (or campfire or magic ball, depending on the match’s background), and they have one night to figure out who the werewolf is. At the end of the debate (or argument, if your group goes in that direction), they vote on whom to kill. 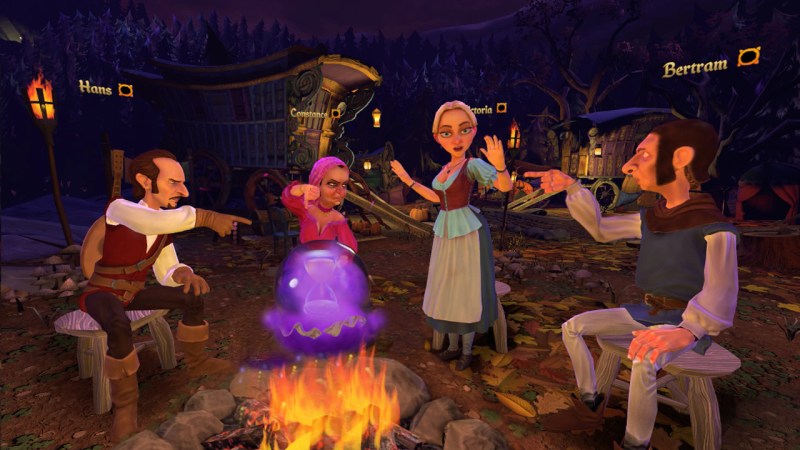 Above: Players can monologue, silencing the others for 10 seconds to make their case.

Players are on two sides. Thanks to position-tracking tech, the tracker can lean to one side or the other to help determine who the werewolf is — only they see the notification pop above that player’s head. Nudge your head over a character to highlight them, in case you’re thinking about labeling them as a suspect werewolf with a subsequent button press or just want to check them out. You can also move your head to navigate menus.

The villagers with special abilities use their skills to ferret out the werewolf. The watcher can learn two possible roles of another player, and they have a 50 percent chance of being correct. The gossip, being the town busybody and motormouth, can learn one possible role for up to two players.

The werewolf, of course, wants to remain hidden, and it can use its schnoz to sniff out the role of another player. They also know who the second werewolf is. The turncoat wants the beasts to win, so that player uses guile and other rhetorical tools to convince everyone else that a villager is the werewolf. If the turncoat is successful, they win. And then comes in the deviant, who wants to be killed. That player wants to convince everyone that they’re the werewolf — and if they do, and the village votes to kill them, they win.

With the position tracking, each player can whisper to another if they both lean to the side. This opens up a private voice channel, and no one else can hear (well, unless they are nearby in the same room, as was the case in the Ubisoft demo). At any time before the vote, a character can also monologue, standing up and muting everyone else for 10 seconds to deliver their case for whom should die. You can also make gestures with the D-pad, like pointing to another player.

Werewolf Within’s greatest strength may be the headset itself. By closing off the rest of a room and immersing players in this silly world, the headset keeps you from seeing any visual cues that someone may give off during a board game. Some folks can’t lie without cracking a smile or giggling, and others tug at their hair or avoid all eye contact. With the Rift on your face, you can’t see any of that, so you have to rely on the mechanics and the cases others are making — along with your own intuition — to solve the mystery of the werewolf’s identity.

It’s also a great example of a VR experience that isn’t tied to motion or how good you are at using a controller or playing a traditional video game — since so much of it focuses on your interactions with other players in the virtual world, it doesn’t matter who presses the button fastest or who has memorized a game’s map. None of that applies.

All that matters here is how good you are at figuring out who’s bluffing — and who’s not.

Even if they’re lying to your virtual face.

Correction 12:47 p.m.: Digi-Captial is a tech adviser, and we clarified their prediction on the AR/VR market to be just about gaming, not in general.