Kate Edwards, executive director of the IGDA, said in an interview with GamesBeat that the nature of creative work is that it is never really done, and poor planning can lead to uncompensated crunch. Surveys for the past two years show at least 37 percent of game developers say they are not compensated for crunch time, when they work long hours in a day or week to finish a game.

“We all know crunch is an issue, and that compensation can be an issue related to crunch,” Edwards. “That’s a huge percentage of developers who aren’t getting compensated for crunch. We know it is a persistent problem. Now, what do we do about it? We’d prefer to highlight the companies that are doing really well. If there’s an exemplary company, we will highlight them. If we found an example that is grievous, we’ll probably highlight that as well.”

The IGDA made the announcement at the Game Developers Conference, which is expected to draw more than 26,000 people to San Francisco this week. The IGDA is launching its third annual voluntary survey for developers today.

Uncompensated crunch time has been a challenge in the industry for the longest time, and it was drawn into the open by the “EA Spouse” controversy, when developer Erin Hoffman wrote an anonymous screed criticizing Electronic Arts for requiring employees to work long hours in the final process of shipping games — and then moving them on to new crunch time projects as soon as they finished. The 2004 episode drew a lot of attention to crunch time, but the issue has almost been forgotten again. 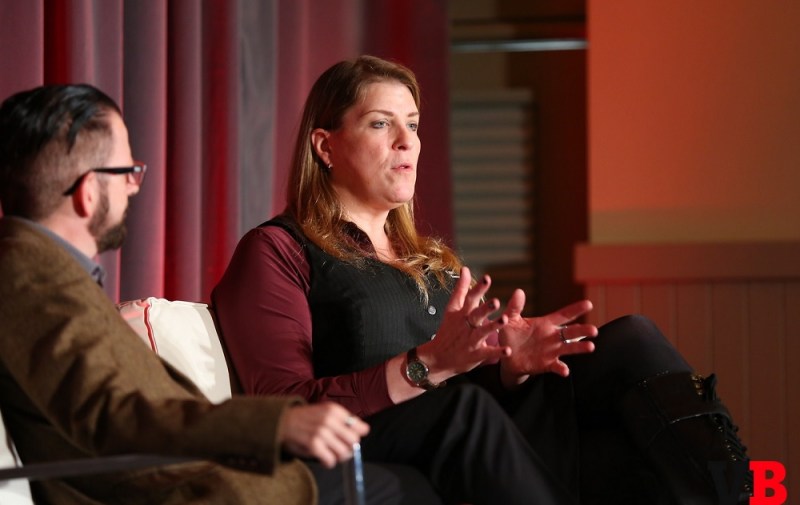 Above: Kate Edwards of the IGDA and Stewart Rogers of VentureBeat.

Edwards said the IGDA board of directors will privately raise their concerns with leaders at companies practicing uncompensated crunch. If those companies do not change their practices, then the IGDA may take more action, including publicly speaking out about those companies, Edwards said.

The IGDA will determine which firms have good or poor crunch time practices by collecting data in its 2016 Developer Satisfaction Survey (DSS), which the company also conducted in 2015 and 2014. Then it will break down the results from each individual employer on a percentage base.

But Edwards said that the IGDA may partner with a third party such as Glassdoor.com or Indeed.com, which allow employees to rate companies on a variety of measures. Such groups have already figured out how to handle things like degrees of anonymity afforded employees, who may fear retribution from management if they speak honestly about their employees, Edwards said.

“We could roll out all kinds of different issues once we set this up, like how are the companies doing on diversity,” Edwards said.

Game developers who would like to see their employer rewarded for treating them fairly or a change in practices at companies that do not compensate for crunch time are highly encouraged to take part in this year’s DSS, the IGDA said. Such companies may succeed in recruiting employees.

But not all is happy in the game industry. Edwards noted, “During the DICE Awards, I noticed the award winners going up and saying that they missed their kids. I’d like to ask you as a parent, ‘Ten years from now, would you like to have that award in your hand, or the lost time with your kid.’ Crunch has a real cost. If you crunch 70 hours a week, that will affect your health.”

Based on its DSS data collected in 2014 and 2015 and to be continued in 2016, the IGDA is acting upon the strong concern developers have expressed that uncompensated crunch time continues to be an ongoing factor that negatively affects job satisfaction and ultimately the longevity of game developer careers. When the IGDA has asked which company employees would like to work for, Valve Software in Bellevue, Wash., the maker of the Half-Life games and owner of Steam, is always at the top.

According to the surveys, of those experiencing crunch, nearly half are working more than 60 hours per week, with 17 percent working more than 70 hours. However, during these periods of crunch time, in 2014, 38 percent of employee respondents reported that their employers do not or are unable to offer any additional compensation for working overtime. In 2015, that number was comparable at 37 percent of employee respondents, Edwards said.

As previously reported in the IGDA’s DSS results, poor working conditions are the second leading factor contributing towards society’s negative perception of the game industry, with 55 percent of respondents selecting it among a list of provided factors. It also remains a major factor why game developers would choose to leave the industry in favor of non-game related technology jobs.

Edwards said that good managers will create realistic schedules and also encourage employees to take breaks or head home when they’re putting in too many hours. If the company does require uncompensated crunch time, it should inform employees of that fact at the outset.

The IGDA’s board members will have conversations with companies that get bad reports from employees. They will check into special circumstances, management beliefs, and the level of awareness of the forced crunch. If those companies do nothing, the IGDA will consider outing them publicly, Edwards said.