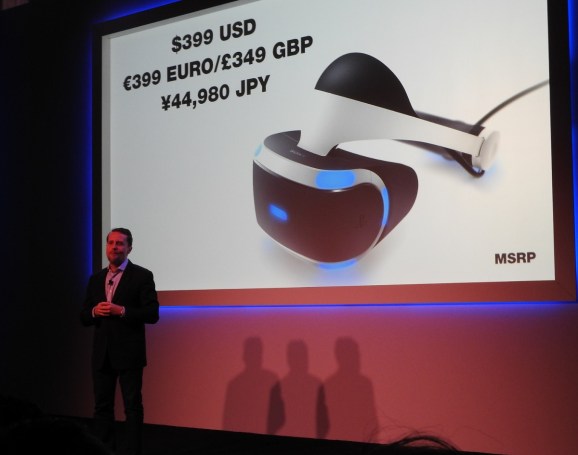 Sony announced yesterday that its PlayStation VR headset costs $399 when it launches in October. And that move has gone over well with industry analysts, who expect this to be a $30 billion market by 2020.

“I like the price point, but it doesn’t include all the necessary components, like the camera [and controller],” said Joost van Dreunen, an analyst at SuperData Research. “So I expect Sony to announce a bundled version that provides consumers with everything they need.

“The demos they showed were good, but none have the allure of being the critical killer app. Perhaps the collaboration with EA on Star Wars will play a part later this year. However, Sony’s support of the indie scene for VR is on-point and will prove vital to the device’s success. I am eager to see what a developer like ThatGameCompany [responsible for the landmark Journey game] can do with VR.”

Gartner analyst Brian Blau noted how the entire PS4 ecosystem makes VR look more attractive for the consumer when it comes to considering their wallets — and stressed the importance of software.

“It’s certainly a lot lower than the competitors,” said Brian Blau, analyst at Gartner. “Sony came in exactly where it was expected. They will do [well] with the 36 million fans that already own the PlayStation 4. $400 is a great holiday gift, compared to the price for the $1,500 PCs and additional costs for the other headsets.

“It’s really going to come down to the content that is available for the system. The Star Wars announcement was a surprise since Electronic Arts hadn’t voiced support for VR before. There has to be an ecosystem that works together, and Sony has that, with developers, a system, and distribution. I think it will do well.”

Liam Callahan, analyst at the NPD Group focused on how Sony will prep the market for its VR headset: “The $399 PlayStation VR price point checked a major box in consumer adoption, being significantly lower than their VR competitors. The next step for Sony will be using the time leading up to the October launch to provide details on their software lineup as great tech and pricing means nothing in video games without great games.”

Piers Harding-Rolls, an analyst at market researcher IHS said in an email that Sony has laid the foundation for early dominance in the high-end consumer VR market. He expect’s Sony’s installed base of consoles to reach 53 million by the end of 2016. And IHS forecasts that Sony will sell 1.6 million PlayStation VR units by the end of 2016, with the market constrained by supply of the headsets.

Across the market, IHS expects Sony to capture 64 percent of the installed base market share for high-end VR headsets in 2016.

“We believe that today’s news from Sony is very positive for the development of more mass-market friendly VR ecosystems and project 8 million PSVR units in its first 24 months,” Ben Schachter, and analyst at Macquarie Research, said. “We now believe that by holiday 2016, there will be VR hardware and software across multiple price points. We think that investors will recognize that meaningful dollars will come into the VR industry by 2017, with the potential to ramp significantly in 2018 and beyond.”

Schachter estimates there will be 40 million PS4s in homes by the launch of PlayStation VR in October.

“While HTC and Facebook are focusing on a broad adoption of VR across social, entertainment, and enterprise, Sony’s PlayStation team is laser focused on games and entertainment. Having EA’s Star Wars Battlefront as an exclusive VR title is a positive and highlights Sony’s experience in gaming,” Schachter said.

“A big open question is, what will Microsoft do to respond? With Hololens still years away and focusing on enterprise, how will Microsoft Xbox compete with PlayStation VR in the near term? Without a response, we would expect Sony to utterly dominate the rest of the console cycle,” Schachter said. “Additionally, Nintendo’s next console better have some particularly unique features if it hopes to be viable.”

He noted that the additional purchase of a camera, PlayStation Move, and controller will cost gamers more, with bundle prices packaged with a PS4 at $700.

“Outside of the mobile platforms such as Cardboard, PS VR seems like the best chance for VR to reach a mainstream audience. Both Oculus and Vive have some better technology specs, but the higher price points and high-end PC requirements will limit the end-market. As such, I would say it’s a compelling price point and launching ahead of the holiday selling season should give PS VR positive momentum.”