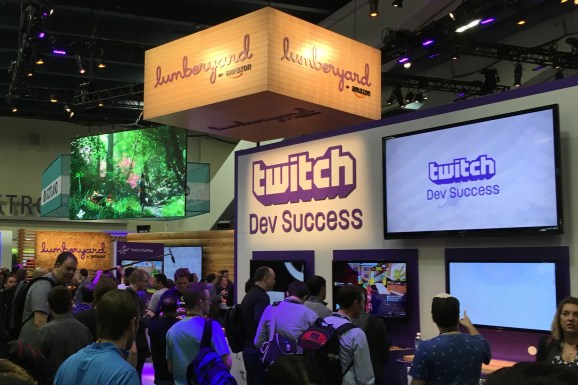 Amazon Lumberyard and Twitch at GDC 2016.

Hidden away on the exhibition floor at the Game Developers Conference in San Francisco today, I found a short line next to the big booth for Amazon Lumberyard, that cross-platform 3D game engine that public cloud infrastructure provider Amazon Web Services (AWS) unveiled last month. The line was for a virtual reality (VR) demo of a game powered by Lumberyard that features a cool integration with the Amazon-owned live streaming app Twitch.

Specifically, the demo was meant to show off ChatPlay, a way to “let Twitch viewers use chat to directly impact the game they are watching in real-time,” as Amazon explains on the Lumberyard website.

I put on an Oculus Rift CV1 and found myself in the middle of an elevator. I was told that people on Twitch were voting on whether I would live or die. They were following along with two live streams: one of me standing around with the headset, and one that showed what I saw in the headset.

I went up the elevator and stopped at different floors. Rocks and comets were flying at me. A monster with a whole bunch of tentacles was trying to capture me. The Amazon employee running the demo kept me up to date on what people were voting to have me experience — that is, whether I lived or died.

Later on, it dawned on me that Amazon’s acquisition of Twitch makes a lot of sense if you think about how it can be integrated with AWS. Google — with the Google Cloud Platform that can run games and other apps — has YouTube, which can support live streams through YouTube Gaming. Microsoft fields Azure, which comes with live streaming capabilities. But it’s not as simple as ensuring feature parity with the other public clouds. Anyway, AWS is thought to be considerably larger than both Azure and the Google cloud in terms of its amount of workloads and its revenue. The big deal here is helping developers go where the users are, and easily, at that.

Full support for VR in Lumberyard is coming soon, AWS says in its documentation for Lumberyard.