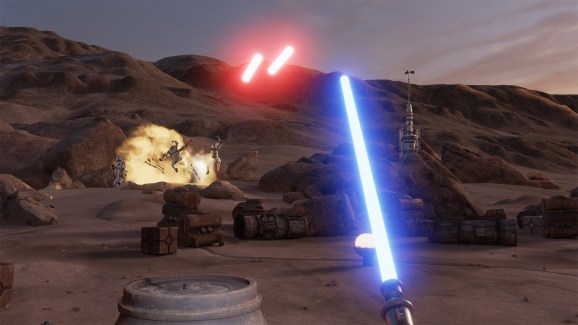 Star Wars: Trials on Tatooine is out now.

All I’ve ever wanted to do is hold a real lightsaber. Is that so much to ask? Well, according to science, yes. Yes, it is. So, the escape of digital entertainment has been my only hope.

When Nintendo released the Wii home console in 2006, I thought maybe its motion controller would give me a decent lightsaber substitute, but it’s imprecise tracking and poor graphics made that dream impossible. Micorosft’s Kinect tried to use motion controls to put a virtual lightsaber in our hands, but it was even less precise than the Wii. Well, Valve’s SteamVR has given me a new hope.

I checked out Valve’s Star Wars: Trials of Tatooine demo at the Game Developers Conference in San Francisco, a show dominated by VR with companies like Oculus and Sony showing headsets and games. Investment bank Goldman Sachs predicts that the virtual and augment reality markets will grow into a $110 billion business by 2020.

Trials of Tatooine uses the Valve-backed HTC Vive headset and its motion-tracking controllers. The experience starts with you standing in space, with the familiar Star Wars logo soon blasting into view. Even watching something as simple as the opening crawl was a unique experience in VR, as I was able to look down and see where the text appeared into existence.

Soon, I was transported onto Tatooine, and the Millennium Falcon soon landed practically on top of me (I couldn’t help but duck as it touched down). For a bit, it played out more like an interactive movie than a game, one that I could move around in thanks to a camera that tracked the controllers’ movements in the small room the demo took place in. Some TIE Fighters flew by, which Han Solo shot down from the parked Falcon’s turrets (man, those TIE Fighters can’t even take out a sitting target).

The Falcon suffered damage, however, and R2-D2 and I began to run repairs. This was when I used the motion controller to do things like lower a platform for R2 to access and push buttons on a panel. It was simple, but the controller’s vibrations reinforced how it felt like a tactile experience in VR.

Then, the real magic began.

R2 gave me my lightsaber. Once it was in my virtual hand — as far as my mind was concerned — I was no longer holding a controller. I was holding a real lightsaber that I could turn on. I felt it vibrate as I struck nearby boxes, and I could even make patterns in the ground with it (a smiley face, of course).

Stormtroopers soon began to swarm the Falcon. I used my weapon to deflect their blasts, just like in the movies. And I really did feel like I was in a movie. Sure, the actual game was simple and linear (I’m not sure if I could even really fail, since Han Solo eventually fired up the Falcon‘s lasers and took out the rest of the Stormtroopers). Of course, this was also a demo designed to run a specific amount of time so that as many people as possible could check it out.

Even as just a short teaser at what a VR Star Wars game could be like, Trials on Tatooine left me giddy. A game built with these mechanics could be incredible. Of course, I worry VR can’t won’t be able to accomplish some things, like a full-on lightsaber fight (the haptic controls can make you feel like you’re bumping against something, but they can’t offer full-on resistance).

But I finally got to feel like I was holding a real lightsaber, which is an experience that will have me smiling for days.