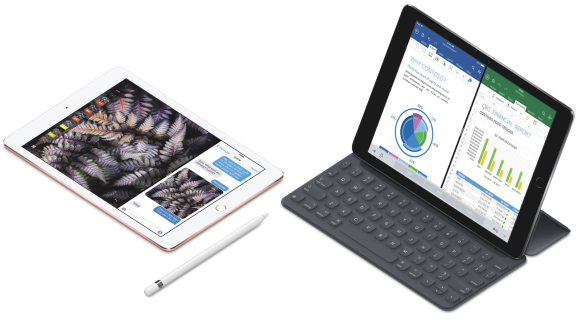 Apple today unveiled its second iPad Pro tablet at an event at the Town Hall facility at company headquarters in Cupertino, California. The new device isn’t the biggest or best iPad yet, but it’s certainly not the worst one, either.

Apple launched the productivity-oriented iPad Pro six months ago, five years after coming out with the first iPad — just as Apple followed up the MacBook laptop with the more powerful MacBook Pro. Now it’s adding to the Pro line with a smaller and less expensive version. The new one has a 9.7-inch display and will start at $599, while the original carries a 12.9-inch display and starts at $799. Many of the specifications of the first iPad Pro, including the 64-bit A9X chip, also apply to this second one. But the back camera is actually being upgraded from 8 megapixels to 12 megapixels, and it will be able to record 4K video, with Retina flash built in.

Today Apple is also showing off a new, smaller optional Smart Keyboard cover that fits the new iPad Pro. The new device is compatible with the previously released $99 Apple Pencil. Like the original iPad Pro, the new one only comes with Wi-Fi connectivity by default, and cellular support will cost extra. The new, smaller device runs iOS 9.3.

It’s both brighter than and less reflective than the iPad Air 2, Schiller said. The “Pro” Retina display has “true tone display” capability to measure ambient light and adjust the appearance of the display accordingly.

“In many ways, it’s the best display that we’ve ever built for an iPad,” Schiller said.

The new device is available in silver, gold, space gray, and rose gold.

In addition to coming out with this new iPad, today Apple is also pulling the covers off the new iPhone SE, along with new Apple Watch accessories.

The details of the new smaller iPad Pro match up with rumors over the past few months. Back in January, 9to5Mac‘s Mark Gurman said Apple was planning to debut this device in March, but under the name iPad Air 3. Within a few weeks Gurman reported that the tablet would in fact be a smaller iPad Pro, as opposed to a bigger iPad Air, and that the camera would be getting an upgrade. Last week Gurman broke the news about the $599 price.

Schiller today talked about a new Lightning SD card reader and a USB card reader that works with the new iPad Pro.

Orders begin on March 24, and the devices start shipping on March 31.

Above: Camera specifications for the new 9.7-inch iPad Pro.

More on the new, smaller iPad Pro is here.