Unity Technologies showed off some high-end graphics demos created with its Unity 5 game engine last week at the Game Developers Conference. That shows how the little game engine that could is growing up, and it is closing in on the visual quality offered by rivals, such as Epic Games and Crytek.

In a conversation with Unity’s chief marketing officer Clive Downie, we talked about that demo, other advances in game-engine technology, and new services that Unity announced as part of an effort to push the technological edge in the $90 billion video game industry.

Downie discussed the state of pricing for game engines, which are ranging from free (Amazon’s Lumberyard) to free with royalties on the back end (Epic’s model). Unity is staying put in offering its engine for free to those who make less than $100,000 in revenues on their Unity projects, with a set fee for those who make more money than that.

Downie wouldn’t comment on rival Epic Games’ tussle with Microsoft. (Epic CEO Tim Sweeney has argued that Windows 10 is not open enough, and Microsoft is moving to close off its app store.)

Here’s an edited transcript of our interview with Downie. 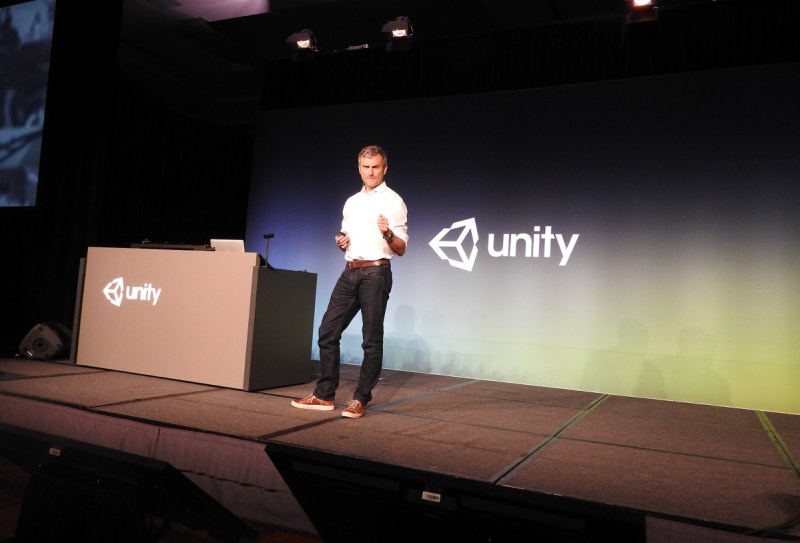 Above: Clive Downie, CMO of Unity, on stage at the Game Developers Conference.

GamesBeat: I wanted to ask generally about game-engine pricing and why everyone’s giving things away for free. Crytek introduced “pay what you want” just now.

GamesBeat: Where are you guys now?

Downie: You can use Unity Personal Edition for free, up to $100,000 of revenue a year from your project. Once you make more than that, we’d like you to pay us some money. We don’t go out of our way to enforce that. But Unity Pro is a perpetual license, and there’s various versions. You can do mobile add-ons and so on. Or, it’s a subscription, and we’re seeing more people go off the subscription because it suits the way people buy things these days. It suits the cash flow of many developers. They know what they’re paying each month.

That’s our business model right now. We’re happy with that.

GamesBeat: Do you include any kind of royalty?

Downie: No. Epic’s is the royalty rate.

GamesBeat: There’s a lot of experimentation going on. Developers seem pretty happy to be getting various things for free.

Downie: I’m sure they are. It’s probably good for developers right now. Most of our developers on the pro level are successful developers with a good revenue stream. Most of them are opting for subscription, as I said, and we think that fits our mentality of Unity as a service with regular updates. More of a back-and-forth relationship between developers and us.

There are so many different types of developers in our ecosystem now. You have 5.5 million registered developers, 25 platforms. You have the matrix of all the different possibilities. We find that you can only service the needs of that many with regular updates. Subscription matches that, so we’re happy to see a large number of people opting for that instead of the perpetual license model: “We’ll pay a large amount up front, and we’re not interested in a relationship with you.”

GamesBeat: What about when someone like Amazon comes in and says they’ll give it all away?

Downie: It’s free, but you need to use Amazon Web Services, which doesn’t come for free.

GamesBeat: Well, they came out later and said they’re not requiring that.

GamesBeat: What do you think of Tim Sweeney’s comments about Windows 10 not being open enough? He stirred up a lot of discussion about how the PC should be an open platform.

GamesBeat: As far as the highest tier, what do you know about that group of people? The developers who are most ambitious with the engine and need the most support from you. 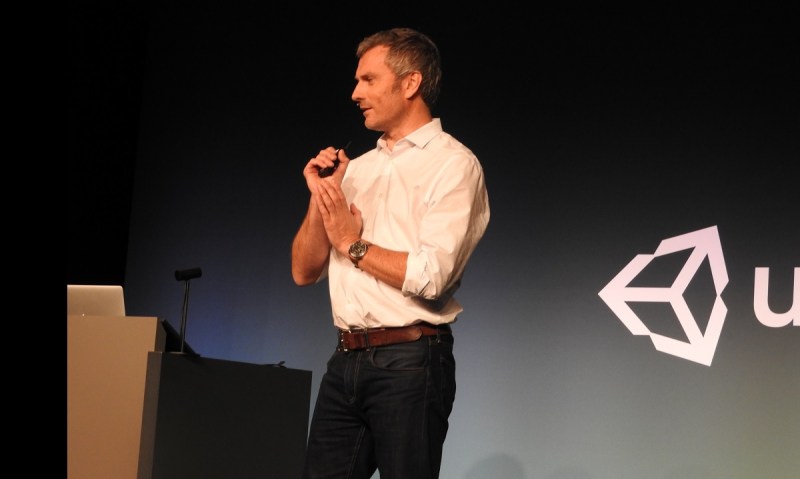 Above: Downie believes his game engine has the most momentum.

You have power users who don’t pay us because they don’t make any money, but they’re in the prototyping phase of killer apps that might change the world. They’re just not commercial right now. These might be people who’ve worked at big enterprise companies in lead engineering roles for 10 years, and they’ve now come out to become an independent developer and push the boundaries of what’s possible. But they’re still a Personal Edition customer for us. It’s tough to exclude those people.

That’s one of the reasons why we’ve opened our betas up to everyone. We’ve realized the value that exists in the Personal Edition route. While there are certainly hobbyists in there who are still learning how to make games, there are also very skilled game makers and creators who we have to know and have a relationship with.

GamesBeat: The Adam demo, was that made in-house at Unity, or was that somebody else’s work?

Downie: No, Unity made that. A team of very talented people in our Stockholm office made that in connection with the R&D team in Copenhagen who are supplying support.

GamesBeat: It does look like you’re pushing the bar on what the highest visual quality can be.

Downie: Quality and stability are things we touched on today, yeah. Visual performance, though, there will always be constituents of the developer community who need that. And then a lot more aspire to it. It’s important to always show you can make some pretty spectacular things with the tools.

GamesBeat: Where would you say you still have some work to do in that space, as far as going for the highest-end visuals?

Downie: We’re happy with where we are today. We think the cinematic image effects suite that Lucas presented represents a class-leading suite of features that are easy to use. In the hands of a master craftsman, they can deliver world-class visuals. Now, what we need to continue doing is optimize for performance on different platforms. It would be excellent to bring more of that level of power down to mobile GPUs without any performance degradation.

The opportunity for us to bring more of that into VR as well, which we continue to work on — 5.4 beta has better rendering capabilities for VR. It’s faster, the way it’s writing to the headsets now. Artist workflow is something we talked a bit about today in terms of the standard shader model and how it’s easy to bring textures across from some of the best shader products on the market without any degradation into Unity. But there’s more we can do for artist workflow, making the editor easier and more intuitive for artists to use. An artist can sit down and create large portions of the product.

In early working stage, we have something codenamed Director. It’s a visual sequencing tool that allows artists to input scenes into the product in a powerful way. We’re looking forward to bringing that to market in the future.

GamesBeat: How many VR projects and companies are you tracking now? Do you see many titles coming this year?

Downie: A large number of titles are coming this year. I can’t give a specific number. We try to be mindful of the intel we can take from our customers. But it’s growing. The more important thing isn’t necessarily the numbers. It’s really the aggregate quality. It’s a testament to the developers and how quickly they’ve been able to grasp the nuances of creating in a new space that’s fully immersive. It’s very different from creating a traditional game.

Second, it’s a testament to the R&D team at Unity and how quickly we’ve been able to allow the editor to output to those VR devices. That’s been impressive, when you think about how a year ago we just had standard plug-in support for some people. Now it’s full integration, build integration, directly into it. You work on your project and select Oculus or Steam VR and bang, the engine takes over. The runtime is transposed from your code, your source, directly down to the VR device.

We take those things for granted, but that happened pretty quickly, Unity being able to do that. That’s another reason why we’re seeing growth. It’s just easy to do. 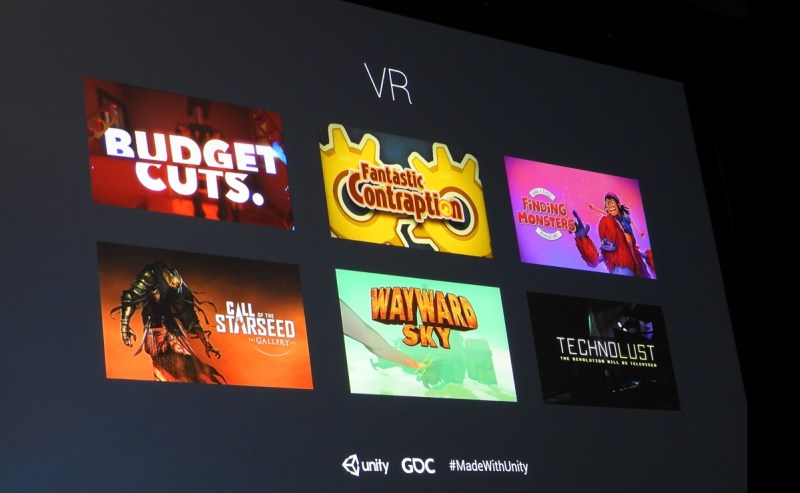 Above: Some of the Unity-based VR projects in the works.

GamesBeat: Do you think people want to design games in VR?

Downie: Using the VR authoring tool? Yeah, I think they do. I don’t even think it. I know it. We’re doing this is because what we hear. If you’re making a fully immersive scene that you’re going to place someone in and you want them to have presence within that, you need to feel it yourself. You don’t want to be making a scene in 2D, on a window, and then building it down to the device and putting on the headset and realizing, “Oh, that’s not right.” You want to be able to do it there and then. It’s going to lead to better experiences.

GamesBeat: I saw what the Basemark people are doing, some VR benchmarking. Does that seem like an important thing to do at this point? It seems like you can at least figure out if hardware is underpowered or where a game is bloated.

Downie: You’re right. In these nascent stages of platforms, there’s a lot of exploration and pioneering. One of the beauties of the Unity community of developers is that it’s large enough that there’s always something to learn from someone who’s gone through the hard work of a process because they chose to go first. Statistically, you don’t get that with a smaller community. You miss out on things. You have to reinvent the wheel a lot more.

That’s one of the values of having the footprint we do. Our developers benefit from millions of others going through those problems and learning from them. 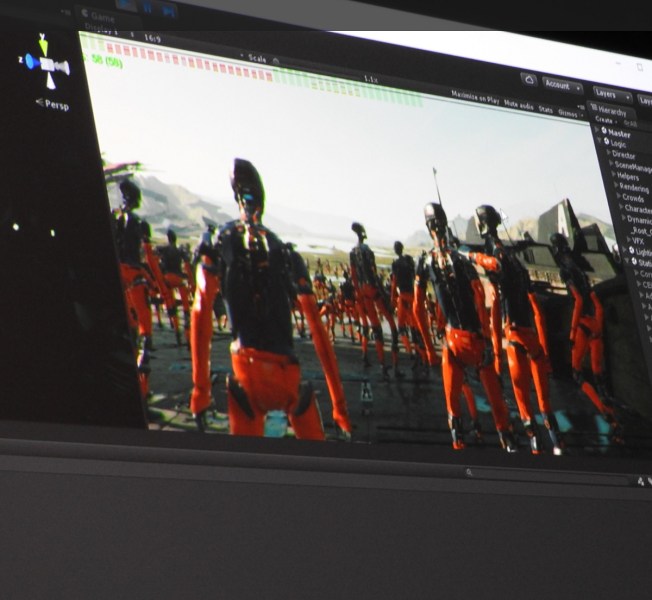 Above: Unity’s robot demo ups the quality of 3D graphics for Unity users.