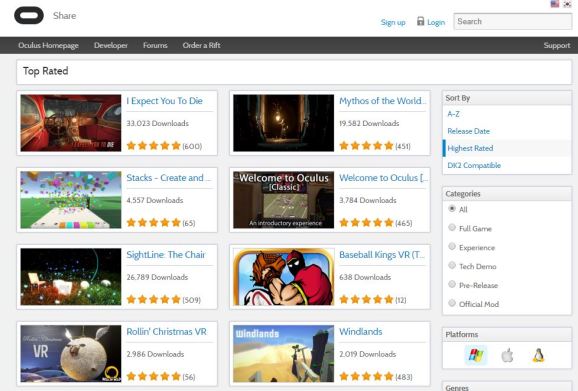 The Oculus Rift headset goes on sale in one week, and the virtual reality company is working to ensure it’ll have plenty of content ready to go when people plug in their Rifts for the first time.

To help developers distribute games, Oculus VR operates the Oculus Store, and the Facebook subsidiary held a panel at the Game Developers Conference last week to help studios understand what it’s like releasing a game for Rift and the Samsung Gear VR. Oculus has clearly thought through a beginning-to-end process that will facilitate studios as they begin development and as their products go live. And for good reason: Oculus will get a cut of any game sold through the Oculus Store. In a market that could generate $30 billion by 2020, according to tech adviser Digi-Capital, those revenues could stack up quickly.

During the presentation, Oculus engineer Joe Paley detailed how developers can share early builds, can sell their Oculus games on their own site, and can generate income once they ship the final product.

This begins with developers signing up for their Oculus developer account. Studios can then start releasing their games across various channels on the store. Paley points out that creators can use these release avenues to control who is getting to test certain versions of their game. Instead of just sending over the raw files for an Oculus game, a developer can add a YouTube personality or media outlet to the alpha channel, and that person will get an email with a link to redeem the game on the Oculus Store. If the developer goes on to update or wants to revoke access to that build, they have that option.

“There are four different release channels,” said Paley. “These are Live, Alpha, Beta, and Release Candidate. The Live channel has a special meaning. The games I upload here are the ones that will go to the Oculus store.”

But Paley says that it’s up to developers to determine how they use Alpha, Beta, and Release Candidate since Oculus has no strict definitions for those channels. This is just about empowering developers to get feedback however they want. That’s also why Oculus doesn’t force studios to fill out details and picture fields for their games until it’s time for them to go live. But once that does happen, the games will go out to the Oculus Store, which Paley points out has a number of its own features.

“The Oculus store is the primary way for users to discover content,” said Paley. “It will also do things like run sales and features.”

Of course, Oculus curates its store. That means studios have to submit their games for approval. Paley explained what they’re looking for when it comes to that.

“They should be, one, finished and delightful; two, should have VR-specific content; and three, should be comfortable,” he said.

But once you get through that, a developer can begin doing things like generating as many free codes for the game as they want. Studios can then do whatever they want with those codes including selling them on their own websites. Gamers will still have to use Oculus Store to redeem those codes, but that’s a good deal for developers.

Finally, Oculus confirmed that it is bringing in-app purchases to its toolkit. These will work both with recurring payments for usable items and permanent content like downloadable add-ons.

Oculus is trying to provide all of the features that every studio wants while keeping everything as painless as possible. This is crucial to keep developers making VR games in the early days when the install base for Rift is tiny but hungry for new games.

Corrected at 2:41 p.m. on March 22: This story originally conflated Oculus Share and the Oculus Store.