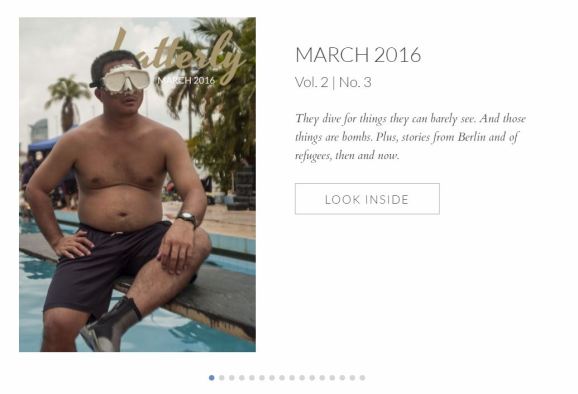 The last issue of Latterly Magazine.

Latterly, an online-only, reader-funded magazine that published works of narrative journalism, particularly from foreign countries, published its final issue on Friday. I was excited about Latterly when I found out about it in 2014, but unfortunately, the business couldn’t pay for itself.

Cofounder and editor Ben Wolford started to talk about the reasons for Latterly’s closure in a letter to readers a few weeks ago, but it didn’t go into much detail. So I checked in with Wolford to learn more.

While Latterly did gain subscribers, Wolford suspects that certain structural elements of the magazine were not perfect. He shared that he would do some things differently if he were to do it all over again.

“I think I would drop the paywall and allow some ads on the site,” he told me in an email. “Ineffective marketing was one of the reasons our subscriber base didn’t continue to grow (at peak we had 315 subscribers; at close it was about 265), but it’s also just extremely difficult to get people to pay for journalism.”

There are, of course, a few major media outlets that use paywalls, though they’re metered in varying degrees: the Financial Times, the New York Times, and the Wall Street Journal. Technology news website The Information, which employs a few Journal veterans, joined this group in 2013.

But again, the paywall on its own might not be the only issue.

“I’m hesitant to say that the reader-funded model failed for Latterly because I don’t know if it was a failure of the model or a failure of implementation (marketing and promotion),” wrote Wolford, who noted that he was essentially doing Latterly alone, which didn’t help, either.

The good news is that Latterly did have fans.

“If anything, the 14-issue Latterly experiment showed me that there is an audience for this kind of in-depth, personal, international reporting,” Wolford wrote. “They’re journalists, NGO workers, travelers. And they had a lot of encouraging things to say when I shut it down.”