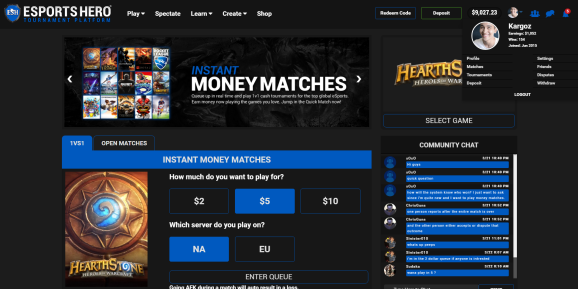 It's time to start making money!

You don’t need to quit your job to start making money from playing games.

Esports Hero is a fresh startup in the competitive-gaming space, and it has raised $1 million in financing to expand its real-money cash tournaments. Esports Mogul, an Australian investment group, led the round. With this influx of cash, Esports Hero is hoping to attract new players from a variety of skill levels while also building new features into the platform. Pro gaming is a budding business that already has 188 million people regularly tuning in for events for games like multiplayer online arena battler League of Legends and shooter Counter-Strike: Global Offensive. Intelligence firm SuperData Research projects esports will generate $2 billion in revenue by 2018, and Esports Hero has a strategy to capture a piece of that.

To flesh out its approach to esports, the company has also brought in a veteran of the space in Andrew Schneider to act as a board director and founder. Schneider previously worked at Sony and Live Gamer — the latter of which specializes in getting players to spend money on digital goods. That experience should translate into getting players to put money into Esports Hero’s real-money matches.

“Esports Hero is a website where people can compete for money instantly,” chief executive officer James Heldridge told GamesBeat. “Our core offering is a match service where gamers can play one-on-one microtournaments. They can deposit money into an ewallet, select their game, and decide how much to play for. They get matched up in real-time with someone around the world and have a great time doing so.”

This works with games like Hearthstone and Dota 2, and a lot of those work automatically thanks to integration with Esports Heroes. Additionally, the company has games like Super Smash Bros. for Wii U, which requires players to self-report the results. In most matches, players put up a small amount of around $2 to $5, and then go to battle. As a player racks up their winnings, they can then either cash that money out into their bank account (which can take a day or two depending on their region), or they can spend their money on gear and other items in Esports Hero’s store.

Above: Esports Hero claims that a lot of players enjoy dropping their winnings on new hardware.

In the background, Esports Hero has all kinds of tricks to prevent nefarious things like cheating and even money laundering. The company wants everyone to feel comfortable coming into the site and throwing a few bucks down on some matches. If they have a good experience, they might start inviting in their friends.

So far, Esports Hero has seen a few people make a nice chunk of change while only playing part-time when they’re not working their day job. The company thinks it can serve that audience well since most of those people are never even going to make a real effort to tour on a pro scene.

Finally, the startup also has plans to serve up features for traditional pros. It is talking about crowdfunding special events between well-known players. But, for now, it’s focusing on building up a strong base of every-day competitors.