Mobile games publishers have to take incredible care when acquiring new users, since the vast majority of them don’t buy anything. In fact, only 0.19 percent of all players contribute 48 percent of revenue, according to a new report from mobile marketing automation and engagement firm Swrve.

Swrve also found that 64 percent of players who spend money in games only do so once in the month (up from 49 percent in the original study last year). But it’s not all bad news for publishers. Total volume of spending per month increased by nearly $3 per player to $24.66. Mobile gaming continues to gain popularity — that’s the great news. But with app marketing tactics like push and triggered messages becoming more popular across all categories of apps, competition for a user’s attention is also increasing. 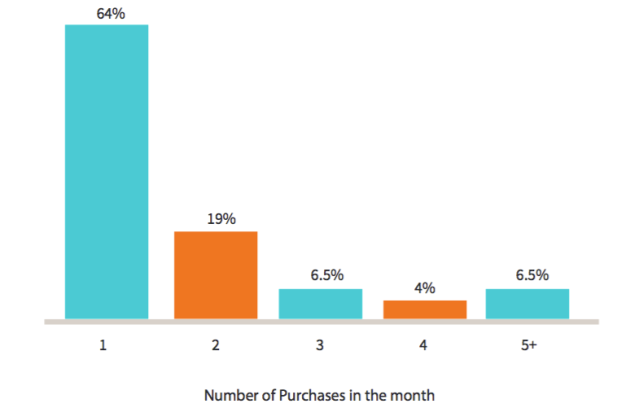 Since the freemium model is still the most popular and successful approach to mobile game monetization, it’s critical that publishers understand the drivers for engagement and are equipped with the tools to constantly test and iterate, with their audience in mind.

We’ll be discussing how to build a data strategy to account for explosive mobile growth this Thursday in San Francisco with top publishers like DocuSign, HotelTonight, Touch of Modern, and Bleacher Report. Register for the mobile data strategy event now.

Here are some more of the key findings in Swrve’s report:

I asked the leadership team at Swrve how publishers can take action using the data in this report. Swrve’s VP of marketing, Tom Farrell, shared a few tactics with me. “Keep selling after the install. It’s a mistake to believe that the user who installs has already been ‘sold’ on your game. When there’s no purchase cost, that’s not necessarily the case, and you should take time during the initial experience to remind users why they downloaded and are playing your game.”

Farrell also said that game developers should focus on tutorial so players can immediately understand why they’re in the game. He advised measuring where players have difficulty in the game and building creative ways to address those issues.

SVP of product, Sean Handle, told me that the number one consideration for publishers when distinguishing the freeloaders from the payers from the “whales” (users that drive the majority of revenues), is keeping fraud in mind. “For Android, 20 percent of in-app purchases are fraudulent,” he said. “Our customers were having a lot of issues, not because of lost revenue — it’s not revenue they would have received anyway — but more to do with those type of users getting into the game and polluting the statistics that govern their game mechanics. Twenty percent of users [provide] in-app purchases at different points in the game that don’t occur naturally.”

Swrve’s report comes from data collected from “tens of millions of users” in the month of February and provides a snapshot of how gamers monetize. (It doesn’t represent lifetime value.) The Swrve platform processes over six billion events a day.