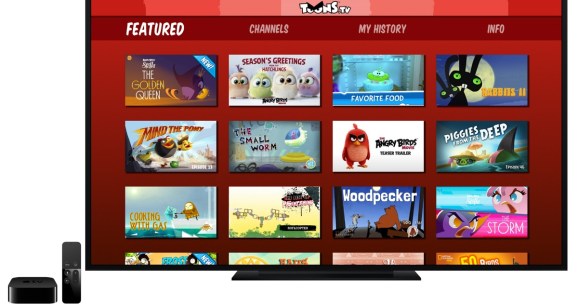 The move shows that Apple is still trying to get content to attract viewers to its Apple TV platform, which is its major effort to get iTunes content into the living room. The ToonsTV channel, created by the Rovio Animation Company subsidiary of Rovio, has already had more than 5.6 billion views across its 30 channels.

Los Angeles-based Rovio Animation is a division of Helsinki’s Rovio. About 80 percent of its content comes from Rovio, said Tommy Korpinen, president of Rovio Animation, in an interview with GamesBeat. But there’s also a lot of third-party content such as NASA’s Rocket Science show, Wallace and Gromit, Shaun the Sheep, National Geographic’s Zooville, and Pucca by Vooz.

“We have been working with Apple on multiple fronts, including games for many years,” Korpinen said. “We have our feature film Angry Birds coming soon.”

ToonsTV is currently featuring an Eggs, Eggs, Eggs channel of Easter-themed episodes from the platform’s various properties, including “EggsHaustion,” an all-new episode of Angry Birds Toons. Another major focus is a new series of humorous Easter Egg “unwrapping” videos, starring the feathered hands of Red from the Angry Birds flock.

ToonsTV has amassed more than 5.6 billion views since 2013, when it was first hatched. In October 2015, ToonsTV launched as a standalone app for iOS and Android devices.

“Mobile has been key to this effort,” Korpinen said. “It works extremely well. We have a large addressable audience, and we are excited about this new opportunity.”

Rovio Animation has 60 employees, but it does not break out revenues.