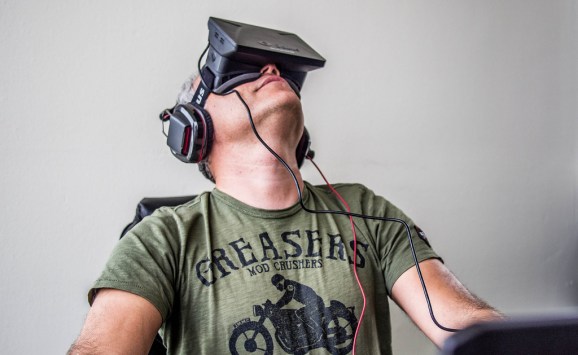 If you’re unsure if your PC can run Oculus Rift, the minimum specifications show exactly what you’ll need. NVIDIA GeForce is playing a big role in helping gamers get the best possible virtual reality experience and performance on Oculus Rift with its VR Ready Program, which identifies if your PC hardware is up to the task of powering next-gen VR.

Oculus Rift offers a whole new way to experience games: intense, immersive and easy to lose yourself in the action. The hardware might be fantastic, but if the games don’t come up to scratch then there’s really not much point, but thankfully the Rift is launching with 30 games ready and waiting to play, plus plenty more to follow.

For the thrills of leaping into a nippy little space fighter and blasting the living heck out of a swarm of enemy ships, look no further than EVE Valkyrie. Set in the same universe as the mighty EVE Online, this is an all-new affair, built with VR in mind and focused on intense multiplayer dogfights. If you pre-ordered your Oculus Rift, then you’ll be getting it for free; if you didn’t, then you definitely don’t want to miss out on one of the most promising VR games on the horizon. It’s essentially all the best space battles from Battlestar Galactica rolled into one superb game, with all the dizzying realism of being right there in the cockpit with only your fighter’s canopy protecting you from the vacuum of space.

Floating in space sounds like a lovely idea until you’re actually there, you’ve lost your memory, you’re surrounded by pieces of a wrecked space station, your spacesuit’s leaking, and there’s no apparent way to get back to Earth. And that’s exactly what 505 Games’ ADR1FT is all about. It’s billed as a first-person experience rather than just a game, and it looks set to deliver. With the air running out and a bad case of amnesia, you need to find the necessary bits and pieces to patch your spacesuit and hopefully repair a damaged emergency escape vehicle, all the while trying to discover what happened to the space station and its crew, in an atmospheric fight for survival without any actual atmosphere.

VR offers plenty of opportunities for out-of-this-world experiences, but if you want something equally alluring but a lot more down-to-earth, then Project CARS might be just what you’re looking for, putting you in the driving seat of 125 finely-tuned racing cars for the ultimate in high-speed track action. Combine your Oculus Rift with a steering wheel and you’re all set up to enjoy racing at its most intense, on over 100 circuits in over 35 locations and against opponents worldwide. With a full day/night system and weather effects, it’s tops for realism, and let’s face it, it’s the closest you’re likely to get to being behind the wheel of a McLaren F1.

If you’re after something a little more thoughtful and challenging for your Oculus Rift, then Gunfire Games’ Chronos could be just the ticket: it’s an atmospheric RPG where the passage of time makes a difference to how you engage with its mysterious world. As a young hero, you’re out to save your homeland from an encroaching evil, and the only way to do that is to head into an ancient labyrinth that only opens once a year and try to unlock its secrets. Fail and you’re booted out to wait another year for it to re-open, and as the years pass, and you become older, your skills and approach to the labyrinth change; no longer young and nimble, with age comes wisdom and skill with magic, enabling you to tackle its challenges in new ways.

You’ll want to wrap up warm for Edge of Nowhere; not only is Insomniac Games’ third-person action adventure set in the chilly climes of the Antarctic, it’s also a dark and unsettling story that’ll give you the chills. Sending you off to the bottom of the planet in search of a missing expedition team, it’s a journey into insanity in which nothing is ever quite as it seems, and it’ll get the adrenaline flowing with some hair-raising mountain sequences in which you make some vertigo-inducing leaps across icy crevasses. It’s all very tense but thoroughly compelling, as you attempt to find the missing team without losing your mind.

Free with every Oculus Rift comes this delightful platformer from Playful Games that’s going straight for the Mario jugular. Starring Lucky, a suitably lovable cartoon fox, it’s a virtual reality adventure with plenty of running, jumping, climbing, and spinning through a colorful and vibrant world that’s been designed especially for VR. Of course, there’s an assortment of weird and wacky creatures to avoid, not to mention the inevitable boss battles plus a host of mini-games to master.