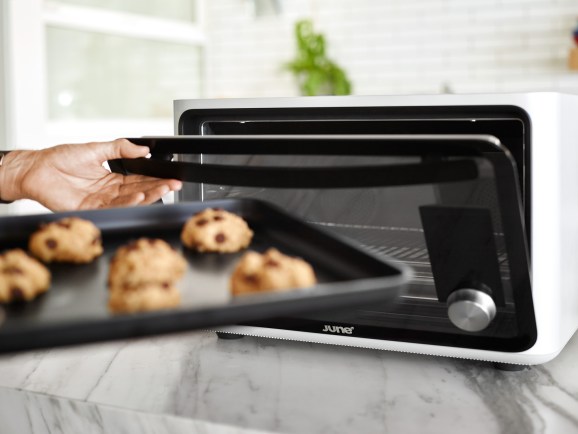 June announced today that it has raised a new round of funding, adding $22.5 million to its coffers to support not only the team, but also its smart oven device. The round was led by Eclipse and included the participation of Sound Ventures, Vaizra Investments, Promus Ventures, and Lumia Capital. Existing investors like Foundry Group, First Round Capital, Lerer Hippeau Ventures, and others repeated as investors.

The company will use the latest funds to “expand our team, work steadily towards our ship date, and deliver the absolute best product” to customers. Along with today’s funding announcement, June revealed that it has pushed back the shipping dates on its first set of orders, moving it from late spring of this year to the holidays.

Launched in June (seriously!), the maker of an intelligent oven wants to make sure that the food that is being prepared is optimal and safe. It was priced at $1,495, making it more expensive than others in the space like Tovala. The device contains a camera that uses deep learning to figure out what you’re cooking and then sets the appropriate temperature so you have a well-prepared meal.

As the company has been preparing to ship its device, other enhancements have been made, which apparently is delaying shipment. The reason for the deadline push back is because June has redesigned the heating architecture, which it says will allow the oven to “provide more even heat distribution, better broiling, and significantly improving its baking performance.” Additionally, new manufacturing partners have been contracted to provide plastics and cosmetic sheet metal for the oven.