Jay is ready to attack.

First they were just a couple of stoners hanging outside a convenience store. Now they could be video game stars.

The characters Jay and Silent Bob have been in numerous movies, comics, and more since their debut in the 1994 Kevin Smith film Clerks. Now, developer Interabang Entertainment is trying to crowdfund a 2D brawler based on the characters via the site Fig. With six days left in its campaign, Jay and Silent Bob: Chronic Blunt Punch has raised $337,901 of its $400,000 goal.

GamesBeat interviewed Jason Mewes, the actor who plays Jay, and developer Justin Woodward about the project, the reasons they characters have so many fans, and the pressures of crowdfunding.

Above: Those are some interesting enemies.

GamesBeat: You guys are crowdfunding right now on Fig. Why go there and not Kickstarter?

Justin Woodward: We’ve done two Kickstarters. It was a lot of work for us. I was actually working out of Double Fine, in their indie space, and they brought us in. That spun out of Double Fine. We were friends with them already. They’ve been extremely supportive of our campaign. They helped us get Area 5 to shoot the video, fly everyone out. They flew Jason out today to come talk to you guys. And then also hired a PR person to help with the campaign and figure out different algorithms for ads.

It just made sense to have someone there who has your back. We’re developing the game and coming up with the creative vision, and we have someone else who can help. Also, it’s focused on just games. They know that space.

GamesBeat: These characters have been around awhile. Has there ever been talk of doing a game with Jay and Silent Bob before?

Jason Mewes: Yeah, I’ve definitely wanted one for a while. We did sort of do some smaller app games a couple years ago. I was psyched about that. I’ve always talked to Kevin [Smith] — hey, what do you think we have to do? But we had no idea how to get involved in doing it even if we wanted to. Kevin wasn’t against it. I just think he has enough going on that he couldn’t say, hey, let’s figure it out, let’s find people, let’s do this.

But I’ve always thought — I play a ton of games. I was always like, how awesome could Jay and Silent Bob be? One of their weapons could be pot leaf throwing stars. Just silly things like that. Luckily these guys came to us. Trevor Fehrman, who plays Elias in Clerks 2, and Justin, they came up with a great idea, the concept and the way it’ll be played.

I was stoked when they said they were interested in doing this, would you be interested? I was like, hell, yeah. I’ve been thinking about this forever. Honestly, I’ve always wanted to have a game. We have comic books, Kevin and I. We have the action figures and the movies. We have cartoons. It seemed like the next thing. The only thing we were missing was a cool video game. I’m glad it’s happening. 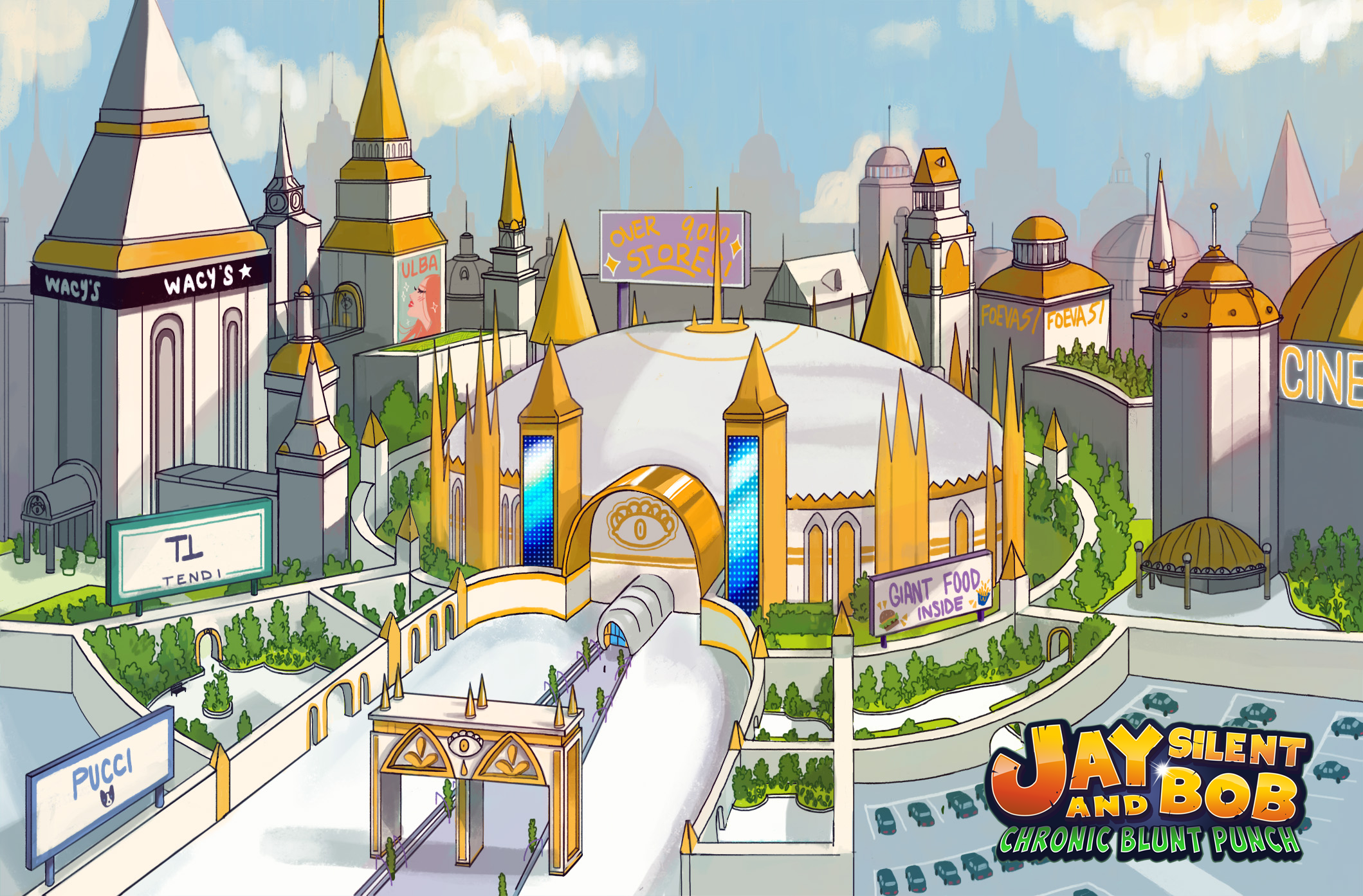 Above: That’s one fancy mall.

GamesBeat: Jason, what kind of games do you play?

Mewes: I play all sorts of games. Mainly right now I’m into — if I’m on my Xbox or PS4 — I play more sports stuff on PS4 for some reason. I play some NHL and Madden and soccer, FIFA. But mainly Call of Duty. I always go back to Call of Duty on Xbox One.

I plays tons and tons, more than anything else, of Injustice on my iPad. I love the Injustice app game. They just came out with the new Superman vs. Batman characters. You got Wonder Woman, Superman, and Batman as new updated download characters, new gear cards. It just gets better and better. I play that a ton. I fly around a lot and I’m all over the place, so it’s great to bust out my iPad and I’ll play a couple games and put it away and then open it up again. So mainly Injustice, and then Call of Duty when I get to squeeze it in. I haven’t had a whole lot of time recently with the traveling and my 1 year old.

GamesBeat: You settled on this old-school beat-’em-up style for this game. Why did you gravitate toward that?

Woodward: Big Killer Instinct fans. Our first game was a beat-’em-up. We’ve learned a lot from that. We wanted to bring it back. It seems perfect for this universe. We have different ideas. It’s going to be highly animated, hand-drawn animation. We’re taking it up a level there.

Also, there’s a nice tag team component we feel will be really cool. I don’t know if you played Arkham Knight, but we have the tag-team where you switch between them to do combos. We actually thought about that a while before, a year before, and then it was like, oh, shit, when they showed that. You start off with Jay or Bob and swap between them during combat. If you play with a friend you can do combos where you connect together, where Bob will throw Jay and do a jump kick at them. Things like that.

If you remember The Simpsons [arcade game], when you get to it, the core gameplay will be all that kind of stuff. We’ll think of different creative ideas. We’ll have assists come in like Bartleby and Loki.

Above: Why walk through the park when you can brawl through it?

GamesBeat: I was wondering if there would be a lot of references to the whole View Askewniverse.

Woodward: Yeah, we’ll throw in a ton. Jason has a bunch of ideas too about characters we want to put in. We also have a convo combo system, a conversational combat, where you jump in — we want to have those quick quips, really witty. I don’t know if you’re familiar with the Monkey Island games —

Woodward: It’s like that, but it’s more dynamic, fast-paced, where you have phrases in bubbles above their heads, they grab them and link up into an insult, and then you attack the enemy with it. We’re devising that system. We wanted to have a really cool story-driven experience, be fun for the fans.

GamesBeat: Jason, you said you didn’t know a whole lot about video game development before. Has this been an interesting opportunity for you, to see how games are made?

The process with the crowdfunding and how that works, too. I’ll get to be part of it the whole way. I’m always down for stuff like that. Anything that involves art and technology, which I’m huge into. I really dig stuff that I don’t even know how to use. I love the Cintiqs. I know about them, because there’s a store by me, Mac Hollywood, and I’m always in there getting a new iPad case or something. They’re like, the new Cintiq 24HD! And I’ll mess around with it even though I don’t know how to use it. It’s just interesting to me. I love gadgets. Again, this is cool, because I get to see the process and all that.

Woodward: We were at Double Fine a few weeks ago doing a Twitch stream there. He was clowning — is that a Bamboo, son? Like, who knows what a Bamboo is? It was amazing.

Above: You can fight with your words.

GamesBeat: Crowdfunding is an exciting platform. You can get funding straight from your fans without going through a publisher. But is it a little nerve-wracking too? Checking in every day to see how you’re doing.

Woodward: It is, but it’s also a good experience, because you see the love people have. There are super fans who are so down and give us good feedback, tell us what they like about the universe and what they want to see in a game format. It’s very gratifying. Seeing the numbers and trying to figure out how we can push the numbers up, that’s definitely nerve-wracking, but —

Mewes: It’s nice, too, to see. You see, oh my gosh, someone donated $10,000. That person really likes us. It’s fun to check in each day. During the weekend it only went up one percent, but on a weekday it went up eight percent. The different days and how it works, it’s fun. But it is nerve-wracking, too. I guess for me, ego-wise, more so than even Justin and them — because I’m part of the Jay and Silent Bob name and universe — being honest, my ego will say, oh, man, nobody wants to play our game if we don’t make it. Of course it’s a little stressful and I hope it comes out.

GamesBeat: You’re putting your name and face on it, yeah.

Mewes: I’m happy with where it’s at. I don’t know enough about the process to see, but to me it seems like it’s in good shape with two weeks left. It’s at 65 percent. We just need 35 percent more to the goal in two weeks.

Woodward: Another interesting part of it on the backend, seeing the ideas come together on the page as a team when we’re doing prototyping and doing concepts, showing people what it is — it’s gratifying. People say, oh, that’s so cool, you should do this, or this doesn’t make sense. We have to adjust our mindset about how we’re pitching the game to the audience and figuring out what they like.

Above: Looks like a good place for a brawl.

GamesBeat: Does the crowdfunding and not having a publisher allow you to go a bit farther with the content than you would have if you had to work with a bigger company?

Woodward: Definitely. That’s some of the indie spirit we have. These games, they’re honest. They’re irreverent. They’re hilarious. But they have a certain humor that may not be mainstream, even for a video game audience, the guys at the big mainstream publishers.

GamesBeat: It’s been a while since Clerks. It’s something, how these characters still resonate. There are still a lot of popular characters from Kevin’s movies, but why do you think Jay and Silent Bob are the ones everybody knows?

Mewes: I feel like over the years, what it seems to me — a lot of people say, hey, I have a friend just like that. I have cousins just like that. People can relate to Jay and Bob because of how tight their friendship is. Jay, how he just speaks his mind and says whatever he’s thinking.

And you mix in the marijuana — a lot of people like marijuana. “Those two guys like to smoke, we like to smoke.” Or I’ve even heard people say they like the characters because that’s who they’d want to be if they could. Some people don’t speak their mind. They really want to say something and they’re afraid to do it. The Jay character will say whatever he’s thinking.

People come up to me and say, I wish I could just say what I’m thinking half the time. People can relate to the character — they have friends who are like that, or they wish they could be like that. That’s what it seems like to me, from what people have said to me over the years.