I’ve been hanging out a bit at the Upload Collective, a new virtual reality incubator started by the founders of UploadVR, to soak in the enthusiasm that Silicon Valley has for VR. During the Game Developers Conference last week, I attended the Upload Collective’s coming out party, which transformed the place into a fancy nightclub with cool arcade-like VR stations. And last night, I went to an event where normally sane investors went crazy and talked about how they’re investing on faith in VR and augmented reality. The investor event, with wine served by beautiful models, was just about as packed as the party with free booze.

I have heard people talk about how they believe in VR, and this is the basis for their enthusiasm and their bets. We’re at the dawn of the VR age, and a lot of people are going nuts about it. From the safety of the sidelines, I’m convinced I’m about to see a lot of people I know get filthy rich. But I’ll probably see an even larger number of believers go bust, as the odds in these Hunger Games are ever not in their favor. It’s like we’re setting up the stories of the future right now. A few years from now, I’ll cry because I didn’t jump into the VR fray myself. But I’ll be able to say ‘I told you so’ to all those who go bust.

Oculus VR announced yesterday it released its initial shipments of the long-awaited Oculus Rift, a virtual reality headset that promises to transport us into virtual experiences that we won’t want to leave because they’re better than real life. Digi-Capital estimates that AR and VR will be a combined $120 billion market by 2020. The March 28 launch of the Rift will be quickly followed by the HTC Vive headset from HTC and Valve, as well as the PlayStation VR coming in October for the Sony PlayStation 4. And no doubt we’ll hear more about mobile VR launches to come. In China, dozens of me-too VR headsets are hitting the market. In the middle of a bear market, everybody in VR is raising money, including Upload VR itself, which bagged $1.25 million from a Chinese investor in December. 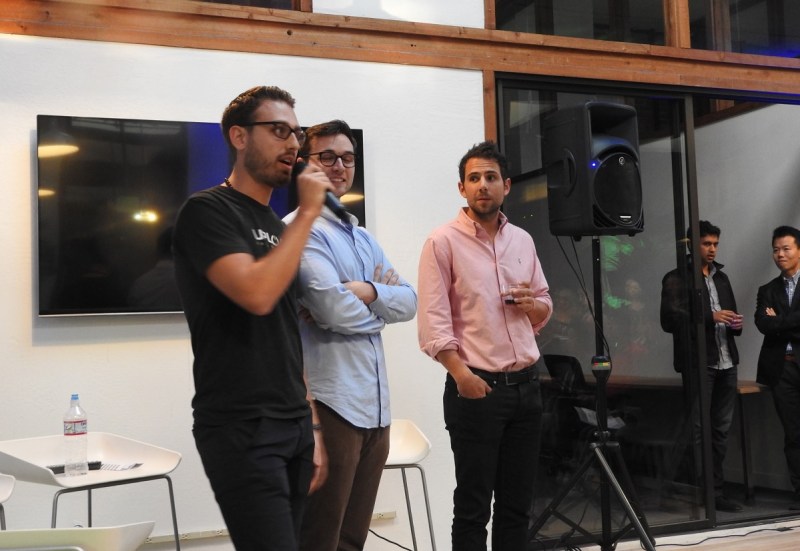 It feels like the start of something big, but it’s filled with the familiar hype that we have all learned to be leery of. I have lived through a few Silicon Valley hangovers, and they’re always preceded by irrational exuberance. I’ve enjoyed playing VR myself. I walked around the VR demos at the Upload Collective party last week, and I saw that kind of joy over and over.

I was telling people about my own family’s experience with VR, like how I marveled at the delight on my 12-year-old’s face as she stepped into her first virtual world experience. And I laughed at my colleague Heather as she experienced VR for the first time at the Upload Collective party. She even fell on the floor while shooting at some space pirates!

But I can’t put a number on these impressions yet. Would I pay $10 for a few minutes of this experience? Will I pay $60 for a 10-hour experience? Will the mass market adopt this admittedly very expensive technology? Should we bet all of our money on the hot new thing?

The investors at last night’s event don’t have the benefit of having numbers either. But that’s not stopping them. Jeff Wasson, a partner at Boost VC (an accelerator firm started by Adam Draper, a third-generation Silicon Valley venture capitalist), said his company invested in 34 VR companies in the past year. Wasson looked at a 1,000 VR startups during the same period. He believes enough in the technology to invest in early-stage VR companies once every 10.7 days. But it’s all a bet. He’s not confident he has found something yet that will just wow his 13-year-old daughter. 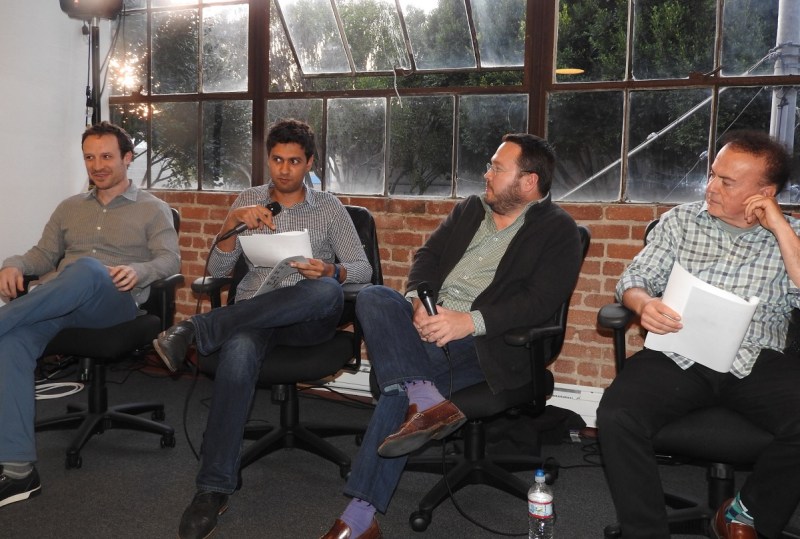 Now that’s pretty aggressive. Boost VC has put money into games, social, tools, hardware, and other parts of the ecosystem. I’m not saying that’s nuts. But it’s an indicator of the level of faith that Boost VC, which was founded 3.5 years ago, has in the good times ahead. How does the company figure out where to put its money in the absence of any real metrics?

Amitt Mahajan, cofounder of the $10 million VR fund Presence Capital, quizzed a group of investors on how they make investment decisions. Wasson said he invests in teams that have a superior knowledge compared to other teams that are also looking for money or already creating a product. Mahajan said that he looks closely at the technical acumen of the team in particular.

“We look at whether this startup can do something that can only be done in the new medium,” Wasson said. “And if it’s successful, can it be a big business? We look for passion that makes that success.”

Mahajan said his fund requires that startups asking for money have a working demo. Wasson said his fund mostly invests in teams with demos, but it will invest in some that don’t have demos because everything is changing so fast. Having a good Rolodex to do due diligence on entrepreneurs makes a big difference in whether you can invest with confidence.

Marco DeMiroz is a founder of the Venture Reality Fund, which filed papers last week saying it had raised $50 million for a VR and AR fund. His fund has put some money into startups such as Visionary VR already, even as it is just getting off the ground itself. It already has eight companies in its portfolio. He invests alongside other VR investors in syndication deals that give startups runway for about 12 to 18 months. He likes teams that complement each other’s skills.

“Right now, it’s all about the team and their vision that we invest in,” DeMiroz said. “Are they going to change the world? Are they doing something transformative? I think VR is going to transform every industry. Typically gaming leads every sector. It happened with PCs and mobile. Gaming innovates faster than any other sector. Behind that, there’s content and social plays, and we are looking at medical, industrial, and sports entertainment, training, education.”

But DeMiroz said it doesn’t make sense yet to invest in a console-scale game that takes a big team and a year or more to make. The market isn’t ready for that yet, he said. This year, Oculus VR might sell a million units, and the same might happen for HTC and Sony. 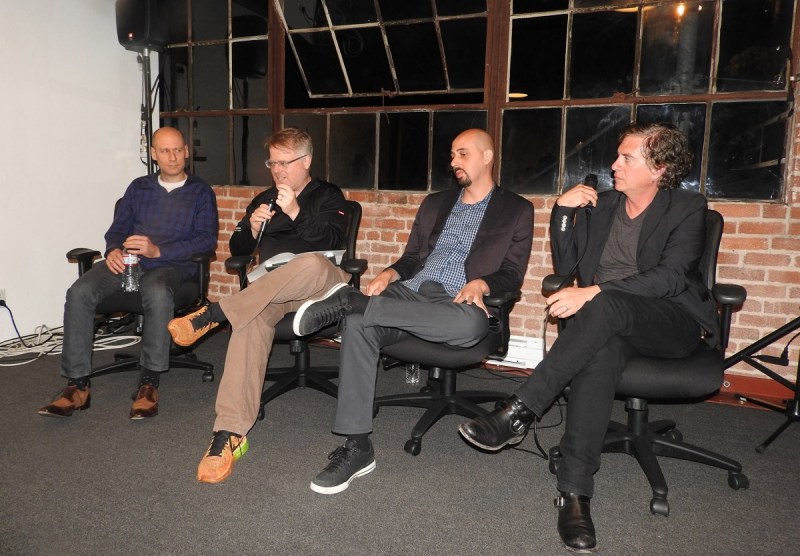 Greg Castle is already one of the lucky ones. He was part of the Scaleform team that produced the leaders of Oculus. When his friend Brendan Iribe moved over to run Oculus, Castle invested. He got a great pay day out of it and has become a full-time investor. He puts his money into the frontier of technology.

“It gave me a front-row seat to an amazing show. It all comes from conviction,” Castle said. “You have to believe that VR is going to be a big part of the future. The team matters immensely. There’s a substantial chance things will change quickly. It’s important that they have the right vision, and if things change, they can pivot quickly. We all believe that VR is going to play a major role in the future. There will be ups and downs. We believe VR is going to be a huge part of the future and that is why we are investing in it.”

Asked what he is excited about, Castle said he really enjoyed the Oculus Toy Box demo, where you play with a bunch of toys in VR with another friend.

“That communication is probably the most exciting and compelling application,” Castle said.

Peter Wilkins, CEO of Emergent VR, believes that VR will go through a trough of disappointment as the shipments this year inevitably don’t match up to expectations.

“We are going to enter a period that will cause a little bit of distress,” he said. “It’s going to come down to earth a little bit.”

Mahajan said he is excited about Paul Bettner’s Lucky’s Tale 3D platformer game launching shortly. He also said that he’s excited about industrial applications for augmented reality, such as getting an overlay of visual instructions when you look through glasses at an object that you’re trying to repair.

“There’s a bunch of companies doing that already,” Mahajan said.

Tony Parisi, a VR pioneer and a vice president at VR firm Wevr, said that he believes that providers of infrastructure, software, and services will also be good bets over time.

Robert Scoble, who is quitting a comfortable job as a tech pundit at Rackspace to join the Upload VR team, said that VR isn’t done yet. It still makes people seasick. We can’t use our fingers or legs. It has perhaps three decades of improvements to go through before we might be fully satisfied with the experience, he said. Within a short time, Scoble believes we’ll be wearing headsets for more than four hours a day.

But he recalled how at the dawn of the video game age, he played Pong for a thousand hours or so. He expects to do the same playing ping-pong with the Oculus Touch hand controls and Oculus Rift VR headset.

“I’ll spend a thousand hours just doing that,” he said.

Scoble said that he believes the wireless technology and fast Internet will be ready when augmented reality products start hitting the market a few years from now.

I happened to find the biggest believer in VR in the room. Amber Cordeaux, an entrepreneur who is part of Humense, a “human capture” hardware and software company in Sydney, Australia. She flew all the way across the Pacific Ocean just to be at the Upload Collective event, where she had a chance to have a conversation with Scoble. Now that’s a true believer.

“I couldn’t pass up this opportunity,” she said. 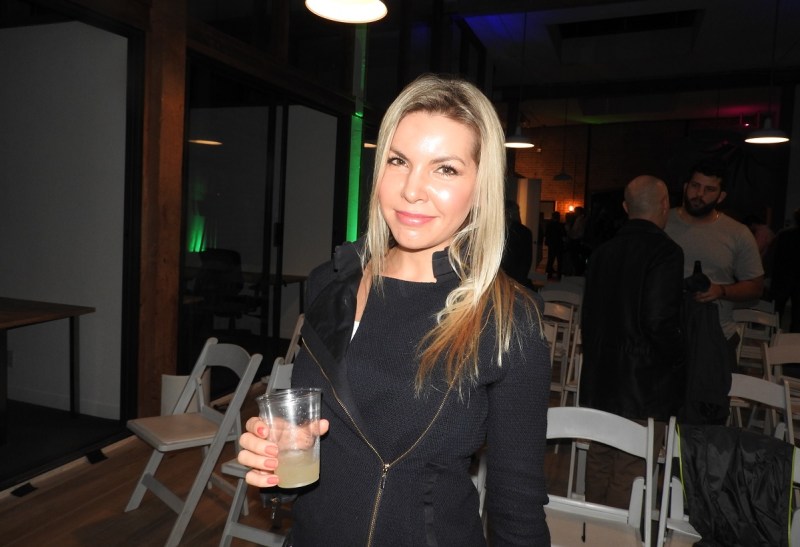 Above: Amber Cordeaux of Humense came from Australia to the Upload Collective event.