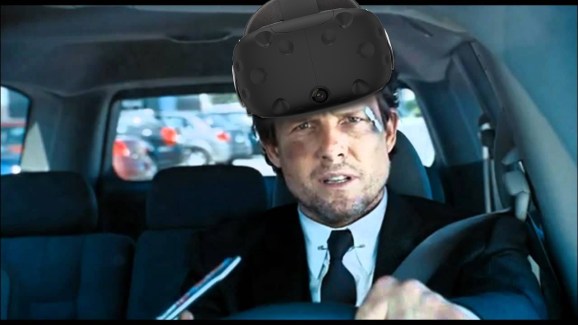 I hit a man last week. Actually, I hit him three times. Now, these were not deliberate acts of violence. No — they were accidental moments of virtual reality havoc.

If you remember the early days of Nintendo’s Wii motion-controller console, you can probably recall people breaking their televisions because they were flailing their arms around with the Wii Remotes and Nunchuks. Well, those days are back thanks to VR. Both the Oculus Rift and the HTC Vive support motion controls, and they are going to specialize in games that where you are standing up, moving around and swinging your arms like a wrecking ball. Experts, like the analysts at tech adviser Digi-Capital, claim VR will grow into a $30 billion business by 2020, but it may also stimulate the economy in the form of replacement televisions and medical bills.

I experienced it. At the Game Developers Conference last week, I tried VR Sports. This is a fun, highlight-reel version of hockey, baseball, basketball, and football that you control with Oculus’s Touch motion controller. It was during the dunk contest that I slammed the controller down into the arm of the person guiding me through the demo.

I apologized, and then I tried to do another far-too-fancy dunk (throwing the ball behind my back to grab it over my shoulder), and I hit him again. And then it happened again. At a certain point, I feel like it was the Oculus employee’s fault. He was holding the cord, but clearly I deserved to trip over it if I was going to get so incredibly wild with my dunks. I can tell you that developer Tin Guerrero — creative director with VR Sports creator Sanzaru Games — seemed like he knew to keep his distance.

But even an expertise with VR is not going to make everyone immune to destruction. Here’s developer Alexandre Bouchet — a specialist in VR and AR — taking out one of his TV sets:

Of course, we’re not even in the real “early days” of VR yet. The Rift launches next week, and we’ll start to learn more about how Oculus plans to protect people from themselves. I imagine that Facebook has some decent lawyers, and they’re gonna have their say whenever you boot into VR.

In April, HTC will launch its Vive that it’s co-developing with Steam operator (and SteamVR creator) Valve. We have a Vive Pre unit, and I hope that no one ever walks in front of me while I’m playing Ninja Trainer. If they do, you’ll have to come visit me in prison while I’m serving five-to-10 for manslaughter.