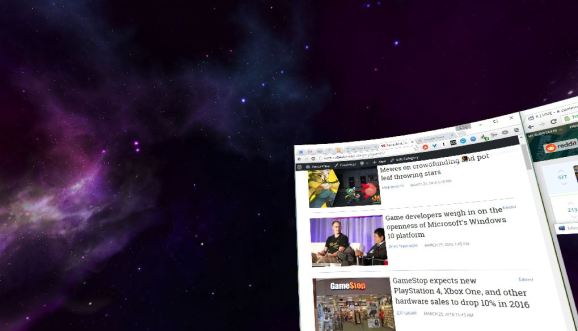 My Virtual Desktop is in space.

Most virtual reality experiences are over after about 20 minutes, so of course I just spent six hours doing my job inside of a simulated computer environment.

Virtual Desktop is an upcoming PC program that will enable anyone with an HTC Vive or Oculus Rift headset to emulate their desktop inside of a VR world. Developer Guy Godin is preparing to launch the app alongside the Rift on March 28 on Valve’s software-distribution portal Steam. While industry observers, like tech advisor Digi-Capital, are predicting that VR will generate $30 billion by 2020, only a portion of that will come from games. It’s clever apps for enterprise, creators, and artists that’ll make up the difference.

I got my hands on a copy of Virtual Desktop, and I decided to test it in the worst way possible: by doing my typical GamesBeat work day entirely in VR. I used the HTC Vive Pre headset and started my morning by putting it on and booting up SteamVR. Since then, I’ve only taken a break of about one or two hours, but the rest was all in the metaverse.

At first, the idea of using a VR headset to write about video games seemed silly, but I think I’m now a believer. This works. It has its benefits (along with some obvious drawbacks), and you may have some real reasons for using something like Virtual Desktop.

Most of my day is spent writing, and text is interesting in Virtual Desktop. These early headsets do not have a mega-high resolution, so you can still get the effect where it feels like you are looking at an image through a screen door. When I’m playing games, I don’t really notice that. But when I’m looking at small letters on a virtual screen, it’s way more apparent. Thankfully, you can adjust the screen’s size and distance to a point where almost everything is legible. And when it’s not, you can always lean in closer to the screen to get a better look.

But that brings up another thing about this app: It requires a lot more movement from you. To ensure that the text is readable, you need a screen that takes up around 140 degrees of your vision. But that also means you’ll need to whip your head from left to right and up and down to see everything. I got a notification on the bottom right of the screen. I clicked on it, and it opened up a chat window on the top left. Imagine having a 60-inch screen 2 feet from your face — that’s what it’s like.

But beyond word processing, I also did some video watching and editing with Virtual Desktop. Using a tool like Adobe Premiere was fine. I liked having the option to really blow up the part of the timeline I was cutting up. Watching videos is impressive. I loaded up several 360-degree YouTube videos, and Virtual Desktop handled them without an issue. Vive doesn’t have a VR video player yet — at least not one I’ve found — so having the option built into a fully functional computing environment is really nice.

I don’t know if I’ll keep working like this. I’ll have to see what my head feels like tonight. The straps of the Vive are definitely starting to chafe, and I’m worried I’m exhausting my neck muscles. But I can totally see myself popping on the headset during a lunch break to watch some Netflix videos or play some games in the virtual theater.