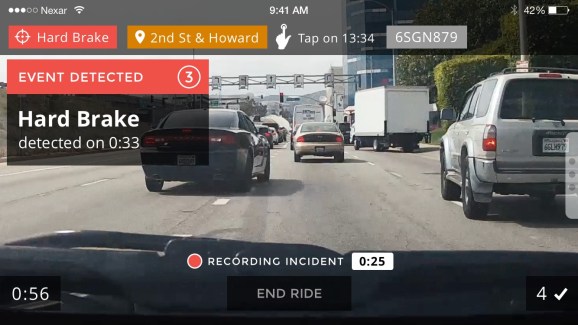 What do you get when you cross the smarts of an artificial intelligence (AI) dashcam app with the location and navigation prowess of Google? Apologies if you were expecting a hilarious punchline, but the answer is, in fact, Nexar.

So far, Nexar has pitched its inaugural product as the first AI dashcam app on the market, one which promises to transform your windshield-mounted iPhone into a smart camera that analyzes the road and recognizes traffic lights and bad drivers, while simultaneously recording events for posterity — should your insurance company require evidence in the event of a crash.

You can manually create an “incident” within the app by tapping on the screen or by issuing a “Hey Nexar” voice command, which captures events for the 20 seconds before and 20 seconds after it’s initiated. Alternatively, Nexar can also detect a “hard brake” or an accident and automatically uploads the video and corresponding data to the cloud.

Waze announced its new SDK back in January and included a number of notable companies for the launch, including Genesis Pulse, JustPark, Cornershop, Cabify, 99Taxis, and Lyft. Though it’s free to use, companies still have to apply, so access is not automatically granted.

Thanks to the Waze integration, Nexar users can now switch between the two services with minimal effort: a long tap opens a menu to input a destination.

Users can also receive turn-by-turn navigation through audio directions, negating the need to interact with the app directly. And this ties in with the underlying safety element that Nexar pitches as one of its core selling points — you can plug your destination in at the start of a ride and then simply let the dashcam do its thing from then on.

“Safety and navigation are both essential in creating an optimal driving experience,” said Nexar CEO Eran Shir. “Partnering with Waze, the world’s largest navigation app, is a perfect fit for us. Our users can now enjoy the peace of mind of driving with Nexar and still be able to get to their destination through the most efficient route.”

Though it is still early days for Nexar, which only launched in mid-February, the company raised a reasonable $4 million Series A round last May. It has aspirations to become something akin to what Waze has been since its inception almost ten years ago – in Nexar’s case, a network of crowdsourced data garnered from thousands or millions of smartphones plastered to a windshield.

Indeed, not only does Nexar record road conditions, including accident black spots, it can also keep tabs on specific dangerous drivers by remembering their licence plate and ranking them. So, you may be warned to avoid a driver in front of you if Nexar knows that they have a penchant for driving too fast and braking too hard.

But how, exactly, does Nexar plan to turn smart apps into revenue? Well, by “bringing insurance companies and fleets to the 21st century,” a spokesperson told VentureBeat. “We streamline insurance companies’ claims process with a unique accident reconstruction. We allow insurance companies to personalize their offerings and provide discounts to safe drivers.” Indeed, Nexar says it can recreate accidents in 3D, using a combination of an iPhone’s sensors and footage it captures.

For those concerned about Nexar using up all their iPhone storage, the company promises to never consume more than half of the available space — it can automatically scrub the video as it goes along if nothing noteworthy has been detected. And for those concerned that Nexar is an iPhone-only affair, fret not — we’re told an Android incarnation is launching later this year.

The updated Nexar iOS app with Waze integration can be downloaded now.