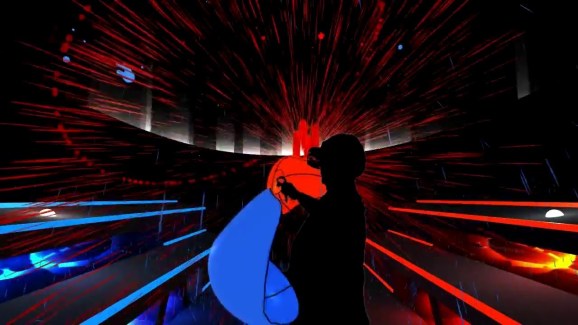 A mixed-reality image of a player inside of Audioshield.

I never owned a lot of music. As a kid, everyone around me would talk about their latest CD purchases, but I preferred engaging with the new tracks and classic hits when artists would combine them with other media like music videos, film, and — eventually — video games. The classic Nintendo rhythm game Elite Beat Agents is one of my all-time favorites because it enabled me to interact with music in a more direct way. Today, as virtual reality shifts from concept to consumer product, it’s another rhythm game that is the emerging tech’s first can’t-miss game.

Audioshield is a VR music game that comes out next month for the HTC Vive headset. Developer Dylan Fitterer built it for the headset-and-motion-controllers kit that HTC built in cooperation with Steam owner Valve because his rhythm game is a whole-body experience. Like Guitar Hero or AurdioSurf, notes come flying toward you, and you need to stay on beat with the music to successfully hit them. Unlike those games, the immersion of virtual reality makes it feel like the song is really overwhelming you physically. Tech adviser Digi-Capital is predicting that VR will generate $30 billion in spending by 2020, and it’s software like Audioshield — which I think everyone could pick up and enjoy — that could prove that estimate accurate.

I played Audioshield last night for the first time. I started by picking one of the featured songs from the jukebox-style playlist. That threw me into a dark room where red and blue orbs flew in my direction to the beat of the music. Using the red shield in my right hand and the blue shield in my other (which correspond to the Vive’s controllers), I immediately got into the flow of blocking the red notes with the red shield as they reached me. Occasionally, it would toss a purple note at me, which obviously required both the red and blue shield. Finally, for an extra visual oomph and bonus points, I could punch the notes to see a huge particle explosion.

And that’s it. That the game of Audioshield. But like with Elite Beat Agents, where the action is simply tapping buttons on a screen to a melody, Audioshield is deep and rewarding. You benefit from bopping your head to bass line. If you really know a song, you can kinda soften your gaze and relax your body so that it gets in tune with the beat and then you can put all of your conscious energy into making sure you put the correct shield in front of the right note.

Audioshield blew me away the instant I realized what it was, but I loved that I was able to type in the name of a band I love like Tame Impala to instantly call up some of their songs. The library pulls from Soundcloud, so you get a lot of dance remixes — but that works for this game.

Five minutes after I selected the Tame Impala single “Let It Happen,” my note punching had exhausted me. I also realized that I was leaning back and almost looking straight up because Audioshield had the notes lobbing toward me in an arching pattern. The music was literally bombarding me and beating me down with its ceaseless tempo.

I now have a physical, spatial memory of experiencing that song. “Let It Happen” will never come on the radio again without reminding me of the time I was in that room fending off explosive, colorful orbs. As a person who prefers experiencing music through other mediums, this was unforgettable.