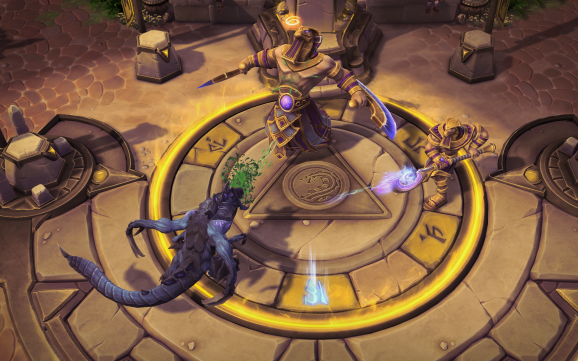 Heroes of the Storm's Dehaka.

Heroes of the Storm is getting plenty of goodies.

New content has come out today for Blizzard’s multiplayer online battle arena (MOBA). It includes a new character, Dehaka from the StarCraft universe, a new map, Lost Cavern, and allows character bans in Hero and Team League games. Bans are a popular feature also found in MOBAs like League of Legends. They allow players to keep out certain characters from the upcoming gaming, which makes team-making more complicated. Some MOBA fans have accused Heroes of the Storm for being too simple, so this feature could make it more attractive to those who enjoy complicated esports games. Intelligence firm SuperData Research projects esports will generate $2 billion in revenue by 2018

Dehaka is a Melee Warrior class of character, meaning he’s best used for close-quarters fighting and, while he doesn’t deal a lot of damage, has a lot of health. He also has abilities that allow him to hide and heal himself, which make him very difficult to kill.

Lost Cavern is a very different kind of map for Heroes of the Storm, which usually features large levels with multiple lanes and objectives. Lost Cavern has just one lane, no mercenary camps (groups of nonplayer characters that you can kill for experience and other bonuses), and it doesn’t allow players to teleport back to their base. It focuses instead on intense, fast-paced action on a smaller map.