Airfare prediction startup Hopper has nabbed $16 million in a round led by BDC Capital IT Venture Fund, along with existing investors Omers Ventures, Accomplice, and Brightspark Ventures. This takes the company’s total funding to $38 million.

Hopper’s price-prediction algorithm serves to answer one question: Should I buy my flight now, or should I wait? 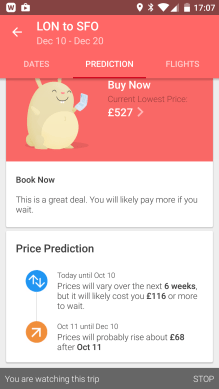 Founded out of Cambridge, Massachusetts in 2010, Hopper largely consumed its early years building backend smarts and archiving trillions of flight prices. While it had offered web reports for some time, in 2014 Hopper teased what it had in store with the launch of a last-minute flight-booking app called GTFO (Get the Flight Out), which it touted as a “fun little experiment.” The main Hopper app launched on iPhones in early 2015, and it arrived on Android seven months ago. Together the apps have notched up 3 million downloads so far.

In a nutshell, Hopper tracks millions of flights each day to predict the optimal time to book a flight, and the company claims it can save you as much as 40 percent on the cost of a flight. A user simply inputs their planned travel dates to receive alerts via push notifications about whether the price is likely to rise or fall.

Now, if you’re one of those people who think that flight prices are only ever likely to increase and that you should always book as early as possible, according to Hopper’s data, you’re wrong. Apparently, the prices for two-thirds of flights will drop at some point prior to departure. Additionally, airlines often set fares conservatively at first and are often willing to drop prices if anticipated demand isn’t met.

With an extra $16 million in its coffers, Hopper said that it will push for “continued growth” and will expand its teams in Montreal and Cambridge.