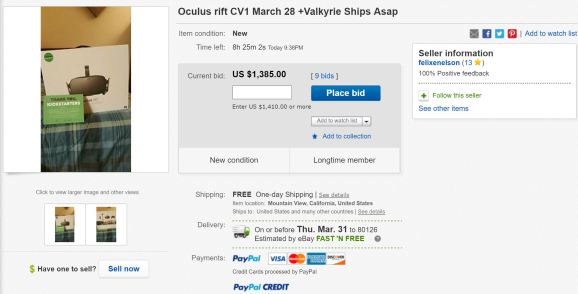 Some people can't wait until July.

You can’t time travel to a future when Oculus has already delivered your headset, but you have some other options available — if your bank account is healthy.

The consumer version of the Rift that started arriving yesterday to people who backed the original crowdfunding campaign is going for more than $1,100 in multiple eBay auctions. As of the time of this writing, one auction is at $1,175 after 11 bids with three hours left before it comes to an end. Another one, which wraps up in eight hours, is already at $1,385. Analysts from firms like SuperData Research and tech adviser Digi-Capital predict VR could $30 billion to $40 billion by 2020, and it looks like eBay will get a small cut of that money early on.

Hype levels for virtual reality are high after the first shipments started arriving yesterday. Rift’s first wave of games are now live on the Oculus Store, and many people are sick of waiting for the long-promised VR future. The problem is that if you were to buy a new Oculus Rift today, you’d have to wait until July before it would ship. So with people excited and demanding the headset, the second-hand market is off to a quick start.

Hell, people are even paying between $600 and $700 for the older Development Kit 2 version of the Oculus Rift, which is more than the $600 price of the superior consumer version. It’s also way more than the original $350 price that Oculus charged for the DK2s in 2015.

All of this is a positive sign for VR. Analysts are expecting Oculus to sell around 500,000 Rift units this year, but it’s not alone. Competitors HTC and Sony are also launching high-end VR headsets in 2016. HTC’s Vive, which it built in partnership with Steam, begins shipping April 5. Sony is going to release PlayStation VR in October. Consumers have also bought up all the preorders for each of those systems.