The mighty Google has made an ever-so-subtle change to its domain-name buying service, Google Domains: It’s now hosted on its very own “.Google” top-level domain (TLD). Anyone visiting “domains.google.com” or “google.com/domains” will now be redirected to “domains.google.”

The Internet has been opened to countless TLDs beyond the likes of .com, .net, .org, or .edu since ICANN first revealed plans to extend things back in 2011. The upshot of this is that companies can not only buy industry-specific domains, such as “.florist,” they can also try to nab their very own unique “closed” TLD — such as .Google. This is what Google has done, and although Google Domains represents the company’s first official use of its own TLD, it has dabbled with it in the past.

For example, way back in 2014, Google switched on its TLD for the first time with a “nic.Google” domain that redirected to its Registry page, where the company outlines plans to sell a slew of brand-new TLDs, such as “.meme” and “.app. Then, as part of its April Fools’ Day celebrations last year, Google reversed its main homepage — including the URL, which became “com.Google” — for one day. And without announcing it, Google’s Registry page finally transferred over to a .Google domain back in September, though this was done on the quiet. Now it seems Google is ready to shout about it. Or, at least, quietly blog about it. 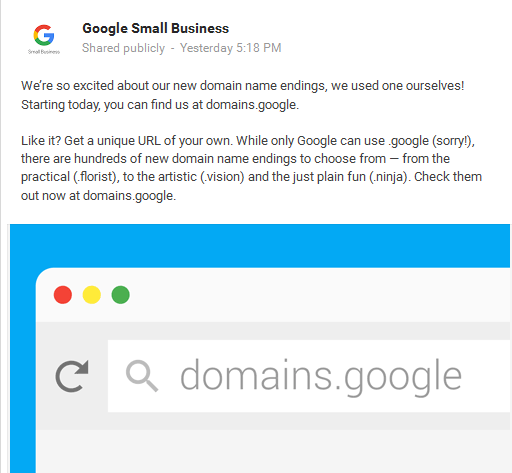 Google Domains opened to everyone in the U.S. back in January 2015, and it remains a beta product for now. That the product is now hosted on its very own .Google domain is a symbolic evolution not only for the Google Domains service, but for Google’s aspirations as a TLD registrar.

Indeed, while .Google will only ever be available for Google’s own properties — that is, after all, the whole point of a branded TLD — Google has been increasingly embracing other new TLDs. Back in October, it announced 90 new top-level domains and custom email addresses — covering .energy, .media, .pizza, .cool, .voyage, and more — available for anyone in the U.S. Switching Google Domains to its own unique TLD serves as an effective reminder that people don’t have to choose a boring old “.com” or a “.net.”

Now that Google has two of its properties hosted on a .Google domain, one could speculate that the Internet giant is toying with moving other properties over. While it’s unlikely that its flagship “Google.com” portal will be replaced by a “Google.Google,” we could start seeing other services get the full DOT GOOGLE treatment going forward.