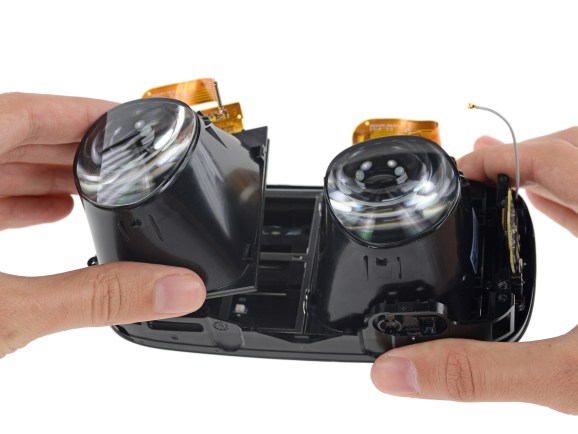 The inside of an Oculus Rift.

If you just spent $600 on an Oculus Rift virtual reality headset, you probably don’t want start ripping into it with a screwdriver. Thankfully, other people can handle that.

The Oculus Rift is moderately easy to repair, according to the crowdsourced repair-guide site iFixit. The company posted its teardown of the head-mounted display from Facebook subsidiary Oculus VR, and its team found that the Rift is difficult to get inside of and it has a lot of ribbon cables that are easy to damage. Despite these issues, iFixit still scored the Rift a 7 out of 10 for “repairability” because it has efficient cable management and easy-to-remove earpieces. We’re in the early days of a VR market that could go on to make $30 billion in revenues by 2020, according to analysts at tech adviser Digi-Capital, but iFixit has revealed that Oculus has used years of knowledge from releasing development kits to deliver a device with a lot of smart design choices.

The breakdown also reveals that Rift is not using the same screen as a Samsung Galaxy Note. Instead, Rift features two custom displays that are 90mm diagonally each and with 456 pixels per inch. As iFixit points out, that’s better than the 401 ppi of the iPhone 6S Plus, but it’s well below the Galaxy S7’s 576 ppi.

You’ll still see the pixels in a Rift because of the optical lenses that you look through to see the screens. The headset features a pair of hybrid Fresnel lenses that make those 90mm displays look far away and huge, which emphasizes the distinction between each pixel. Fresnel lenses feature a series of concentric circles that help bend the light from the displays so that it can wrap around your field of view.

But these ar especial Fresnel lenses that have a varying thickness, which means you can change the focus of your Rift by simply moving the headset up and down vertically while it’s over your eyes.

Finally, iFixit provided a list of the chips that you’ll find inside of a Rift:

Check out iFixit for a more thorough look at the innard of the first high-end VR headset.