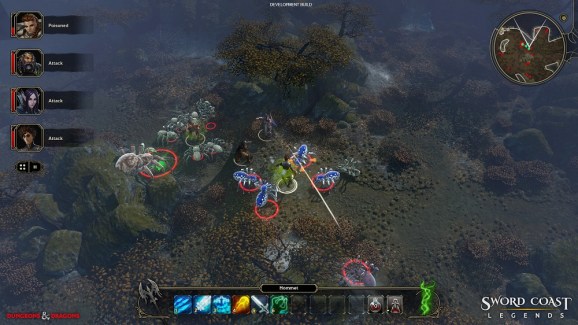 Spiders. It had to be spiders.

The studio behind Sword Coast Legends has shut its doors, and Dungeons & Dragons publisher Wizards of the Coast is figuring out the future for the role-playing game’s DLC and upcoming PlayStation 4 and Xbox One releases.

Wizards of the Coast confirmed today that N-Space is no more. As for the upcoming Rage of Demons expansion for Sword Coast Legends, the D&D maker is looking toward Digital Extremes, the game’s PC publisher, for the fate of the downloadable content.

“Yes, N-Space is shutting down, and we are super-sad about it. We are proud of everything they did in bringing Sword Coast Legends to D&D fans, and we sincerely hope everyone at N-Space lands on their feet,” a Wizards of the Coast spokesperson told GamesBeat via email. “As for Sword Coast Legends going forward, it is unclear at this time, but we are working with Digital Extremes, the official PC publisher, to make sure everyone has the best possible experience with the game. Right now, we believe the Rage of Demons DLC will be released for PC, but we are confirming with Digital Extremes.”

The Wizards of the Coast spokesperson also said that according to Digital Extremes, “the console versions are complete, and they intend to release the PS4 and Xbox One versions of Sword Coast Legends. The timing isn’t confirmed, but we’re hopeful that they will release soon.”

N-Space’s Sword Coast Legends came out in 2015, but it met with some mixed reviews (including GamesBeat‘s take) and a 61 on review aggregator Metacritic. It received criticism for its adaptation of D&D rules, among other issues. One of its more anticipated features was its Dungeon Master mode, which enables players to have one person act as a traditional DM while others take on player roles. But its tools are limited compared to the mode’s ambitions.

N-Space debuted in 1994 and has worked on a number of games, including many ports, in its 21-year history. The news first broke yesterday when Ben O’Leary, an artist at N-Space, tweeted that the studio had closed along with a statement.

In a March 2015 interview, Wizards of the Coast’s Nathan Stewart, the brand director for Dungeons & Dragons, and N-Space president Dan Tudge talked about how Sword Coast Legends would be a “digital boxed set” for future adventures.

“We have a long tail planned for supporting it,” Steward said. “We have a long-term partnership together. We’ll be telling stories together for a long time.”

N-Space isn’t going to be a part of that future.