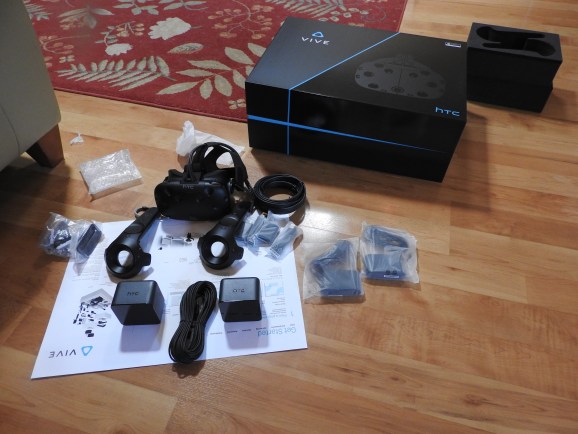 Here's what you get in an HTC Vive.

GamesBeat’s got a Vive in the house. Here’s our unboxing video of the HTC Vive virtual reality headset. HTC will begin shipping the Vive next week to those who preordered it for $800.

The Vive is one of the most highly anticipated VR headsets arriving on the PC, hot on the tails of the March 28 introduction of the Oculus Rift from Facebook’s Oculus VR division. VR is expected to be a $30 billion industry by 2020, according to tech adviser Digi-Capital.

The Vive comes in a hefty box, and it’s bigger than the Oculus Rift box because it comes with base stations that serve as sensors for a “room scale” VR experience. Those sensors help detect your body movements and where your head is pointing at any given moment. They also keep you from tripping over your own furniture.

The video shows the headset, the sensors, and the touch controllers. There’s also a converter box and some more cords and a wipe cloth in the blue side panel that I didn’t show in my video. The Vive setup software is available on a website, and it says that setup time should be about 28 minutes, so long as you’ve planned ahead on where to put the sensors.